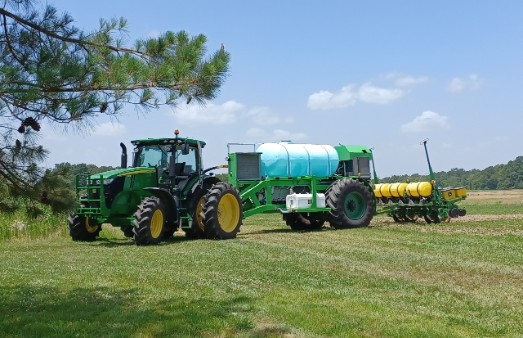 The ultra-high pressure fluid jet technology Susterre is pioneering is the brainchild of two inventors who knew they were onto something that could solve a problem for the agriculture industry. Their challenge was they didn’t have the agriculture equipment experience to get it to market.

It can be difficult for very early-stage Canadian companies to find capital and advice to scale up and commercialize. So, FCC took the opportunity to partner with AVAC, who created a new approach to supporting Susterre through Carrot Ventures.

To bring this technology to market, Carrot Ventures recruited an experienced executive, Michael Cully, to be Founder and CEO of Susterre Technologies, a new ag tech company formed by Carrot. Carrot then led the first round of financing, investing over $1.5 million of the capital Cully raised. All of this follows Carrot’s unique Company Formation Model.

“One of FCC’s areas of focus is to help foster innovation in Canadian agriculture. AVAC has experience in the space as well as having a similar mandate as FCC – advancing Canadian agriculture,” says Darann Sauer, FCC’s Manager, Venture Capital. “Carrot sets these companies up for success by removing common problems many start-ups face. They put intellectual property in the hands of experienced leaders with the knowledge, mindset and skills to bring promising technology to the market. This results in a well financed company built around strong technology that solves a big problem in Canada’s agricultural sector.”

It was a good fit for Cully as well, given his long experience in the agricultural implements space. After doing his own due diligence on the Susterre proposal, he saw the problem farmers face with residue buildup and knew this technology could solve it.

“Residue buildup is a very significant issue farmers face. Even farmers who use no-till and cover crops end up tilling their soil every three or four seasons. With existing technology, dealing with built-up residue means they’ll eventually need to start over,” explains Cully.

The use of ultra-high pressure water jets in manufacturing environments to cut metal is well established. Applying this proven technology to no-till farming, water is pumped at 60,000 pounds per square inch, which easily cuts through crop residue, allowing farmers to practice no-till for as long as they like.

The goals of conservation tillage are to stop the loss of topsoil, reduce the need for fertilizer, minimize chemical runoff and rebuild soil structure. It’s estimated that no-till methods can sequester an average of 0.3 metric tons of carbon per acre, helping reduce the carbon footprint of crop production. These benefits combine to improve soil health, which increases the farmer’s yield and profitability.

“I thought it was fantastic to be a part of the solution. There’s more and more pressure on farmers today to address their environmental impact. Everyone’s trying to incent farmers to go to practices that lower the use of chemicals and water, prevent runoff from the field, and prevent soil erosion,” says Cully. “Here we have technology that can do all that and provide higher profits and better yields for producers.”

“Farmers face extreme financial pressure. Input costs have gone through the roof, so they have to be careful how they apply seed and chemicals. They often overapply both to maximize germination and yield, knowing they will lose some chemicals to run off.

“Susterre improves germination because we increase the soil-to-seed contact from an agronomic standpoint. By injecting fluid into the soil, we avoid chemical runoff into the waterways.”

Knowing the potential, Cully and his team got right down to work after securing the seed funding through Carrot. They began to scale up the technology by gathering the scientific data to prove it works, and will soon start commercial distribution with a goal of improving no-till farming practices on North American farms.

Realizing that potential can only happen with the right team in place, including strategic investors like Carrot Ventures.

Sauer says FCC is thrilled to see Susterre making the progress it already has. “It feels satisfying. It’s early days for Susterre, but they have an extremely interesting technology that looks like it could have a big impact on how growers can more easily adopt no-till practices. FCC’s venture capital program is designed to foster an environment in which innovation in the Canadian agriculture industry is more easily developed and adopted to feed the planet. This investment is just one step in fulfilling FCC’s higher purpose.”

Cully appreciates the endorsement and the investment. “To be able to rely on Carrot Ventures to give us that kick-start so we could quickly get into the field and prove everything at a farmer level is so impactful for us.”

“They were very helpful in getting the legal and corporate structure of the company together. We’re already set up as a much more mature company than most startups. We have good corporate governance and are structured for long-term growth.”

The AVAC and FCC partnership in Carrot Ventures means that innovations like those led by Susterre have an opportunity to come to market and solve substantial agriculture problems. It’s these collaborative relationships that help us reach our goal of sustainably feeding a growing global population.