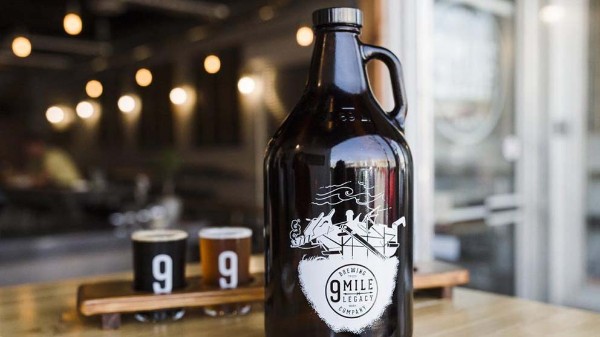 Saskatoon-based 9 Mile Legacy Brewing is embracing the popularity of its latest craft beer, made with durum wheat grown in southwest Saskatchewan.

Shawn Moen, 9 Mile Legacy co-founder and CEO, tweeted @9MileLegacy that there is a thirst for their new beer, No. 1 Durum Wheat Ale. “This beer has proven much more popular than we imagined! It will take a little time to fully build out our distribution. Starting in SW Sask and growing from there.”

No. 1 Durum Wheat Ale is the realization of a dream for Shawn and 9 Mile Legacy co-founder and COO Garrett Pederson, who grew up on farms nine miles apart in southwest Saskatchewan. They both believed there was opportunity to locally manufacture more of what they grew in the area.

Durum wheat is traditionally ground into semolina flour and used in making pasta, with most of that secondary and tertiary production taking place outside Saskatchewan.

“In my view, the beauty of a project like this is in its broader potential. I hope that No. 1 Durum Wheat Ale will inspire Saskatchewanians to think creatively about the many different things we can do with our excellent agricultural products,” says Shawn. “The fact that this project resulted in a delicious beer underscores that any ag-value initiatives we undertake can also aspire to excellence!”

The durum wheat addition to 9 Mile’s craft beer lineup comes after an already innovative year forced on them by the pandemic. The nano brewery had to abandon some plans early on in 2020, push faster with others and in some cases, create something totally new.

“We always chuckled a bit about breweries being considered an essential service, but I really embraced the idea. I asked, ‘what sort of things do we do that make us essential?’ I really think it’s the ability to connect people and to bring people joy.”

At the onset of the lockdown, the business lost 90% of their sales channels overnight. Reframing their challenges as opportunities, Shawn and Garrett worked together to change direction, accelerating a strategic growth plan that was already in place.

“We focused on our digital ecosystem and our ability to connect with people from a retail perspective,” explains Shawn. “Our digital expansion included the launch of our virtual taproom, which we had already planned for. With effort and expense, we were able to build sales back up to 65% of where they were before the pandemic.”

Planning proved to be critical to 9 Mile Legacy’s ability to adapt. They had created their strategic plan in 2018, when they partnered with FCC to grow their business while retaining their core values.

“Everything was secured for the expansion by November 2019. I think good luck comes to people who are prepared.”

Shawn remembers talking through his expansion plans with his Relationship Manager, Celine Hildebrand. “I can still hear Celine say ‘so quickly? We just met!’” Shawn smiles. “FCC was right behind us as we planned a new, larger facility.”

“Everyone at FCC has been keen to understand our business and they’ve been great sounding boards. We’re in the food and beverage sector, which isn’t FCC’s traditional business, but what FCC understands is seasonal risk and volatility. I think that came to the forefront with the pandemic, but certainly whenever you’re growing. There are lessons from the ag production side of things that lend themselves to a relationship with a brewery, which is capital intensive as you’re growing. It’s like every time we’re buying a new fermenter, we’re buying a new combine.”

FCC’s support meant 9 Mile Legacy could also start selling beer in cans, something Shawn says changed the game for them and allowed them to avoid laying anyone off in 2020.

A self-described “farm boy through and through”, Shawn says his and Garrett’s rural values are a part of why the nano brewery is thriving.

Shawn and Garrett love finding solutions that keep their business evolving. The No. 1 Durum Wheat Ale had unique significance for the 9 Mile Legacy Brewing team. Both founders hail from the Cabri and Abbey, Saskatchewan, area and several other team members also have family roots in the Southwest.

“As a kid that grew up in southwest Saskatchewan, we hauled a lot of durum! So I really wanted to make this work as a beer,” remarks Garrett.

“My mind immediately went to ‘what are the challenges of this project,’ because durum really hasn’t been used in brewing in North America or elsewhere in the world. It’s an unmalted product, which adds a level of difficulty in the brewhouse.”