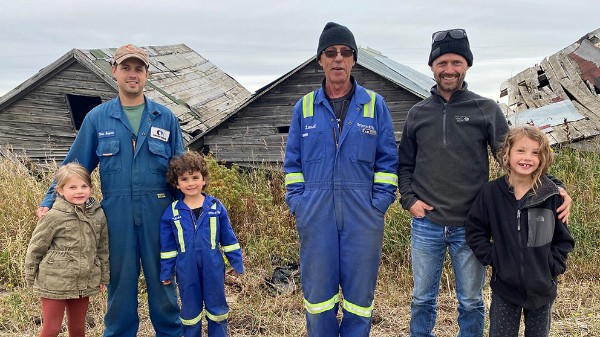 FCC is proud to celebrate Francophonie week, March 13 – 21, which honours the richness and diversity of French-language culture. At FCC, we’re committed to offering our services in both official languages.

“French is very important to us and it made a big difference in where we did business.” –Mathieu Bergeron, FCC customer.

In 1954, Mathieu Bergeron’s French-speaking grandfather moved from Quebec to the new farming frontier of northern Alberta. The heavily treed area near St. Isidore, had to be cleared to make way for a farm.

Mathieu is now in charge, carrying on his pioneer grandfather’s legacy on the family farm and speaking French while doing it. It’s all they speak on the farm and that means having a lender who understands why that’s important, matters.

Mathieu says speaking French with his first Relationship Manager (RM) at the Falher office made him feel like FCC was family right from the start. When she left, he said it was easy to welcome their new RM, Ariane Coté, into the fold because she, too, grew up on a French-speaking family farm in the area.

“Ariane and I went to the same francophone school, although she’s younger than me. We’re in the process of getting a new loan right now and we’re going with FCC because it’s the relationship that counts. It’s family as much as it’s business.”

As one of two French-speaking people at FCC’s Falher office, Ariane says the common background with customers establishes trust and makes it easier to understand each other.

“I’m an old soul and I value my bilingual office and my hometown,” says Ariane. “I have about a dozen French customers and it comforts them to know when they call FCC, there is someone at the office who speaks French. We do talk English sometimes too or 'Frenglish’, a combination of both,” she laughs.

“I think it adds a connection piece to our customers. Lots of people here are French-speaking or have French heritage.”

While new generations may start to lose their language, Mathieu is committed to carrying it on.

“It was always important for my grandma and grandpa and our parents as well to speak French. Everything was in French. It’s the same on the farm. Sometimes we have trouble finding help because everything is in French and that means if there’s an English speaker who comes to help, he won’t understand what’s going on over the radio. But that’s the way it is. We do what we can to ensure it continues in French, it keeps it more family-oriented. It’s a little less corporate,” Mathieu explains.

Ariane can relate. She sees younger generations spending less time practicing their French and knows it can be challenging to find fluent French speakers for FCC’s bilingual offices.

“I hope to see FCC put itself out in the community. Not a lot of younger people know what FCC is or does or how great of a company it is to work for. I think it would be nice to have FCC put itself out there to young job seekers and at French universities where students may not know the opportunity that exists here for French speakers.”

Every day, she sees the value of talking farming in French. A reference point, a common value and shared history create stronger customer relationships.