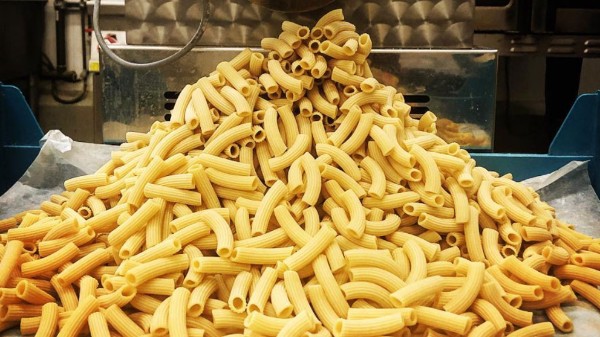 With a nod to World Pasta Day this October, Lina DiGaeta of Delizia’s Pasta shares how her family-owned business has created a recipe for business success (and amazing fresh pasta) in a constantly changing food marketplace.

Lina and her husband, Emilio, run the business along with their son Joe who is Delizia’s production manager and business operator. Lina affectionately says, “Joe has been our go-to for 17 years.”

Lina recently told Doug Wilson, FCC Senior Director of Corporate and Commercial Financing, that after 30 years the Calgary-based business is experiencing one of its most exciting growth periods.

“It took a long time to get here but it feels like there’s a light at the end of the tunnel,” shared Lina.

That sentiment follows the difficult situation the local pasta maker was facing when the pandemic shut down restaurants in March 2020. Delizia’s Pasta was a major supplier of fresh pasta when the demand dropped off overnight.

“Today I can say the business has grown so much. But in March 2020, I thought ‘what are we going to do?’ Restaurants, golf courses and hotels were all shut down. There was nowhere to distribute because everything came to a halt.”

Their recovery in the weeks and months that followed was born out of a strong work ethic, innovation and a commitment to customer relationships. Lina’s husband, Emilio, first established these values when he bought the business in the late 1980s.

The couple was newly married. Lina was a hair stylist and Emilio worked with his family’s business, the Italian Super Market in Calgary. Because he wanted something for himself, he jumped at an opportunity to be a partner in a pasta company, and eventually became the sole owner.

In the beginning, they were making delicious pasta creations for restaurants but were working to build relationships with local grocers. Eventually, an opportunity came down the grocery aisle.

Delizia’s Pasta went from serving a few Calgary restaurants to making food for CO-OP stores, like ready-made meals, ravioli or tortellini and sauce. Their quality product and personal touch attracted other grocery store chains in the following years, including Safeway, Costco and Loblaws.

A growing customer base in both the retail and service sectors meant strategic planning to get the right equipment in place and eventually move into their own building, purchases FCC helped finance in 2006.

“Moving to our own building was exciting and scary at the same time, because as much as you have a business plan in place, you just don’t know what tomorrow brings. The plan is always to grow and look forward, but along the way, any business eventually has to go back to the drawing board and say ‘where do we belong, what should we be doing?’” said Lina.

An important shift came when Delizia’s Pasta was approached about the concept of home delivery and food prep service. This move would become valuable following the start of the pandemic, which Lina says was the biggest hurdle of all time.

“Everything stopped in March 2020. No one called. Total paralysis of the industry, pretty scary. We didn’t know what we would do. Then people realized if they couldn’t come to us, we’d go to them.”

Delizia’s Pasta was approached by a food delivery company that was looking for fresh pasta. Lina explains, “they were buying 300 kilograms of pasta, then 700 kilos once every two weeks to once every week, depending on their menus. The home delivery and food prep service has now resulted in demand for 1,000 kilograms of pasta a day. We had to purchase equipment to keep up. We are their western Canada supplier. It’s gone from ‘sheesh who are these guys’ to ‘thank God they came along.’”

She adds, “This has been the best business we’ve had in all our 30 years.”

Lina says their relationships and their products built Delizia’s Pasta into what it is today.

“We had support along the way from food distribution groups and also personal relationships with chefs who have supported us and carried us through to this day. We can go back to 1989 and we still have relationships with the same chefs and restaurants after all these years.”

With a lot more equipment than they had in the 1980s, they have an efficient system with five staff members who fill the craving for hearty plates of real Italian pasta.

“It’s crazy to think of how far we’ve come. We’ve streamlined everything, we take care of our food service and restaurant business customers, we do a little bit of retail. We’ve been able to create our processes to make sure everyone’s getting what they need and they’re happy.”