After 50 years, a customer credits FCC with his family farm’s survival 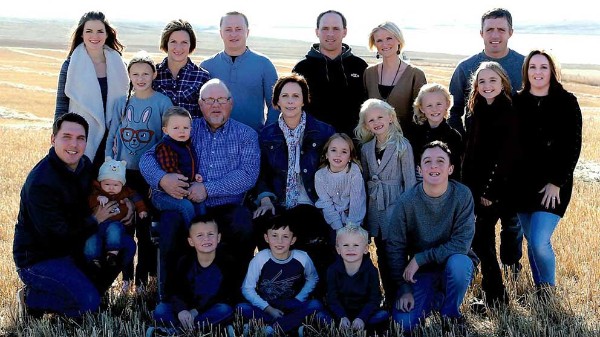 "I've been through thick and thin and when it was thin, Farm Credit was there for me." Greg Becker, farmer and FCC customer

Kindersley, Saskatchewan, farmer Greg Becker is ready to celebrate. The 2020 harvest is the 50th time he has put a crop in the bin. It’s a major milestone for anyone who has weathered the challenges that come with producing food from the land.

On top of that, this November, he’ll make his final payment to FCC on the land he’s been farming for 50 straight years. That land has been a source of joy, struggle and tremendous reward, bonding a family through decades of highs and lows they can now look back on with an appreciation for the journey.

“I told everyone at the FCC office I am coming in on the day my last payment goes through and we are celebrating. I’ll bring the champagne!” Greg chuckled as he spoke to us during a rain delay in combining this fall.

Greg bought the land at 18 and was later joined on the farm by his young wife Shelley, who had no farming background. Greg admits she didn’t really know what she was getting into, but she “bit hard” and has never looked back. She loves farming the same as he does.

The couple has four grown children: Gary, Aaron, Jill and Landon. As kids, they all worked the farm with their parents, putting in long hours and developing a great work ethic.

"I’m sitting here talking to you with tears in my eyes because my memories are good. I love farming. I'm thankful for Farm Credit Canada."

“I have to credit the success of the farm to my wife and the kids. Shelley drove combine, fed cows and made supper every day and my kids, they ran the tractor,” Greg explains. “We had two old tractors and I would get up at 4:30 a.m. and start summer fallowing, then Shelley would bring Aaron, Gary and Landon over to where I was working at 8:30 a.m. with a lunch pail and then we would summer fallow all day, but we always went home at supper time. That was key. It didn't matter if we were 15 miles away, we came home at supper and picked up again in the evening. If we all didn't work, we wouldn't have survived.”

At harvest time, all 4 Becker children were hard at work with their parents. Many days the boys were combining, and Jill was operating the baler.

Greg also says that without FCC, this last half-century would have looked a lot different for the Becker family farm.

"I’m sitting here talking to you with tears in my eyes because my memories are good. I love farming. I'm thankful for Farm Credit Canada because it could have been all over in the ’80s. But they're the guys that gave me a second chance. It's unbelievable, this life."

Greg was in Grade 12 when he heard a nearby farmer was selling some land. Energetic and ambitious from day 1, he went to the bank to see about getting his start in agriculture.

“I put $900 down in April 1970 and got a loan for the rest to buy that first quarter of land. My dad had machinery so I could slowly buy into the machinery as well. We had a good crop in 1970 and I made enough to pay for that quarter and a half-ton truck.”

Greg farmed for a few more years and was able to buy another quarter section of land for $9,800. Feeling confident, he continued to expand quickly.

After three droughts in a row, the money wasn’t coming in like it used to and interest rates were over 20%. Greg remembers having three quarters of land paid for, but he over-borrowed at the high interest rate, then was unable to grow a crop. “So I remortgaged everything to keep everything going and the bottom just fell out and I lost it all,” he said.

"I had four little children and then the transmission goes out in the Suburban. It was a horror story, I’ll tell you."

“That one hurt. I will never forget the day the bank said, ‘You are done. You can put money in the bank, but you can't get any out.’ It was a blur, I don't know how we made it. We had very little grain in the bin because there was no crop and then the bank shut me off. I had four little children and then the transmission goes out in the Suburban. It was a horror story, I’ll tell you.”

Greg recalls Shelley calling him in the shop one night to tell him she was picking up KFC for dinner for the family. “She went to the bank to get $20 out. The teller handed her $20 then realized there was only $17 in the account so she whipped that $20 out of Shelley’s hand and said, ‘Sorry, you don't get it.’ She came home crying. There was no KFC that night. She was heartbroken, I guess we all were, and out came the wieners.”

Whether it was finding something to eat for supper or pulling the farm back from broke, Greg was determined to work with what he had in any situation.

“When you were in trouble, the Saskatchewan government said if you don't fight the banks, they will rent you back the land for six years. So, I did that and in 1996 I could buy the land back and Farm Credit was the one to give me the money. FCC had always been a part of my farming operation and it turned out when I needed help the most, they were the ones that let me back in.”

Greg bought six quarters back and had a willing partner in FCC. “If you went in and needed a deferred payment, they were very easy to talk to if you kept in touch with them. It's a partnership that way. You both put time in.”

Greg also met Pat Toner, then an FCC Relationship Manager (RM). He came from a cattle farm and suggested the Beckers get into mixed farming as a way to diversify their income.

“To start the cow operation, I cut out an old bin and used old poles to make a fence with barbed wire,” Greg recalls. “We bought our first cows in 1990. My wife bought a cow, my oldest boy bought a cow. He was 10 years old, my daughter was 8-and-a-half and had enough money to buy a cow. And I had enough to get a cow. Paid cash.”

Committed to never overspend on buildings and machinery, the family went to work fixing up old equipment to help with making cattle feed. They didn’t owe any money on the cows and the first year they sold four calves. Today, they run a 200-head operation.

Important lessons learned along the way

“My advice to a young farmer is, keep your capital costs down. The worst thing you can stick your neck out on is machinery and bins. Buy good used stuff. Do you need the big shop and all the bins? Not the best of everything.

Vanessa Poulter is the Becker’s current RM at the Kindersley office.

She says of Greg, “He's really passionate about what he does. He isn't one of those people who thinks you have to be the biggest or the best as far as equipment or farm size goes. So he's a great customer because he understands how to make good choices for the operation and not get carried away.”

Vanessa also has Greg’s son Aaron and his wife Annika as customers. Greg and Aaron work together but Aaron also runs his own farming operation in the area. Greg is planning to retire after harvest number 55 and wants to make sure the next generation of Becker farms is set up for success.

“I use Aaron on the marketing and purchasing, he's very knowledgeable and I think I have some wisdom. I listen to him and he listens to me. You never forget the bad years and then you have advice to give the next generation.”

In addition to advice about investing in land and not buying shiny, new machinery, Greg’s top advice is to choose your lender wisely. “I tell everyone they should have Farm Credit as a lender.”

Looking back with a smile

A disciplined life rooted in family, love and hard work has created a farming story worth celebrating.

“The love of farming keeps you going,” Greg says. “Some days I wanted to give up. When there was no crop, there were days I thought ‘ahh piss on it’. But what would I do that never had problems, so you keep grinding and learn to live without.”

The land Greg bought back is also now home to several oil wells, which allow the family to farm without the financial stress they experienced in years past. With few holidays taken in 50 years, we asked Greg if he and Shelley would be packing their suitcases any time soon.

“We could but we won't,” he responded. “We like being by the farm. If I had to go down south in the winter I would get totally depressed. In the winter, I spend time with the old boys at the museum and listen to their stories. Everyone has a story.”