Farm transition plans get complicated in a blended family 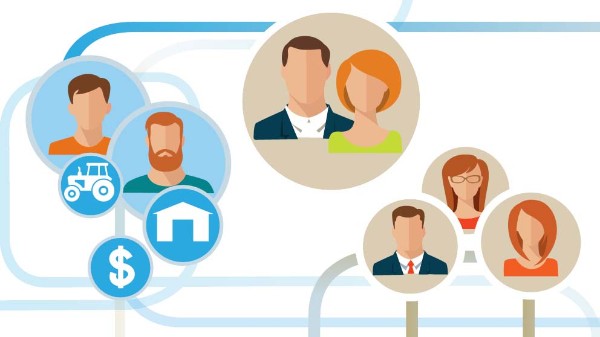 Elias and his brother Clayton always check the potato crop together after supper, and although the fields looked excellent, on this evening they were stressed and quiet. They had met with their lawyer earlier that day and heard some shocking news.

Their challenges started after the tragic death of their dad Robert and their step-mom Janice, who had passed away in a car accident the previous winter. The family structure was complicated and led to issues they didn’t foresee.

The history goes like this: Robert was a fourth-generation P.E.I. potato grower. He’d married his high school sweetheart Jessie, and sons Elias and Clayton came along soon after. Ten years in, the farm was succeeding but the marriage was failing, and the couple split up. Elias and Clayton loved the farm and spent most of their time there. Jessie moved to town and they all settled into a co-parenting routine.

Despite announcing he would never marry again, Robert met Janice on vacation in Mexico. Janice lived in B.C. so it was a long-distance relationship for a couple of years, but eventually she made the difficult decision to move across the country and marry Robert. Her kids were in college and not prepared to uproot, so they stayed with their dad in Vancouver. Having been through difficult divorces, both Robert and Janice agreed a pre-nuptial agreement made sense for all.

Elias and Clayton had stated their desire to farm from an early age and when they completed university, they returned to farm with Robert. While they only had a few growing seasons to settle into their roles when Robert and Janice passed away, the groundwork for transition had been laid.

Robert had insisted the boys accompany him and Janice to various meetings with the banker, accountant and insurance broker so they got a sense for that side of the business. The energy and passion the boys showed gave Robert confidence that it was time to let them take more responsibility for the expanding operation. They bought a neighbouring parcel of land and replaced their old potato harvester. These were big investments, but the farm needed to expand if both brothers were in it for the long haul.

Robert insisted the boys accompany him to various meetings with the banker, accountant and insurance broker so they got a sense for that side of the business.

After the accident, Elias and Clayton were faced with settling the estates. The first meeting with the family lawyer to review the wills confirmed what they understood from discussions with their dad. They were both the executors for Robert; Elias and the lawyer were the executors for Janice. The farm assets were left to the two brothers. Janice’s children were to receive her estate, which would be about $450,000.

There were some complications though. Janice had kept most of her investments in her name but had cashed some in to help Robert with the farm and harvester purchase. A promissory note documented the loan. Robert had a small life insurance policy with Elias and Clayton named as beneficiaries. Due to health issues, Janice did not have any life insurance.

It was the next lawyer meeting that had the brothers stressed as they checked their fields. Their step-siblings Brittany, Courtney and Blake, via their lawyer, were demanding settlement of Janice’s estate immediately. They also made claims that Janice had contributed financially to the farm operation over the course of the marriage and that a portion of the farm asset value would attribute to her. They challenged the life insurance beneficiary designation, questioned the validity of the pre-nuptial agreement and expressed outrage that Elias was one of Janice’s executors.

Despite their lawyer’s assurances that none of these claims would create problems, Elias and Clayton were concerned and contemplated their options regarding how they would pay out their step-siblings immediately. Robert and Janice had done everything right, yet the farm still faced a serious cash flow challenge and potential legal wrangling.

Elias and Clayton finished checking the fields and ended up sitting outside at the home farm’s picnic table to talk. They’d have to borrow money to resolve their cash flow challenges. It wasn’t going to be easy, but the foresight and planning by Robert and Janice meant Elias and Clayton would be able to keep the farm running.

Problems can arise when farmers re-marry, but there are steps that can help protect the farm business.

Tips for transitioning your farm to staff

What if there are no family members to take over the family farm?