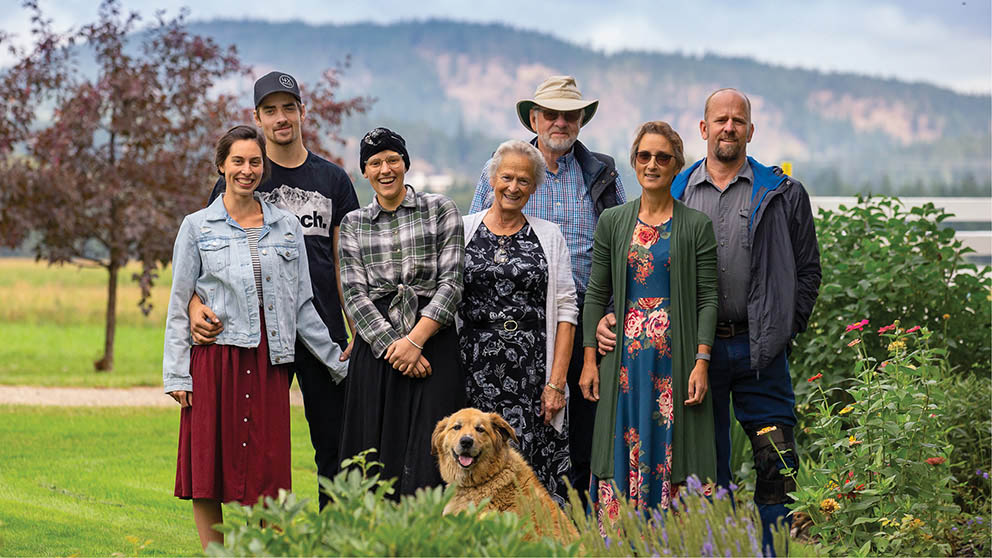 Chasing lofty goals is a way of life Rob Regehr learned growing up. It’s a mantra for business that drives the Armstrong, B.C., farmer and his family in their efforts to build a unique, highly diversified farming operation in the Okanagan Valley.

“I really enjoy setting stuff up and getting it rolling and seeing it succeed. When I get focused on something I just keep going. The word ‘quit’ isn’t in our vocabulary,” he says.

At the core of his mixed farm is Egg-Cellently Organics, a 4,200 bird, free-range organic laying operation. But Rob and his wife, Diane, have expanded well beyond eggs.

The farm the couple purchased in 1994 now includes hay and grain production, which is sold to local organic dairies, as well as alfalfa seed production. They’re also in the canola business, producing organic oil in their own crush plant. The oil is sold into U.S. markets while the canola meal is marketed through local mills directly to farms and is also used in orchards for nematode pest control.

It’s a business that taps into life experience, partnerships, hard work and a relentless pursuit of change and innovation to build a farm operation that’s bursting with ideas. It certainly makes for an interesting dinner table, admits Regehr. “We have lots of discussions. We throw around lots of ideas – some sink, some swim.”

Regehr grew up on a cow-calf and feedlot operation purchased by his parents, Doug and Elaine Regehr, in 1978 when they decided to move up from the coast and give farming a try. Rob and Diane were in their early 20s when they purchased 22 acres to start their own farm. Over the years, Rob worked in the trucking and wood industries and even spent time trading commodities. In 2011, Diane received a new entrant quota. They built a barn and started producing organic eggs.

With the goal to expand the operation and create opportunities for their children, the Regehrs saw growth in demand for organic products as a tremendous opportunity to create different income streams. In 2018, Rob drew on his experience trading commodities and brokering grains to assess the potential of a small local crush plant that specialized in organic canola oil and meal. It marketed oil to the U.S. and was a good strategic fit.

Think outside the bin to bolster product potential

Another organic business opportunity emerged after Rob consulted with some entomologist friends who highlighted an opportunity to sell organic canola meal to orchards as a pest control product. Today the plant processes up to 1,000 tonnes of canola seed a year with plans to expand capacity to 2,500 tonnes annually. There’s also potential expansion for canola meal pest control. Regehr is now working with researchers to study meal application in orchards for nematode control.

Overall, the farm has grown to 95 owned acres with 400 total acres under production, including rented land. Regehr also acknowledges supply management and the role it plays in the ability to diversify the farm. “It’s a key part of our success,” he says. “It really puts a foundation under our business. We’re working on some transactions to grow that part of the operation. It’s an important part of our long-term strategy.”

Success in niche markets also requires funding and flexibility. That’s where Regehr looks to partners like FCC, a big part of the farm team that has provided flexible funding to help build the Regehrs’ operations and sage advice on how to structure that business. “They helped put it all together and it takes a lot of dollars to make it work.” 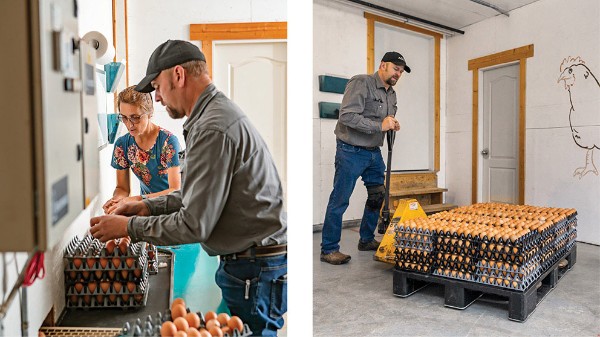 Regehr also notes the role FCC has played in helping them purchase his parents’ farm after they decided to retire and move to town. “They worked with us through the whole transaction and showed us how we could transition that farm into our operation.”

Strong partnerships with local service providers are also vital to the farm’s success and help drive its growth strategy. The Regehrs rely on custom operators to provide the bulk of their field work. “The only equipment we have is a swather and a combine,” Rob says. “Most of our farm work is custom done by a local fellow. Our funds are better plugged into buying land and finding and building businesses than buying equipment.”

The most important members of the team, however, are family. There are no full-time employees who are not related. Rob oversees the oil plant and the chicken barn. Diane runs the books for all aspects of the operation. Their son Jake manages the crops and runs harvest and the farm shop, and he and his wife Lynita live on the egg farm. Rob expects to move forward with transition plans that will see Jake take on a bigger role in running the farm in the future.

The Regehr’s youngest daughter, Tiffany, currently works at a neighbouring dairy operation and helps on the family farm with egg chores, mowing pastures and filling in where needed. Rob believes the off-farm experience will help prepare her for a bigger role on the family farm. “Without the family, it doesn't happen. Everybody's part of the team here,” he adds.

Success lies in seizing every opportunity

Assess opportunity – look at it from more than one dimension, and determine if it’s a good fit for your farm operation.

So what makes the Regehrs successful and what can other farm operators learn from them? Rob admits to being in the right place at the right time, but he does have the ability to see opportunity. “I think that's a big part of it. You need to be able to assess opportunity, look at it from more than one dimension, and determine if it’s a good fit for your farm operation.”

Regehr says the family currently has enough on its plate and is now focused on growing out its current businesses through land and quota acquisitions, while streamlining operations. But he admits he is relentless and it’s difficult to let a potential new business idea pass without digging his teeth into it.

While Rob and Diane plan to push forward with farm transition plans and slow down, it may prove difficult. Talk at the dinner table these days includes expanding acres, an egg grading plant to drive farm egg sales in the Valley and an in-house bottling plant to make their own farm-branded edible canola oil. “If the kids want to get involved, we’ll turn out dressings, mayo and whatever else we can make.”

Ambitious goals, but not impossible for Rob Regehr and his team.

Running a family farm business? Three common opinions you may want to rethink