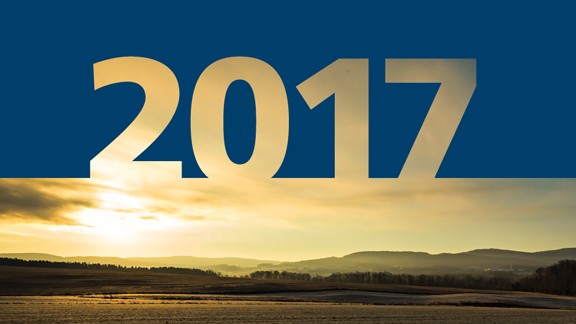 Canadian farmland values increased at an average annual rate of 8.4% in 2017. That represented a pace in the year-over-year growth of average values that picked up for the first time since 2013. 2016 had recorded an average 7.9% growth in values.

Across the country, trends varied, highlighting once again that the market for farmland is truly local. 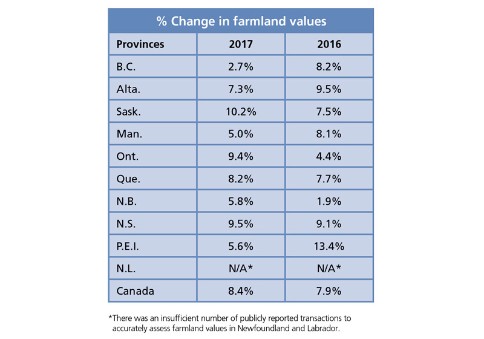 1. The decline in the rate of growth takes a breather

The growth in farmland values picked up its pace at the national level, although by a relatively minor 0.5% over the previous year. 2017 farmland values increased in every province, ranging from 2.7% (British Columbia) to 10.2% (Saskatchewan).

In fact, growth picked up significantly not only in Saskatchewan, but in Ontario and New Brunswick too. These three provinces recorded at the same time, a slight decline in crop receipts. That’s important, given the relationship between revenues and land values.

But while a higher receipts-to-values ratio in Saskatchewan for 2017 still compares favourably with its long-term average, Ontario and New Brunswick have ratios that exceed their long-term averages. Clearly, buyers in Eastern Canada expect growth in future revenues.

Mimicking the national trend of increasing farmland values, four provinces – British Columbia, Alberta, Manitoba, and Prince Edward Island – saw values grow in 2017, but they did so at slower rates than in 2016.

2. No two regions are alike

Nowhere is the importance of “local” more apparent than at the regional level of farmland sales.

Of the 51 regions reported in the FCC study, 18 regions recorded an average annual increase of at least 10%. At the other end of the spectrum, seven regions showed an annual change of less than 1%. Only the North region in New Brunswick recorded a decline (-15.6%).

Manitoba as an example

I’m highlighting Manitoba’s results here, because it serves as an example of the regional variation in the growth of values – the key feature of the market for land found in every province. 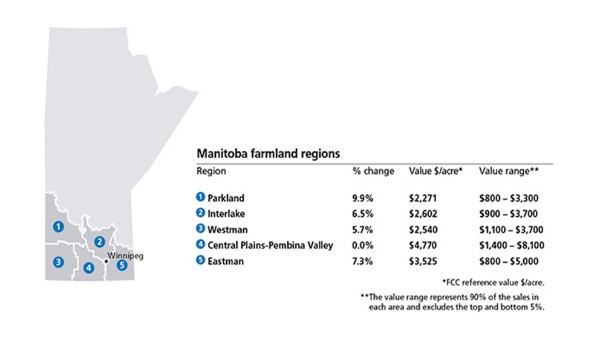 Manitoba’s Central Plains-Pembina Valley was one of the regions reporting no change in the average value of farmland in 2017. Unlike the previous year, when values saw record growth across the province, the region’s more valuable land seldom changed hands in 2017. That wasn’t the case with the Valley’s more affordable land however. In 2017, the region’s lower-priced land was in considerable demand. But while there were more sales of that farmland, the prices at which it sold had little effect on the average value.

By way of contrast, values in the Eastman region increased 7.3%. That growth was driven by expansion of livestock operations. That shift combined with expansion from Winnipeg to limit the land available for agriculture in the area.

Most provinces, including Ontario and Saskatchewan, recorded a faster pace of increase in the first six months of the year. Things slowed down in the latter half of 2017 within each province however. The Bank of Canada’s two interest rate increases (in July and September) and the higher borrowing costs they produced, muted the increase in farmland values during that period.

Additionally, periods of hot-dry conditions impacted yields across southern and central Saskatchewan. That resulted in a hit to revenues in the 2017-18 marketing year, a decline that tends to show up in slowing growth in farmland values. But with most land sales occurring in the first half of the year, any impact that the dry weather may have had on land prices is yet to be seen.

With farmland values likely to continue to climb in 2018, we expect the year will also bring more volatile commodity prices and slightly higher interest rates. I believe both the recent increases in borrowing costs, and any further increases in rates, will cool the farmland market in 2018.

Now is the right time for producers to adjust business plans to reflect those pressures and assess their overall financial positions. Increasing productivity will be key in managing the changed economic landscape.

For the full story including the report, interactive map, webinar and big picture analysis, check out the 2017 farmland values page.