Someone is drowning in grain – what do you do? 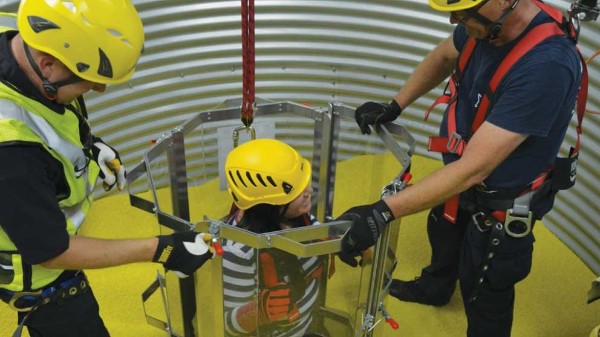 Seven people died in grain bin entrapments across Canada in 2015, including four children. But the death toll could easily have been higher.

In February 2015, a 20-year-old Nova Scotia man was trying to clear an auger while moving grain from one bin to another when he suddenly sank to his waist.

Lucky for him, he was able to reach his cell phone and call two co-workers for help. They got a rope around the sinking man, tied it off and called 911.

“Time is critical,” says Glen Blahey, a health and safety specialist with the Winnipeg-based Canadian Agricultural Safety Association (CASA). “There’s not much anyone can do to resist the suction of flowing grain once they’re caught in it.”

Funded by farming groups such as Manitoba Canola Growers Association, SaskCanola and Alberta Canola Producers Commission, the new $150,000 unit features a grain bin with safety decking at the top that permits producers and responders to see what actions are required to rescue an entrapped mannequin.

What you need to do

Blahey says entrapments occur when people fail to follow safe-practice procedures. Dangers include walking on the surface of grain without wearing a safety harness attached to a retrieval line, and turning on an auger when someone is inside a bin.

When an entrapment occurs, Blahey says the critical first thing is to shut off the flow of grain and then call 911.

Blahey cautions against rushing into a bin to try and rescue someone. “Like with a trench collapse or a drowning, going in without first assessing the situation only creates the potential for additional fatalities.”

He also warns against actions like quickly cutting holes in the side of bins without an assessment of the grain level, condition of the victim and structural integrity of the bin. “Done incorrectly, the grain just piles up and the flow stops after dragging the trapped person down even deeper.” It also creates a risk of bin collapse.

Trying to pull an entrapped person out is very difficult. “At first it seems simple, but it takes over 600 pounds of force to pull someone out who is buried up to their waist, and 900 pounds if it’s over their head. You’re not going to do it without the right equipment and know-how.”

Fortunately, one of the fire department crews responding to that 911 entrapment call in Nova Scotia did have the right equipment, and was trained in grain rescues. They surrounded the young man, by then buried up to his chin, with a specialized cofferdam that allowed the grain to be vacuumed out from around him. Then they safely extracted him from inside the cofferdam.

He walked away – sore, but alive – from his ordeal.

From a AgriSuccess article by Mark Cardwell