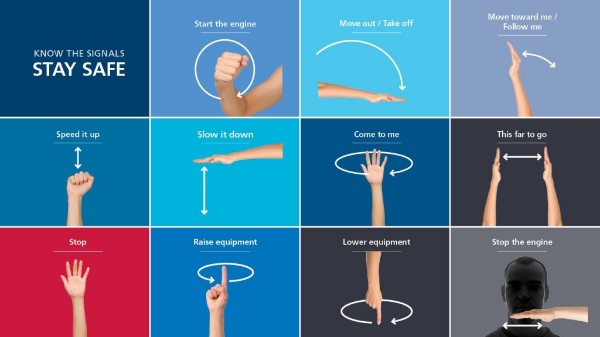 There’s no mistaking the meaning of an uplifted middle finger in Western culture. Glen Blahey hopes the same will be true one day for 11 standardized hand signals on farms across Canada.

“They’re not yet being used universally,” says Blahey, a veteran health and safety expert with the Winnipeg-based Canadian Agricultural Safety Association (CASA). “But they are becoming increasingly common.”

Derived from signals used in the construction and crane industries, the 11 hand signals were developed decades ago by the American Society of Agricultural and Biological Engineers(ASABE) to enhance both communication and safety on farms and ranches. Most of the signals are based on common-sense gestures regarding distance, direction and speed.

Hand signs are a vital tool in working environments like farms, where distance and noise can – and sometimes do – make verbal communication impossible.

According to Blahey, hand signs are a vital tool in working environments like farms, where distance and noise can – and sometimes do – make verbal communication impossible.

“It’s the same as with rude gestures,” he says. “You want to make sure the meaning is clear to everyone involved.”

That was hardly the case when Blahey started out as a farm-safety specialist with the Manitoba government in 1981. Since then, however, he’s seen the use of standardized hand signals become a mainstay feature and a universal language across much of Canada’s farming landscape.

Standardized hand signals, he adds, is also helping make agriculture safer for workers who change farms. Blahey credits their growing use to the efforts of both provincial and national farm groups and associations like CASA, who work to raise awareness of farm safety issues.

Spread safety on your farm

Several groups offer free posters and other printed materials, and some farm equipment manufacturers now include them in owner’s manuals.

Blahey recommends putting up posters or printouts of hand signals in prominent places, where they will be seen daily by farm workers and visitors such as feed-truck drivers and chemical company representatives.

He also urges farmers to train and test their family members and farm workers to ensure they know and understand each of the signals.

“There can’t be any ifs, ands or buts when it comes to using them,” Blahey says. “Ambiguity or confusion around farm machinery can be deadly.”

From an AgriSuccess article (Sept/Oct 2015) by Mark Cardwell.