Growing success with a niche crop 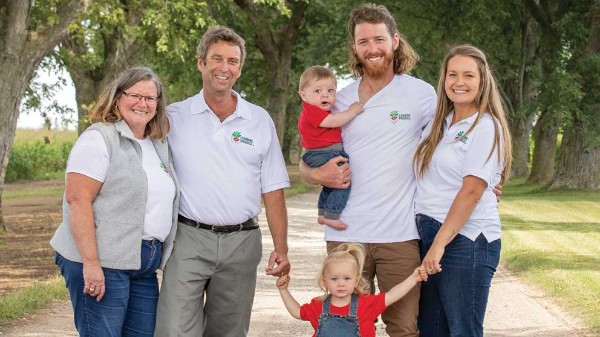 When Bob and Mary Jane Davis planted their first crop of leeks in 1988, they had no idea where the “green onion on steroids” would take them.

It’s the story of a measured, strategic approach that has allowed the Davis family to serve a niche for a single vegetable with relatively flat market demand. Throughout their journey, Bob and Mary Jane have employed their entire family. A love for number crunching, innovation, customer service and a commitment to quality makes growing, packaging and marketing the onion-like vegetable a successful farm business.

Bob and Mary Jane took over the farming operation from Bob’s parents in 1984 when the primary crop was sweet corn, and purchased the farm from them in 1998. The idea of growing leeks emerged when a local grower retired, giving the couple an opportunity to take over a small production contract with a local wholesaler. “In the beginning we started the leek harvest after the sweet corn harvest in late September. Harvest would last one week and everything would be done by hand,” Bob recalls. They already had a cooler for sweet corn so leeks were a good fit for their operation.

You have to be aware of what you’re doing – where the money’s going, inputs, expected costs and expected revenue. Without that you’re flying blindly."

They quickly set their minds to expansion, but there wasn’t much room to manoeuvre. Leeks are a very small crop and they were wary of flooding the market or muscling in on other growers who typically supplied the wholesaler market from mid-August through mid-October. After local leeks had worked their way through retail, the grocery stores relied on supply from the U.S. and Mexico until the next Ontario harvest.

The Davises determined the best way to grow was to eliminate imports by strategically extending the availability of Ontario product. That’s when Bob hatched the idea of two harvests. They would build a greenhouse to start leeks under glass and produce an early harvest beginning mid-July. This would let them supply the market for a full month before other local growers had crop available. A second harvest was planned for October, after other growers had sold their crop. This would allow the Davises to supply the market through the remainder of the calendar year.

“Leeks are a very small market. We just can’t plant an extra 100 acres. It’s not like corn; we wouldn’t have anywhere to sell it,” Bob says. “We don’t put any leeks in the ground that we don’t have a market for.”

The business continued to grow through the 1990s as the Davis family displaced more imports with their local leeks. To increase production, Bob knew he had to add mechanization to increase efficiency for the high-management crop. In 1990, the farm doubled leek production, powered in part by a used peanut harvester that Bob dismantled and rebuilt as a leek harvester. They also built their first wash line.

This commitment to innovation has continued for three decades as the Davises regularly travel to Europe to visit leek farms and gather growing, harvesting and processing know-how. The challenge of storing leeks for extended time periods, however, was one they had to tackle themselves.

Learning cold storage required significant trial and error, but the Davises soldiered on. In 2001, a new pack house and cold storage facility was built and sweet corn production ceased. The following year the farm was incorporated and Canning Produce Inc. was born.

Throughout their journey, Bob and Mary Jane have maintained a sharp pencil to remain profitable while taking a measured and sustainable approach to growing their leek business. “It's not like cash cropping where you put it into the ground and take it off in the fall. We're in the crop every single day once it goes in the ground, managing it, looking at it, seeing what it needs,” Bob notes. 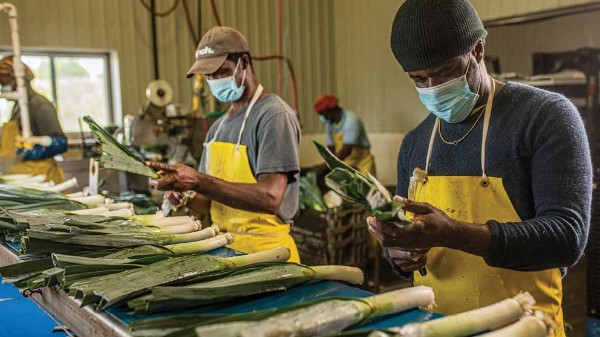 In 2007, Canning Produce switched to offshore workers to meet the farm’s growing labour requirements. Ten Jamaican migrant workers now join the farm each summer to get the job done.

With few chemical control options, weed control is done primarily by hand and the hungry green, stalky vegetable can require up to five fertilizer applications. An intensive management approach is also driven by a dense crop population to optimize all inputs, including fuel, machinery, fertilizer, labour and chemicals.

“It’s a very expensive crop to grow, maintain and look after all summer long and then it has to go into cold storage. That’s why we don’t plant any leeks that are not basically pre-sold,” Bob says. “We have a history with the chain stores, and we know what to expect with them.”

Chain stores also know what to expect from Canning Produce. “Our goal is to supply the Canadian market for as much of the year as possible so that the Canadian consumer can have a safe and local leek supply,” Bob says.

With a strong focus on customer service, Canning Produce delivers on that promise in part thanks to CanadaGAP® certification to ensure food safety and traceability across all vegetable production practices. “We've been certified here for about eight years now, and ever since we started, we elected to be audited every year. We only need to be audited once every four years, but we want to stay on top of things and keep a good safe product going into the stores,” Bob explains.

Bob and Mary Jane are also proud of the role the entire family has played in the success of the operation. Mary Jane notes that her job has changed as the business has evolved, especially since the arrival of offshore labourers. “When they arrived, I got out of the field. I enjoy doing all the office work now.”

The  four Davis children have worked on the farm all their lives. Their career paths have taken them away from the farm, but they each still play a role. Brad, the oldest, manages information technology at a major insurance firm in Waterloo, Ont. “He helps whenever we need an extra hand, especially in the fall driving the harvester, and his wife Chantal drives the delivery truck part time,” Bob says.

Stephanie is a partner at a Waterloo accounting firm and acts as one of the farm’s financial advisors as well as the accountant. Jeremy is a special constable with the Ontario Provincial Police tactical unit at Queen’s Park and helps on the farm whenever he’s needed. Corey, the youngest son, completed a university degree in chemistry before returning to the farm full time in 2012.

Corey is now the farm manager and Emily, his wife, is learning the many office procedures. The family is in the early stages of succession planning that would see Corey and Emily take over the farming operation in the years ahead.

Know your costs – and your market

When other farmers ask about the keys to Canning Produce’s success, Bob is quick to point to the importance of business acumen. A lover of spreadsheets, he says it’s critical to know your costs: “You have to be aware of what you’re doing — where the money’s going, inputs, expected costs and expected revenue. Without that you’re flying blindly. No company does that and stays in business for very long.”

Knowing your market is also key. The Davises’ understanding of the Canadian leek market, specifically supply and demand and retailer needs, has allowed them to take a measured and sustainable approach to growing their business and servicing a relatively narrow niche market.

Bob and Mary Jane are also big believers in keeping family involved in the operation — it’s not always easy to accomplish but it is very rewarding.

It’s also important to enjoy what you’re doing. “You have to want to produce the best products you can,” Bob says. “I love growing leeks, I love growing the plants in the greenhouse, I love planting them out in the field, and I love the beginning of harvest… And I enjoy driving the delivery truck when I can. I still do that.”

Resources to help maximize your business profitability and potential.

Resources to set you up for success in every stage of farm transition.

Know your cost of production for better decision making

Cost of production analysis can be useful for both big and small farm management decisions. And it all starts with good farm record keeping.