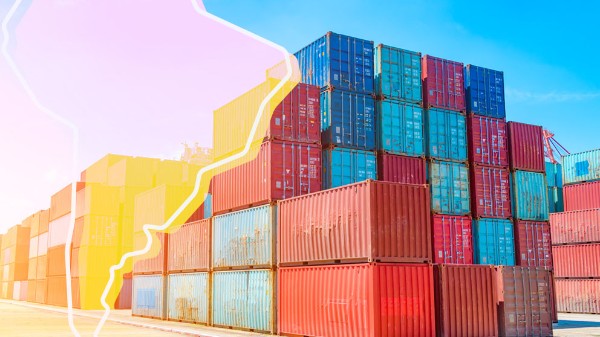 In this Q3 trade update, we’re spotlighting a region composed of some of North America’s biggest competitors. Within South America, Argentina and Brazil are two of the world’s largest producers and exporters of agricultural commodities that are of central importance to Canadian export performance. Neighbours Uruguay and Paraguay are also significant traders of select goods. Of 2021 global agri-food exports, the four shipped 58% of all soybeans, 35.6% of total frozen beef, and 12.3% of total wheat. Argentina, Brazil, Chile and Paraguay combined to account for just over one-quarter of maize exports.

Brazil has been a clear winner of the growth in global demand for food and feed over the last decade. Major recessions with extended periods of depreciation for Brazil’s currency (the real) have also boosted the influence of productivity gains, realized via the adoption of new crop varieties and livestock breeding techniques, policy enhancements and high commodity prices in developing a huge export market of more than 220 countries. The world’s fifth-largest country (in land and population) has become a top-5 producer of 34 commodities and is the largest net exporter in the world.

Brazil supplies more than half of the world’s soybean exports, with 70% of its exports allocated to China alone in 2021. The two countries are heavily interdependent in ag and food trade. China accounted for roughly 4 in 10 of Brazil’s total agricultural exports, a volume likely to grow in the near term with a trade agreement signed in May 2022 for China to import Brazilian corn as of December. Brazil’s safrinha corn crop, now big enough to add to the list of South American commodities impacting world prices, will propel the country into the second-largest corn exporter over the next 10 years. Their soy exports already exert a strong influence on world soybean prices, influencing production decisions and prices for corn and other oilseeds, including canola.

While Argentina is a world leader in soy, wheat and red meat markets, Argentinian ag has been hampered by the widespread use of export taxes which limit exports. Despite the development of a huge domestic soybean crushing industry in response to the taxes, earlier this year, soy producers were “hoarding” supplies that face depressed domestic prices and few good options to sell elsewhere, a development that’s hindered the cash-strapped Argentinian government.

2022-23 MY to be a good year for Brazil’s profitability; Argentina may struggle

Conab, Brazil’s cited statistics company, expects the country’s 2021-22 marketing year (MY) revenues to be strong. The country’s currency (real) has depreciated vis-à-vis the U.S. dollar, giving Brazilian producers a competitive revenue boost (it has generally appreciated relative to Canada since March 2022). Conab is forecasting a record 2022/2023 grain season that would top the record set last season, including a 21.2% year-over-year (YoY) increase in total soybean bushels and a 9.4% YoY increase in total corn bushels. Brazilian crop margins are expected to remain strong throughout the MY.

South American growth in world trade over the last decade comes partly from the ability to double or even triple crop. Brazil’s first corn crop is harvested between January and April. The second harvest, “the safrinha” (corn planted in fields to follow soybeans), occurs in May-August, and as of 2018-19 MY, a very small third harvest occurs between September to December.

Pressuring margins, Argentina has faced much poorer weather for their 22-23 wheat harvest, with a 39% YoY drop in expected production due to ongoing drought conditions and early frost. The USDA October WASDE had pegged its production to 17.5 million metric tons (MMT), and the November WASDE reduced it to 15.5 MMT, but now in late November, it’s been reduced further to 13.4 MMT. That said, the decline won’t be enough to drop global supplies as increased production in Australia and elsewhere offsets declines in Argentina and the EU.

Also, on the downside, price increases in fertilizer, fuel and feed have taken a toll in South America as they have here. Brazil is the world’s fourth-largest fertilizer importer, and with infamously poor infrastructure (port capacity, roads, rail and storage), the cost of those imports is even more burdensome on producers. These factors will challenge profitability in both crop and livestock production. Reduced access to fertilizer for Brazil may mean they cut back on acres planted in 2023, with the added possibility of falling yields further limiting their upcoming production.

Continued strong demand for soybeans, meat and feed grains will support South American margins. Expected production to 2031-32 solidifies South America’s presence as a global supplier. The four founding members of MERCOSUR (Brazil, Argentina, Uruguay and Paraguay), a trade bloc with aspirations of developing a common market like the European Union, don’t yet have big free trade agreements. Working on a deal with the EU, they’ve successfully built excellent trade relationships with some of the world’s biggest importers of ag and food and, most notably, with China and much of Asia. That’s worked to their advantage in 2022, a year marked by reduced production and trade from the Baltic Sea region due to the war in Ukraine.

Of course, as the world’s largest importer of many agricultural commodities, including wheat, maize, soybeans, beef and pork, China is a market all exporters focus on. But they’re increasingly counting on South American suppliers to meet demand, especially in meat markets. In 2021, South American exporters filled 22% of total Chinese pork imports and 63% of their total beef imports. That had grown from 13% of total pork imports and 38% of total beef imports five years earlier. By comparison, Canada’s exports accounted for 3% of Chinese beef imports in 2017 and 5% in 2021. Regarding growth trends, pork provides a good contrast between the two countries.

Currently, Canada exports more pork to the world than Brazil. In 2021, we shipped US$3.2 billion worth of pork worldwide, compared to Brazil’s exports of US$2.5 billion. The two countries’ exports to China in 2017 were virtually identical (US$326 million for Canada and US$321 million for Brazil) (Figure 1). 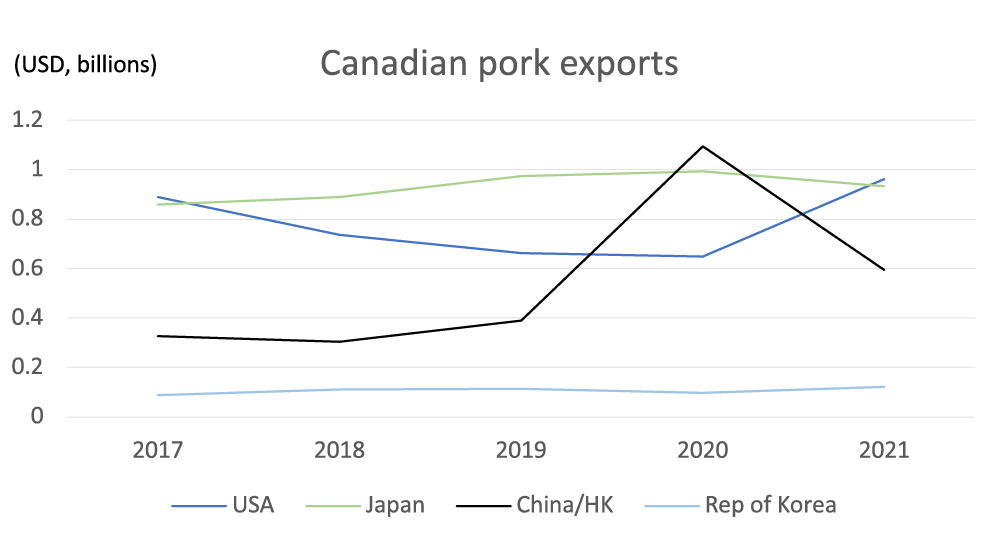 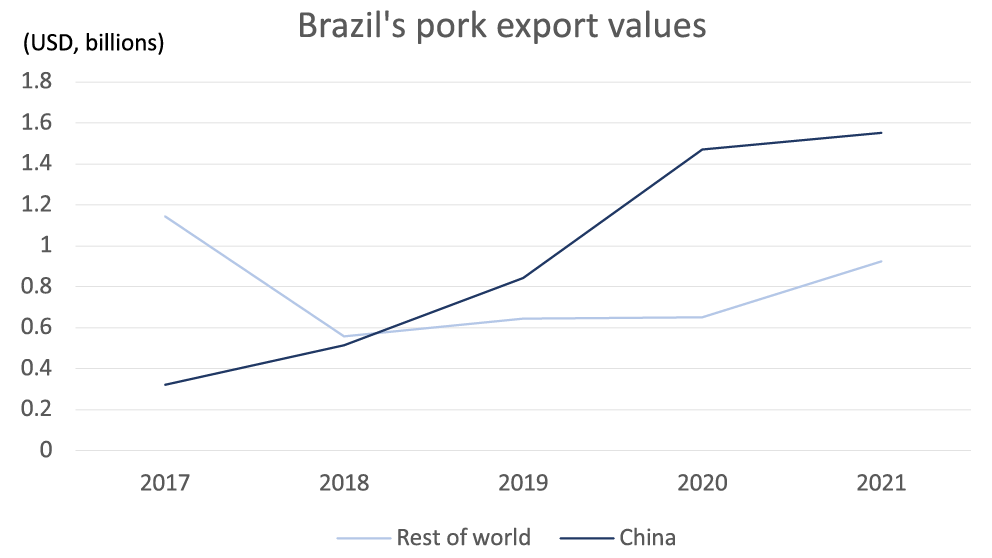 Over the last five years, however, Canada was able to increase pork shipments to China in direct response to African Swine Fever (ASF) in the Chinese pig/hog herd and, as of 2020, is retreating to levels more aligned to the previous five-year average. Brazilian exports also grew in response to ASF, but they’ve continued growing, albeit at a slower rate since 2020 than in 2017 - 2019. It appears that Canada provided a stop-gap measure at a time of incredible demand and that China has stuck with Brazil as a choice pork exporter.

Opportunities for Canada ahead?

The volatile global fertilizer market faced by Brazilian farmers may result in several opportunities for Canadian crop producers and possibly for the Canadian livestock/meat industry. According to the USDA, Brazil's livestock producers may be impacted by a slowed production of feed grains. That might mean they ration feed grains - culling cattle and reducing their herds this year rather than feeding them expensive grains. That has implications for global meat supplies.

Another potential opportunity exists in red meat. While Chinese import growth of South American beef has tapered off since 2020, Canadian export growth to China has climbed 35% past the COVID-related slowdown in global beef trade. South American exporters still easily surpass Canadian exporters in value, but with the noted growth in Chinese household income has come an acquired taste for beef and the possibility of future growth for Canada.

South American ag and food producers have exploited the chance to develop diverse and growing export markets within a trade environment of strong demand. As direct competitors to North American producers, they increasingly influence the prices that Canadian producers receive. Brazil and Argentina warrant monitoring as their record-setting growth in the production of different crops can be a reason prices drop. But the reverse is also true: any cuts in their production levels, for weather or cost reasons, may spell opportunity for Canada.