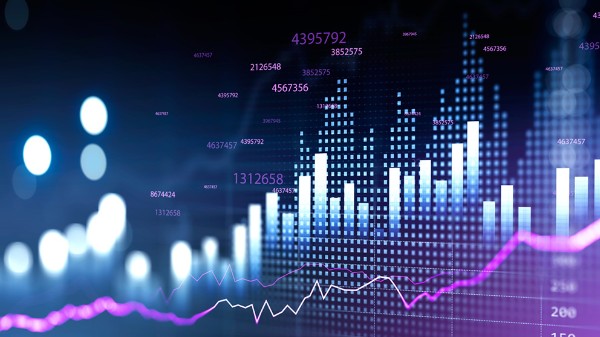 The Bank of Canada (BoC) has aggressively increased its policy rate to combat inflation. While effective, Canadians are quickly realizing that inflation and its remedy are challenging their purchasing power. Higher rates have slowed business investment growth and lowered credit availability for consumers. The good news is that we appear to be at or near the end of the current BoC tightening cycle, as inflation will decline in 2023. However, the Canadian economy will slow down to the extent that it is likely to enter a mild technical recession as credit markets tighten and rates remain elevated.

The Canadian economy showed signs of weakness in Q3, with GDP growth slowing quarter-over-quarter (Figure 1).  Exports remained strong in the quarter, however household consumption and business investment growth declined. GDP growth is expected to decline further into 2023. Annual GDP growth for 2023 is projected to be 0.5%, with two consecutive quarters recording a small decline. Forecasts for the U.S. are similar, with 2023 growth projected at 0.2%.

The magnitude of the downturn remains a major question. The labour and commodity markets are historically tight, both positive drivers of growth. The credit market and consumer position are cause for concern, although spending remains resilient. Higher interest rates will continue to lower demand, and the BoC has been clear that it is comfortable sacrificing some growth to lower inflation.

Figure 1. GDP growth is projected to slow in early 2023 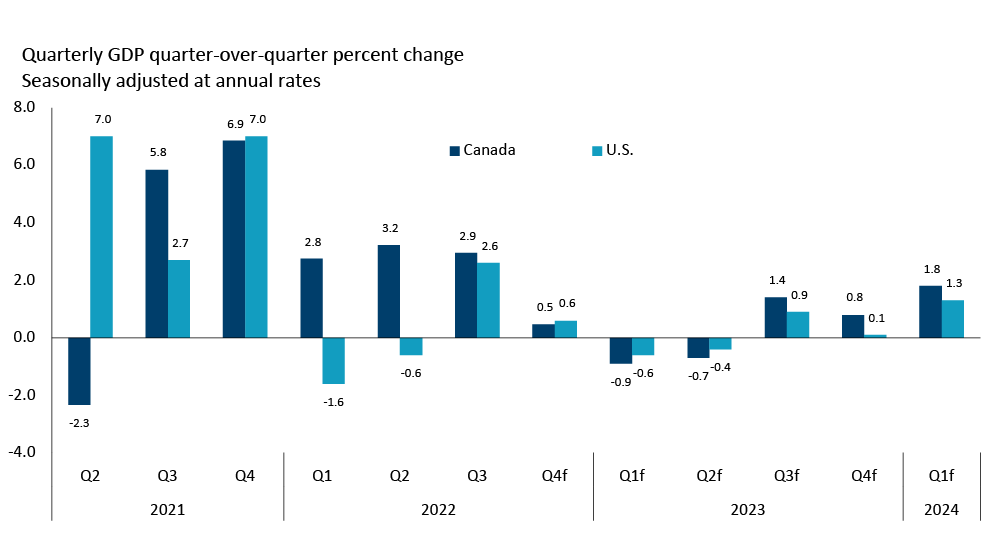 On December 7, the BoC increased its overnight rate to 4.25% from 3.75%, bringing it within what is considered a restrictive territory. FCC Economics expects the BoC to shift greater attention to decreasing its assets. In the meantime, we anticipate the BoC will keep its policy rate at 4.25% and evaluate how the economy and inflation react before considering its next move (Table 1). Any further upward or sideways movement in inflation could be met by further rate increases.

Table 1. BoC policy rate is expected to top-out in early 2023

Headline inflation was 6.9% year-over-year in October, down from the Q3 average of 7.2%. Food inflation has been a major contributor, and it fell slightly in October to 10.1% from 10.3% in September, still far from a rate considered acceptable to most Canadians. Agricultural commodity prices have fallen from their highs of early 2022, but FCC Economics’ latest forecasts are for prices to remain historically strong into 2023. Nonetheless, we see food inflation easing in 2023 as North American grain and oilseed supplies rebound. The energy markets remain susceptible to major short-term swings. A lower Canadian dollar exchange rate versus the U.S. dollar will likely raise import prices. Higher wages also continue to be an issue in the tight labour market. Overall, we anticipate headline inflation will decline towards 3% at the end of 2023. Core inflation is expected to remain high, which should lead the BoC to keep its policy rate elevated.

Table 2. Headline inflation is forecasted to decline further in 2023

The U.S. Federal Reserve (Fed) has been similarly aggressive in increasing its policy rate. We expect it will increase rates a further full percentage point yet keep an accommodative stance towards its balance sheet. Since its 2021 peak, BoC’s total assets are down 28%, while the Fed’s are down 4%. Both asset values remain historically elevated, and while the two central banks will not hesitate to provide further liquidity if needed, they remain committed in the long run to reduce assets.

Short-term bond yields have increased faster than their long-term counterparts since June when the probability of a recession started to mount in response to the BoC’s actions. Investors prefer to put money in long-term bonds during economic uncertainty as they historically have lower price volatility relative to other assets, suppressing yields. This combination has resulted in an inverted yield curve (short-term bonds having a higher return than longer-term bonds), which is at a degree, not seen in the past 30 years (Figure 2). Investors have been able to get nearly 100bp higher return on 2-year bonds versus the 10-year.

An inverted yield curve is often a precursor for an economic downturn but does not necessarily mean a recession is imminent. For example, in 2000, the curve went negative, but Canada did not fall into a recession. However, the degree to which the curve is negative is concerning.

Figure 2. Yield curve inversion at the highest point in 30 years 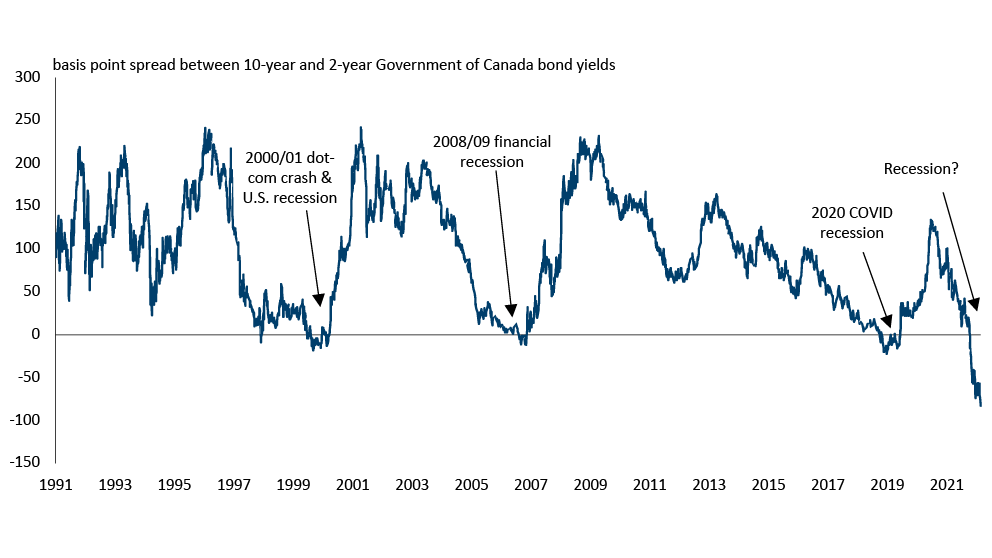 Heading into 2023, we expect long-term rates to increase while short-term rates ease. Both rates are expected to remain elevated throughout 2023.

The CAD weakened in September and October as the USD rallied, and the BoC suggested less aggressive future rate hikes. More recently, the USD has decreased in value as U.S. inflation eased, the economic outlook has weakened, and the expectation of future rate hikes cooled in response. We expect the CAD to hover in the low 70c range over the next year as weaker growth for the Canadian economy and lower oil prices will outweigh any weakness from the U.S. (Table 4).

The European Central Bank (ECB) raised its deposit rate from 0.75% to 1.50% in October, the highest level in over a decade. The deposit rate is expected to increase a further 0.50-0.75% on December 15th. Inflation in the Eurozone continued to increase, rising to 10.6% YoY from 9.9% in September. A more aggressive ECB and lower inflation expectations as natural gas prices fall have resulted in the CAD parring some of its gains YTD. We expect the loonie to remain strong relative to the Euro but fall slightly in 2023 versus the 2022 average.

Table 4. CAD is projected to see further decline against the USD

FCC attempts to provide accurate and useful information and analysis. The contents herein have been compiled or derived from sources believed to be reliable, however, FCC cannot guarantee the accuracy of the information contained in this report. All estimates and opinions within this report constitute judgments as of the date of this report and are subject to change without notice. FCC makes no representation or warranty, express, or implied, in respect to this report, and takes no responsibility for any errors or omissions which may be contained herein. FCC accepts no liability whatsoever for any loss arising from any action or decisions taken by any reader of this report based on information provided in this report.