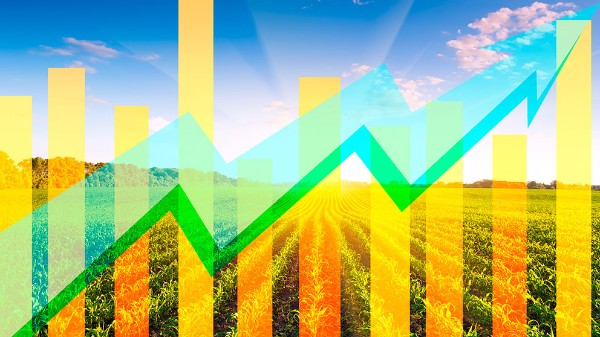 Canadian economic growth is expected to weaken in Q3. Elevated inflation is challenging the spending power of many consumers, while higher interest rates are expected to slow investments. A bright spot continues to be exports, although lower commodity prices and declining global economic growth could be headwinds. The Bank of Canada (BoC) continues to aggressively increase its policy rate to combat inflation. The BoC raised its overnight policy rate from 2.50% to 3.25% on Sept. 7. We anticipate the overnight rate to finish the year at 3.75%, although we would not be surprised to see it go higher. Expectations in 2023 and beyond become cloudier.

Canadian GDP growth for Q2 was healthy (Figure 1), led by higher commodity exports and strong consumer spending. Continued supply-chain disruptions and elevated job vacancies likely hindered some growth. Compared to the U.S., which has now had two consecutive quarters of negative GDP growth, Canada appears to be in a good position. While GDP is currently forecasted to be positive in the near-term, Canada is exposed to a future contraction in GDP. Business bankruptcies and proposals were up 31% YoY in Q2 and economic weakness in the U.S., China and Europe could have spillover effects on the Canadian economy.

Figure 1. GDP growth is expected to substantially slow down into 2023 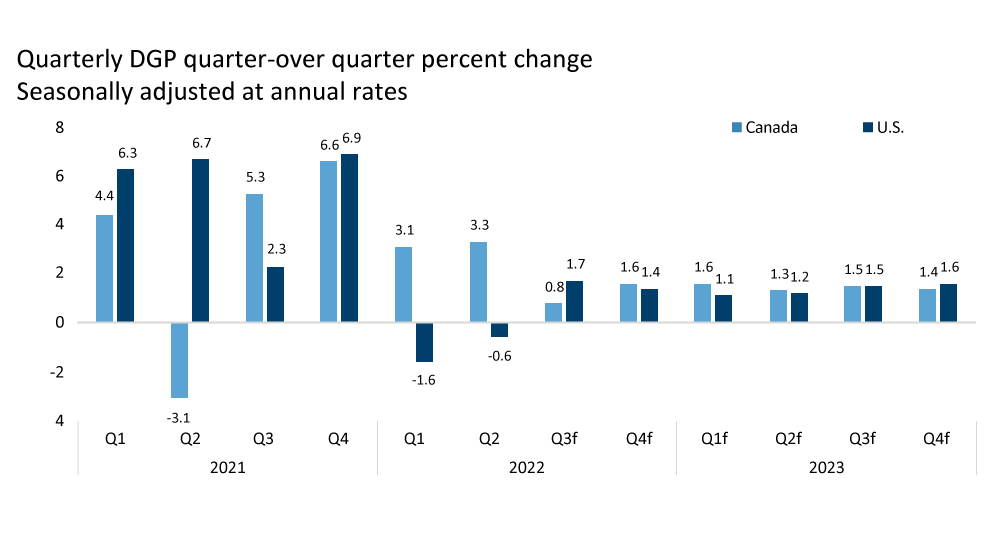 Where is consumer spending growth coming from?

While inflation is taking a bite out of many Canadians’ purchasing power, most recent demographic data shows that those aged 65 and over are increasing the pace of their spending. Since Q3 last year when inflation eclipsed 4%, those aged 65 and over are the only age group to increase their proportion of total consumption (Figure 2). As people retire, which Canada has seen much of in 2022, their savings rate becomes negative and they become net spenders, pushing total consumption higher. 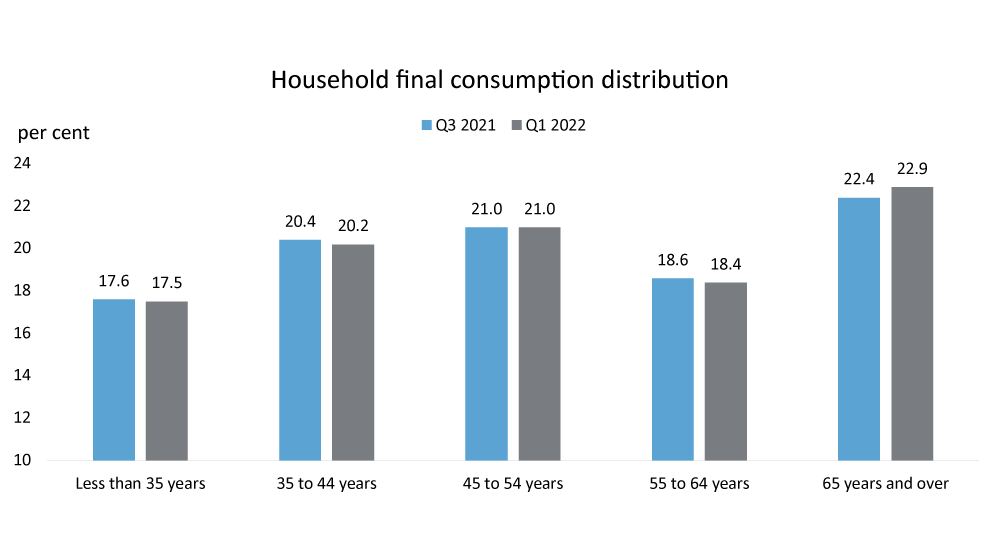 The Bank of Canada overnight rate and inflation

On Sept. 7, the BoC increased its overnight rate to 3.25% from 2.50%. The BoC has been aggressive in increasing rates to lower inflation. FCC Economics anticipates the BoC will end the year with its rate at 3.75%, although it could go higher if high inflation persists (Table 1).

Table 2. Headline inflation is forecasted to remain elevated into 2023

The market consensus, including FCC Economics, is for policy rates to be lowered in 2023 due to a weaker economy. Several unknowns remain at this point for predicting longer-term rates and inflation, especially into 2024.

Higher policy rates will lower inflation, but whether it falls to the 2-3% range depends on commodity prices and how long the BoC keeps its rate elevated in the face of a potential economic slowdown. The sooner the BoC steps off the pedal, the higher the risk of inflation remaining elevated, and we could see a second tightening cycle into 2024. We remain optimistic the BoC will orchestrate a soft-landing for the Canadian economy.

The U.S. Federal Reserve (Fed) has been similarly aggressive in increasing its policy rate. However, the Fed has been far less aggressive in reducing their balance sheet. The BoC has decreased its assets by 24% since its 2021 peak, and as the economy has grown, assets as a per cent of GDP have fallen 10% (Figure 3). In contrast, the Fed has decreased its balance sheet by only 1%, putting the BoC in arguably a better position to handle future economic struggles.

Figure 3. The Bank of Canada has been more aggressive than the Federal Reserve with asset 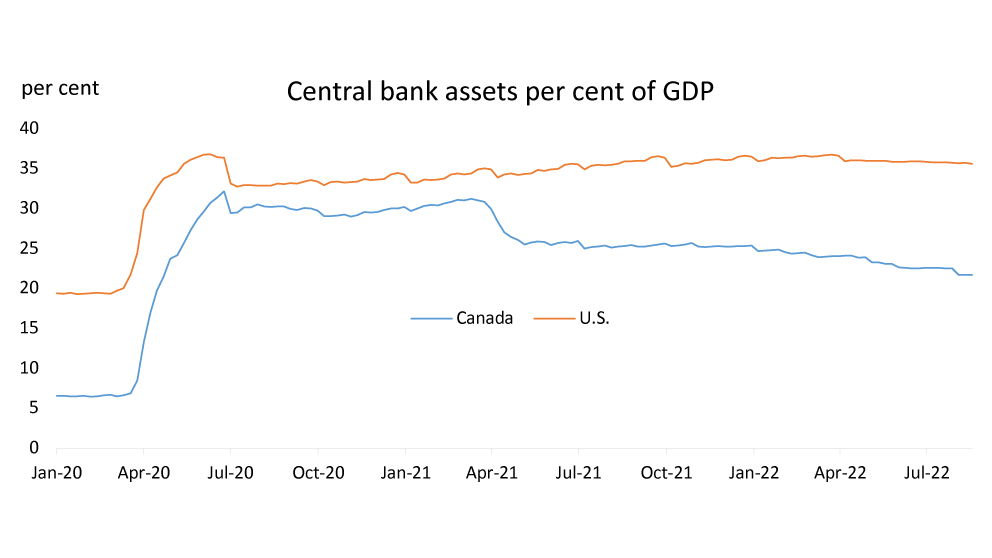 Longer-term government bond yields have retreated as concerns over long-term growth have increased. This decline, along with higher short-term rates led by the BoC policy rate hikes, has inverted the yield curve slightly. Yields on long-term bonds are expected to rise in 2023 once the prospects of economic growth gain steam (Table 3).

Table 3. The long end of yield curve expected to increase in 2023

The CAD held up well over the summer, as the BoC ended up being more aggressive than the Federal Reserve on increasing its policy rate and the price of oil remained above $100 into August. There has also been weakness in the USD, with the American economy recording two consecutive quarters of negative GDP growth. We do expect weaker growth for the Canadian economy, and lower oil prices will likely lower the value of the CAD. We expect the value of CAD per USD to decline into 2023 (Table 4).

The European Central Bank raised its deposit rate from -0.50% to 0.00% in July. This was the first increase in 11 years. A further 50bp increase is expected this fall. The Eurozone is dealing with a substantial amount of uncertainty, primarily regarding near-term energy supplies. This uncertainty has helped weaken the EUR; however, we are anticipating Eurozone inflation to be lower in 2023, which should benefit the EUR. To say the least, the war or a failure to secure energy outside of Russia could threaten the European economy and its currency.

Table 4. CAD projected to decline against USD into 2023

FCC attempts to provide accurate and useful information and analysis. The contents herein have been compiled or derived from sources believed to be reliable, however, FCC cannot guarantee the accuracy of the information contained in this report. All estimates and opinions within this report constitute judgments as of the date of this report and are subject to change without notice. FCC makes no representation or warranty, express, or implied, in respect to this report, and takes no responsibility for any errors or omissions which may be contained herein. FCC accepts no liability whatsoever for any loss arising from any action or decisions taken by any reader of this report based on information provided in this report.