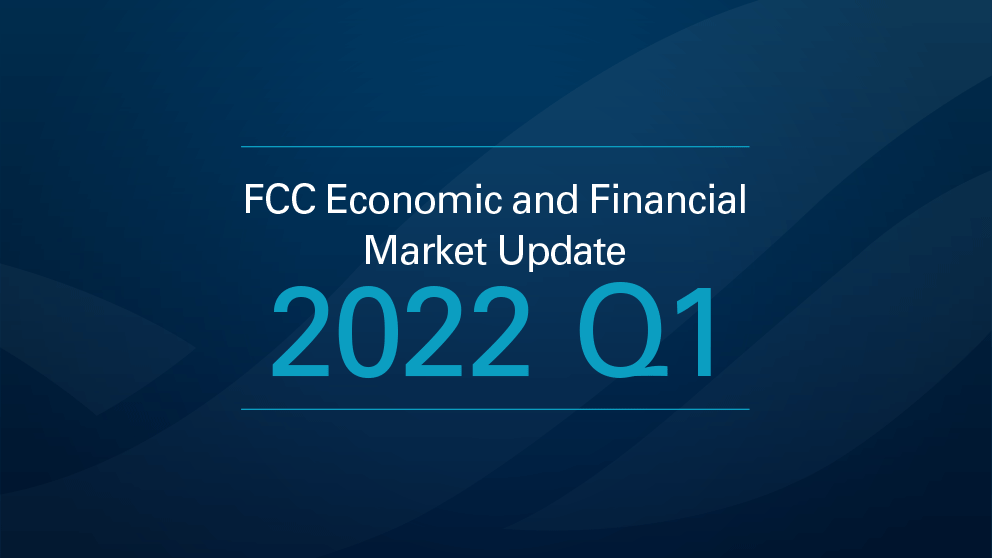 Canada’s economic growth is expected to be weaker in Q1 from Omicron and supply chain disruptions, compared to the second half of 2021. FCC Economics expects to see a strong rebound in Q2 and strong overall growth in 2022 as the demand for services increases with the re-opening of provincial economies. Challenges related to a tight labour market and supply chain bottlenecks are offset by strong exports and consumer spending. The Russian invasion of Ukraine will weaken global economic growth and contribute to further supply chain disruptions and higher energy prices. Inflation rose to decade highs in Q4 2021, and the Bank of Canada (BoC) is adamant about increasing its policy rate to combat inflation as the labour market indicators have mostly recovered to pre-COVID levels. The first increase in the overnight rate came on March 2, and FCC Economics expects the BoC to increase the overnight rate an additional 4 times by year-end.

GDP was strong in Q4, growing at an annual rate of 6.7% over Q3. Consumer spending was robust as unemployment returned to pre-pandemic levels in December, and the labour force participation rate for individuals aged 25-54 was the highest on record at 88.4%. Higher oil, lumber and ag commodity prices and growing foreign demand supported exports.

GDP growth is expected to slow in Q1 (Figure 1). Omicron has slowed spending and employment, primarily in food services, accommodations, and travel. In January, absenteeism at work was up 32% YoY, limiting productivity and disrupting transportation. GDP growth should pick up steam in Q2 as COVID restrictions lessen before moderating to 2-3% levels heading into 2023. The annual gain in 2022 is projected to be 3.8%, down from 4.6% in 2021.

Figure 1. GDP growth is expected to be modest in Q1 before hitting its 2022 peak in Q2 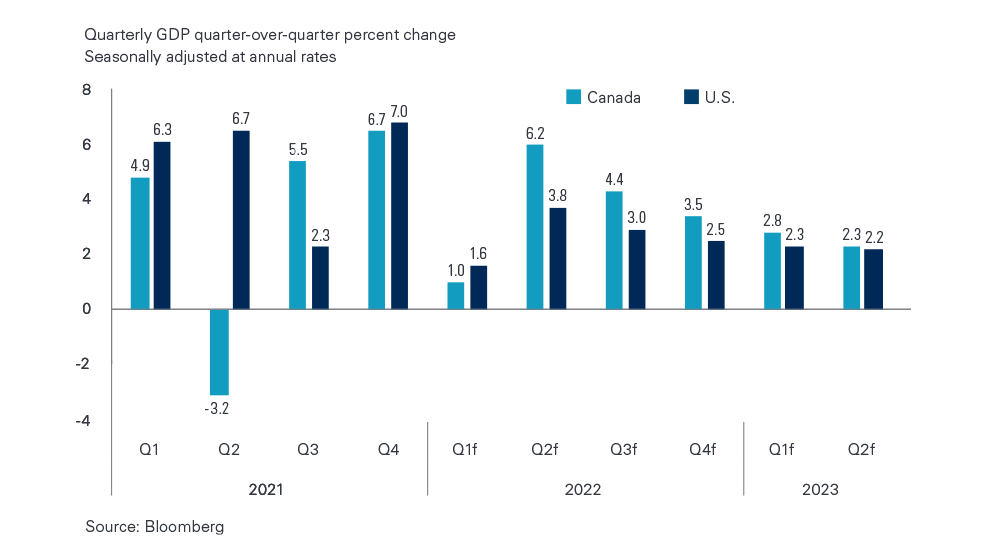 The Bank of Canada overnight rate

On March 2, the BoC increased its overnight rate to 0.50% from 0.25%. The consensus from financial markets is up to five additional 25bp rate hikes in 2022. Based on our observations, FCC Economics sees this as a slight overestimation. We believe there will be an additional four 25bps increases, bringing the rate to 1.5% at year-end (Table 1).

The U.S. Federal Reserve (Fed) is expected to be similarly aggressive with rate hikes, projected to raise its policy rate to the top end range of 1.50% by end of the year. Inflation has been more prominent in the U.S., where it hit the highest level since 1982 in January at 7.5%.

Both central banks could be forced to raise rates faster if inflation continues to rise. Conversely, sanctions could cause global economic growth to slow down resulting in increased uncertainty and slow rate increases. Despite the uncertainty, it would be prudent for businesses to prepare for increases in borrowing costs this year. 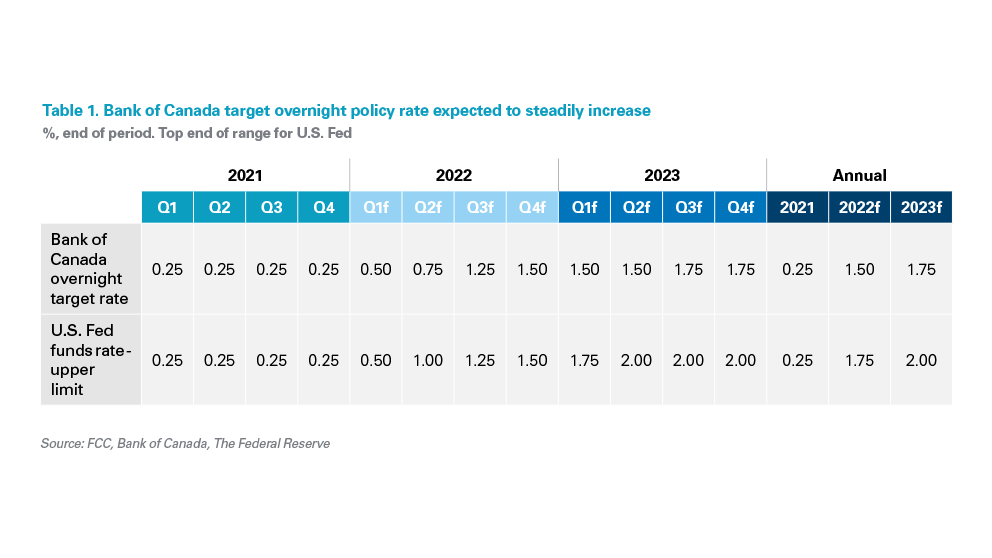 The magnitude of the BoC rate increases will be largely influenced by the rate of business investment, how fast consumers deplete savings accumulated during the pandemic and the degree in which the Russia/Ukraine conflict impacts the Canadian economy. Higher business investment leading to productivity gains counter inflationary pressures by using fewer resources to achieve the same output. On the consumer side, deploying savings into the economy too fast could put additional pressure on inflation and overheat the economy, forcing the BoC to increase rates faster. Savings remain high (6.4% at the end of Q4), and spending will likely be elevated; however, personal deposits in checking accounts declined for the first time since 2019 November (Figure 3), and this trend is expected to continue. High inflation is also eating some of the purchasing power of consumers. Based on these trends, we believe real spending will be strong in Q2 but decline to pre-pandemic levels in the second half of the year.

Figure 2: Total personal checking deposits declined in November for the first time since 2019 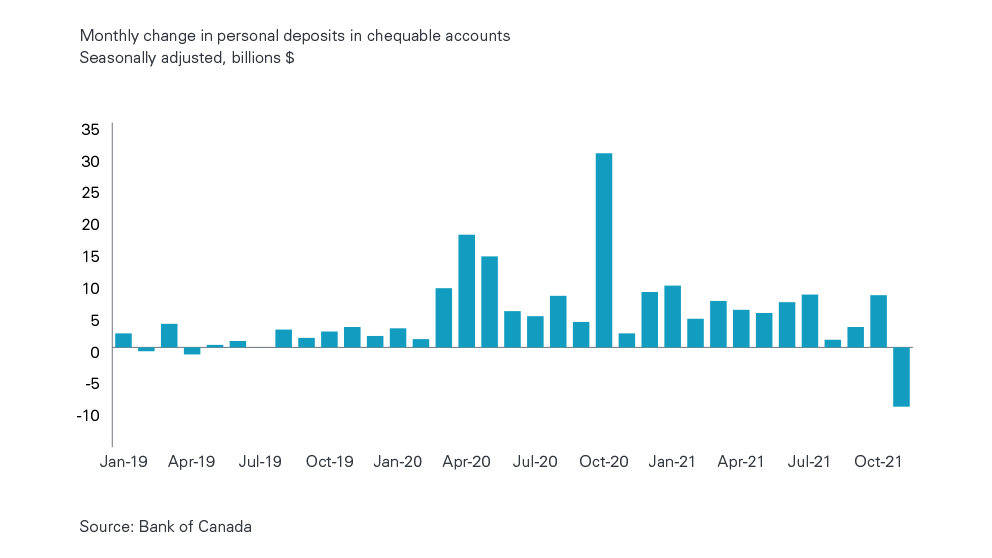 We expect inflation to remain elevated into Q2 2022 and start to slow towards a more acceptable rate in the second half of the year and into 2023 (Table 2). Weekly wages grew 3.1% in December YoY, and recent labour union contracts suggest strong wage growth in 2022. If wages grow faster than the rate of inflation, this could fuel further price pressure. Energy prices could also complicate the path of inflation.

Table 2. Headline inflation could start to decline to 2% in 2023 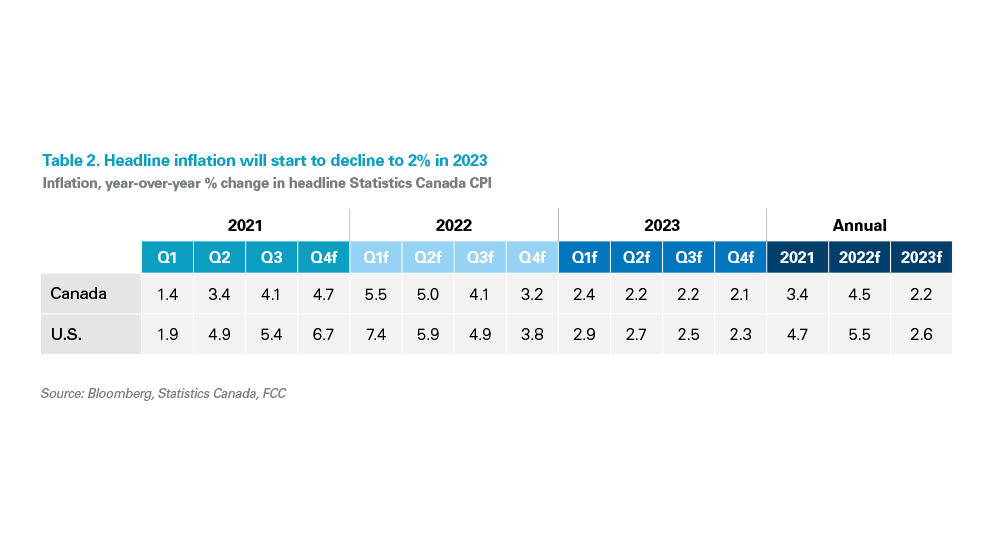 Table 3. Canadian bond yields are expected to rise into 2023 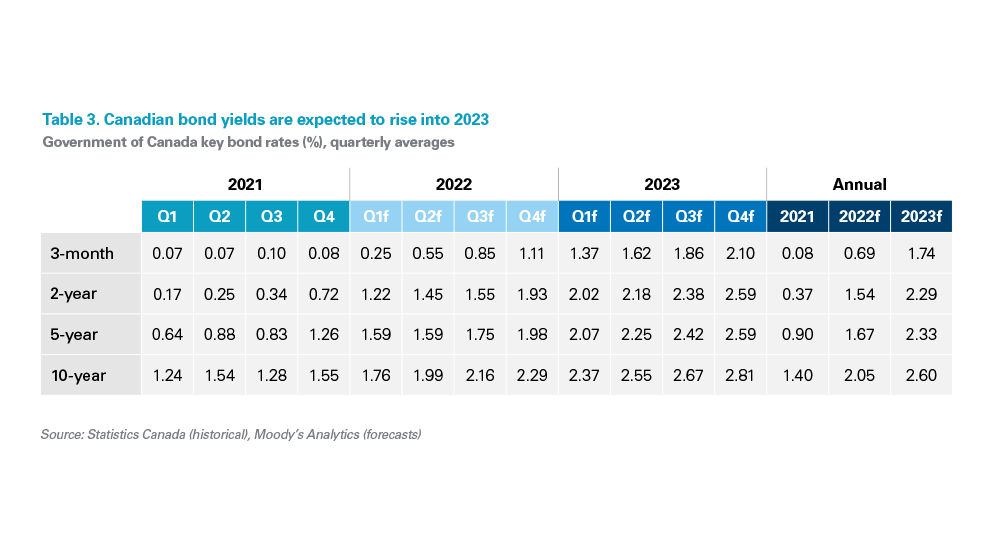 The U.S. economy has been less impacted by omicron, supporting the USD over the past 3-months. Investors are now turning to the USD as a safe-haven currency. Oil is at its highest price since 2011 due to sanctions although the loonie is well below its level from that year. Oil prices should currently favour a stronger Canadian dollar but the uncertainty and volatility with regards to the situation in Ukraine is supporting a strong USD. Beyond this, the path of interest rate hikes between Canada and the U.S. will determine future direction of the loonie. If the U.S. is more aggressive in hiking its policy rate, expect a decline in the CAD.

Prior to the invasion of Ukraine, the European Central Bank (ECB) was considering increasing their policy interest rate in Q4 2022. This is now in doubt. Ukraine is not part of the European Union; however, there is economic uncertainty regarding the impact of Russian-focused sanctions on the European economy. Inflation is expected to be elevated in Europe due to high energy prices. With Canada expected to raise its policy rate several times in 2022, inflation expectations are more moderate versus Europe, and combined with higher oil prices, we expect the EUR per CAD to increase. There remain many unknowns given the uncertainty of the war. 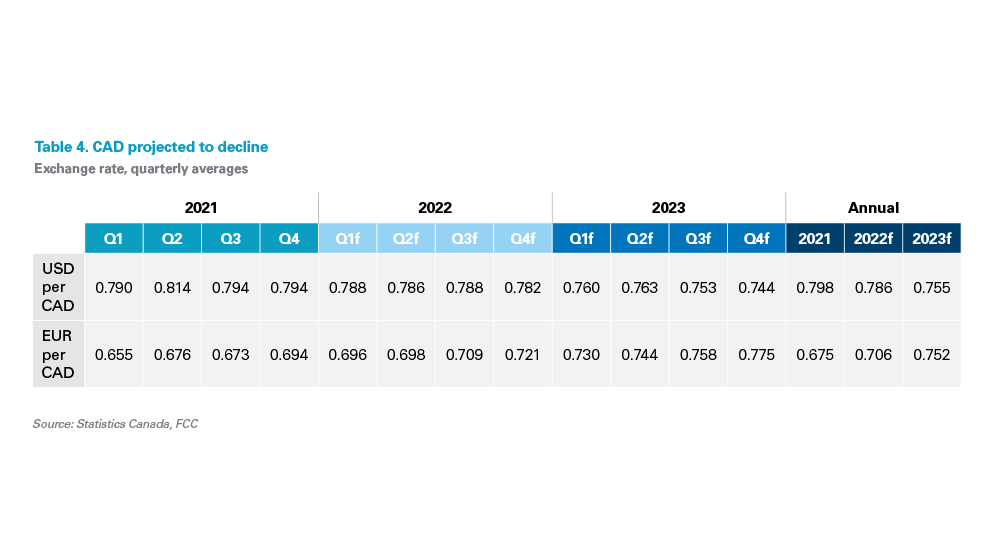