Not all interest rate increases are created equal 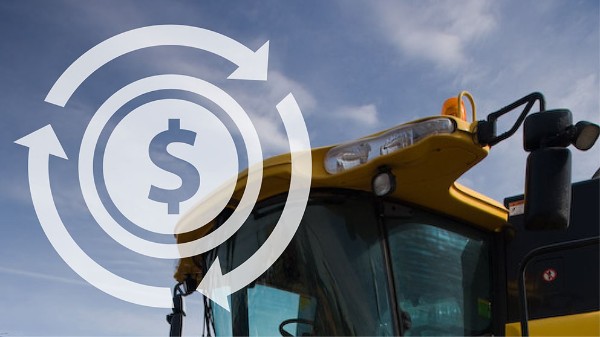 Rising interest rates are disruptive. They can hit cash flow budgets and create the need to adjust the level and mix of short and long-term liabilities. Or they can shift the demand for farmland, which can impact farm asset values. The bottom line is that interest rates – and changes to those interest rates – make a difference to the balance sheet.

There have been four hikes in the Bank of Canada overnight rate since our 2017 assessment of farm assets and debt. That has raised the potential for disruption and a weakened sectoral balance sheet.

I believe, however, Canadian ag will finish 2018 financially strong and head into 2019 on a good note. I might be forced to change my mind, but the fact is that the starting point – the relatively low level at which the recent rate hikes kicked in – will influence the degree of its impact on overall farm financial health. And more good news: the strong net income that we’ve seen for a few years will also soothe the bite of rate hikes.

How a strong balance sheet can help #CdnAg weather any potential rate hikes.

Net worth in Canadian agriculture grows as farm income expands

At the same time, net cash income for Canadian farms more than doubled, strengthening demand for farm assets. Asset values reached CA$692.2B in 2017 and because debt climbed at a manageable pace, the asset growth resulted in higher sectoral net worth. 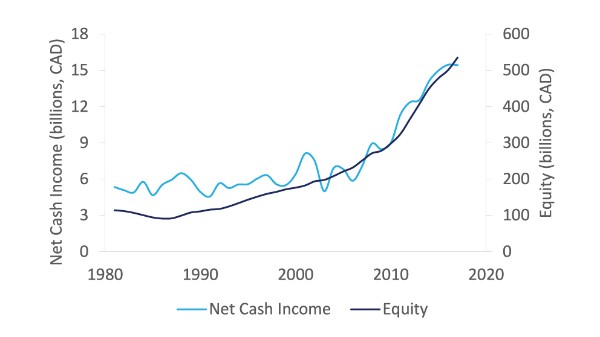 A strong balance sheet will allow Canadian agriculture to weather the four rate hikes. Even though financial markets are currently estimating an almost-certain probability of an increase in the overnight rate on October 23, with a 50% chance of another hike in January, I don’t think any serious threat posed by higher rates will materialize, and here’s why.

Current interest rates, while increasing, are still low enough to produce a relatively weak impact on ag’s overall financial health. The bank rate in Canada declined to an all-time average annual low of 0.6% in 2009 (Figure 2). Since then, its maintained average of 1.07% has also contributed to the demand for land and other assets.

But what if the average bank rate in 2017 had been 2% instead? An increase of 50 basis points in 2018 would bring the year’s average rate to 2.5%. If we use the relationship illustrated in Figure 2 to calculate the hypothetical impact, that kind of shift in asset values and debt could erode the sector’s equity by as much as 7%.

Applying the same 50-basis-point increase to the actual 1.07% rate in 2018, which would bring the year’s average rate to 1.57%, means a possible 1.3% decline in equity. It’s “possible,” because stronger farm income reduces the impact of higher rates, and I’m assuming that 2017’s good net income won’t fall in 2018. 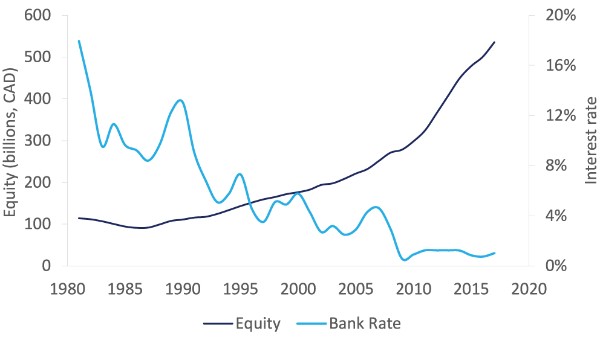 Financial and economic factors often move together. Knowing the basics leads to a better understanding of the outcomes for different scenarios:

Rising interest rates are a reminder, or possibly a push, to establish sound risk management. For further advice, visit your accountant or an FCC Relationship Manager.

Amy joined the FCC Economics team in 2017 to monitor agricultural trends and identify opportunities and challenges in the sector. Amy grew up on a mixed farm in Saskatchewan and continues to support the family operation. She holds a Master in Applied Economics and Management from Cornell University and a Bachelor in Agricultural Economics from the University of Saskatchewan.