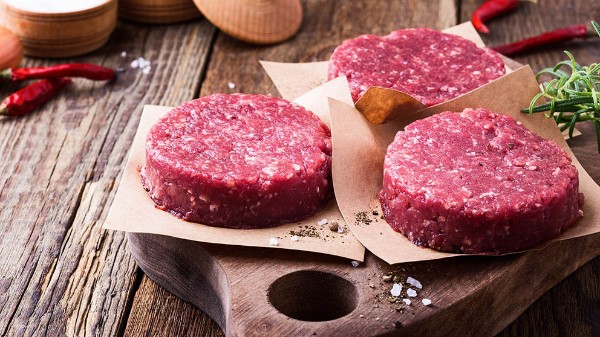 Protein has been a hot topic on the dinner plate of Canadians.  Plant-based proteins have received a lot of attention lately. But what do we know of the actual demand and preference for animal proteins?  We introduce a quarterly demand index to measure consumption preferences for beef and other meats. The barometer reveals the preference for beef remains strong.

Canadian per capita beef consumption has been on a declining trend over the past several decades. There are multiple reasons, but economics play a role. Beef consumption declined 11.5% from 2013 to 2015, reaching a low of 16.12 kg per person. This coincided with retail beef prices rising 30.7% over the same period.

Evaluating prices, income and consumption patterns together reveals possible differences between consumer preferences and actual consumption trends. When incomes grow, beef prices decline or the prices of competing meat rises, consumers should be purchasing more beef. The opposite is also true. So we compare expected changes in beef consumption to actual patterns. The difference which is not explained by economic factors is a preference measure, or demand index.

Figure 1 illustrates beef consumption and demand indexes. Both measures start at the same point (2010). The decline in beef consumption is pronounced after 2012.  While consumption declined, the demand for beef remained strong, and even increased from 2014 onward. Retail beef prices rose 13.5% that year, followed by an additional 15% in 2015. That could have triggered a larger decline in consumption if it were not for positive consumer preferences. 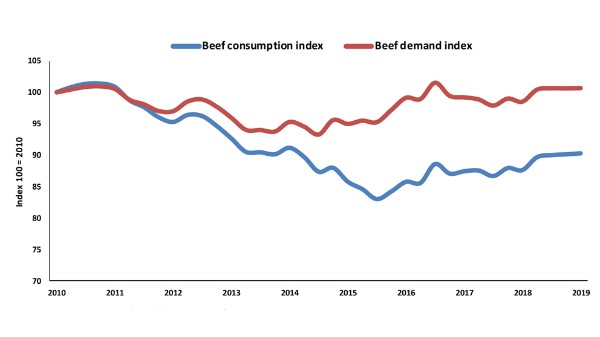 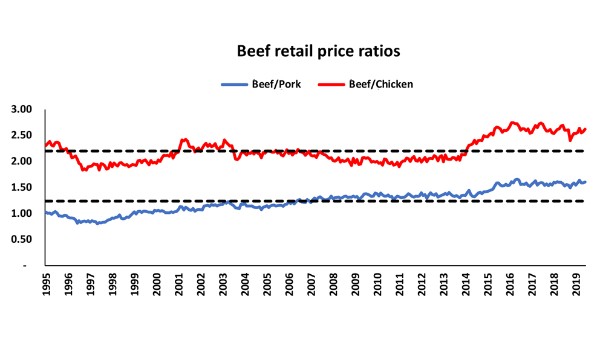 Beef consumption in 2019 appears to be relatively stable to 2018 trends. African Swine Fever (ASF) is however expected to cause food and meat inflation for the remainder of 2019 and into 2020. In addition, consumption is expected to fall as retail prices of beef will likely see some short-term price increases following a fire at a U.S. packing plant in August. The fire at the U.S. packing plant should lower the retail supply as the U.S. plant represents close to 6% of U.S. slaughter capacity.

Some substitution from animal proteins towards plant-based protein is expected in the North American market. As income levels rise, food preferences become more diverse, complex and increasingly segmented – a trend that is becoming more apparent in Canada. However global consumption of meat continues to grow especially in emerging markets.

Global demand remains strong with global consumption of beef projected to grow 1.4% in 2019. The long-term outlook for the meat industry is favourable, with an increasing focus on the export market.   It is possible for both the meat and plant-based protein sectors to grow in Canada – this can all be good for Canadian agriculture.

Leigh Anderson is a Senior Economist at FCC with experience in agricultural markets and risk. He specializes in monitoring and analyzing FCC’s portfolio, industry health and providing industry risk analysis. In addition to his speaking engagements on agriculture and economics, Leigh is a regular contributor to the FCC Economics blog.

Leigh came to FCC in 2015, joining the Economics team. Prior to FCC, he worked in the policy branch of the Saskatchewan Ministry of Agriculture. He holds a master’s degree in agricultural economics from the University of Saskatchewan.