How to recognize volatility in a market 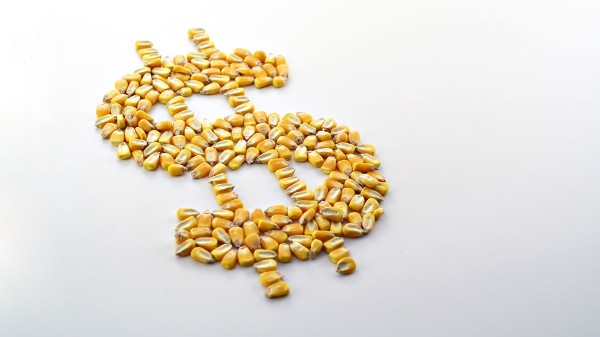 Today’s release of the USDA estimates of the supply and demand balance for the 2018-19 marketing year suggests a slightly improving pricing outlook for wheat and corn due to a stronger pace of U.S. exports this year. The pricing outlook for soybeans is unchanged despite lower anticipated year-end inventories for 2017-18.

Using average price projections is an easy way to measure future potential profitability. We’re sure to see prices evolve this year and will probably experience volatility. But volatility’s bad rep isn’t completely deserved. You can actually use it in your marketing plan – and I’m going to show you how.

Start with the stocks-to use ratio

It’s not perfect, but the stocks-to-use ratio (SU) did accurately reflect the average U.S corn price in seven of the last nine years (seen in Figure 1). But, there are years in which the relationship between the two breaks down.

2012-13 and 2013-14 recorded a significantly higher and lower average price than what the SU ratio suggested. And, as it turns out, corn prices were more volatile in these years. 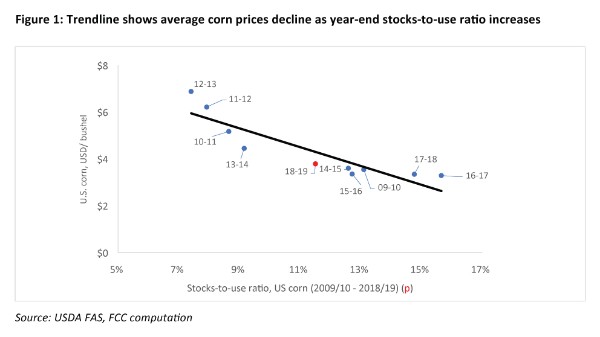 The four marketing years on the left hand-side of the chart are the most volatile years as measured by the dispersion in weekly U.S. corn prices.

The lesson? A tight SU ratio is likely to generate prices that are more volatile and higher on average than other years when the SU ratio is large.

Weather can have a significant impact on prices. Lower yields lead to a decline in the availability of supply and can lead to significant decreases in the SU ratio. For example, the 2012-13 year-end SU ratio projected in May 2012 was 13.7%. The 2012 year was one of the driest year on record in the U.S. Midwest. Yields for the 2012 crop kept being revised downward, and ultimately the 2012-13 SU ratio reported in August 2013 declined to 5.8%! A tighter SU ratio led to more volatility.

The 2018-19 U.S. corn, soybean and wheat SU ratios are not projected to be tight from an historical standpoint, so that should keep volatility under wrap. Yet, dry conditions in the U.S. Southern Plains and parts of the Midwest remain a relevant factor to monitor.

Demand can also play a role in volatility, which usually mean the SU ratio will not perfectly indicate future volatility. At the current projected level, the 2018-19 U.S. soybean SU ratio would be higher than nine of the last 10 years. Resuming trade tensions between the U.S. and China could lead to lower U.S. exports for 2018-19, raising the SU ratio. In that case, prices would likely fall, and price volatility be more significant.

Volatility can also be present in a situation when the SU ratio is large, especially if demand considerations are behind the increase in the SU ratio. The 2018-19 marketing could very well turn out to be a good illustration of this situation.

Volatility is not just about downside price risk

Volatility can be a useful indicator. Do you know how to recognize it, and then use it to develop a good risk management plan?

While simple measures of volatility capture both negative and positive deviations from an average price, the latter are opportunities to lock in prices that would not exist in a stable pricing environment. It is important to build a solid marketing plan that is aligned with the risk an operation can face.

The one statistic you need to know this crop year

The stocks-to-use ratio is a power statistic to understand demand and supply factors that impact crops.