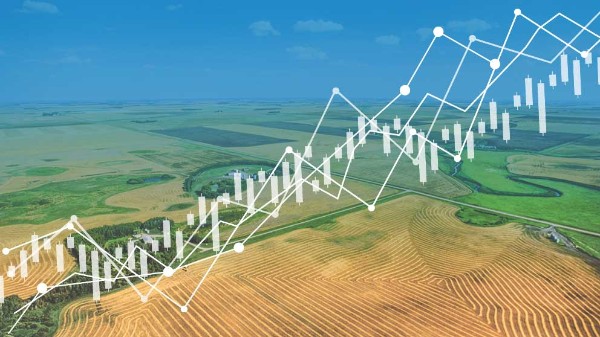 Planting is in full swing. If the weather cooperates, we expect record or near record yields for Canadian crops because yields trend upward. Agriculture has long experienced productivity gains. Innovations such as GMOs and precision agriculture are transforming today’s agriculture. CRISPR gene editing technologies are expected to soon make positive contributions.

Figure 1 shows the remarkable increase in yields for wheat in Canada. Yields vary from year to year because of weather, but generally trend up. Wheat yields in the 1920s were about 15 bushels per acre. Today, they’re about 50 bushels per acre, making land more than three times more productive than it was 100 years ago.

Notice how yields have started increasing at a faster pace during the Green Revolution in the 1950s and 1960s. Although quiet and often forgotten, it was one of the most transformative events of the 20th century.

During the 1950s and 1960s, the farm sector saw the introduction of synthetic fertilizers, hybrid crops and pesticides. The development and the adoption of these technologies helped feed a rapidly growing population and caused the number of farms to decline as they grew to adopt productivity enhancing technologies. 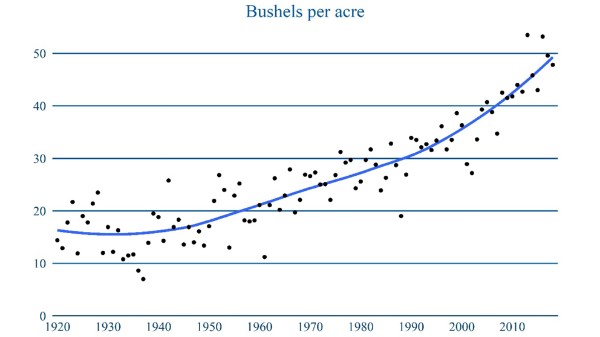 The wheat example is not unique. Productivity gains have continued since the Green Revolution. I’ve documented on my Twitter feed other examples of productivity gains in Canada agriculture:

Productivity gains affect a farmer’s expected revenue per acre but not always positively. Tweet this

The effect of increased yield on income isn’t obvious. On one side, productivity gains increase revenues per acre by augmenting output. On the other side, as yields trend up for all farmers, they increase total supply and put downward pressure on prices.

Whether crop revenues per acre increase depends on yields increasing at a greater pace than the price tends to decline, and whether demand increases.