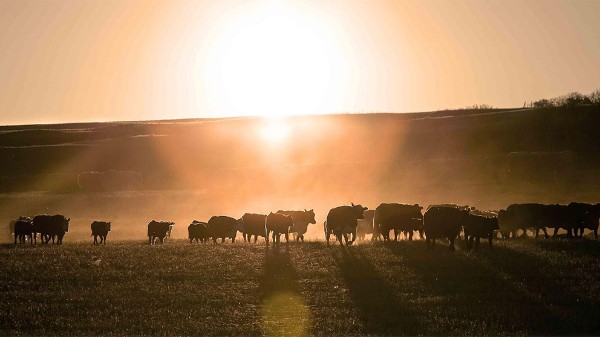 The U.S. border is within sight from the Ross’ comfortable home. Owned by Chad Ross and his family, the L-7 Land & Cattle ranch lies 15 minutes from the town of Estevan in the southeast corner of Saskatchewan. Behind the calves born out on pasture lies a classic Canadian scene: a prairie skyline dotted with coal mines and the bright orange pumpjacks that hum throughout so many of these fields.

It was early 2017. Across the border from the L-7, officials with the Trump administration were preparing to announce plans to renegotiate the North American Free Trade Agreement (NAFTA). Throughout the year, the U.S. would make clear they’d abandon any agreements they believed to subvert U.S. interests.

Canada’s economy is well-integrated to the U.S., with the beef value chain being one example of product that is both imported and exported by both countries.

The next two blog posts will illustrate how those interests matter to a large Saskatchewan cattle ranch, and the Canadian cattle and beef supply chain generally. L-7 Land & Cattle currently market cattle to Cargill’s plants in Alberta as a part of the Canadian Beef Sustainability Acceleration Pilot.

Like the L-7, most Canadian ranches supply meat that’s consumed in the Canadian market. Although the journey from a pasture in southern Saskatchewan to restaurants and retailers throughout Canada is only one possible trip through the Canadian cattle and beef supply chain, it’s a common one: in 2017, 61% of the beef produced on Canadian soil stayed here. Even still, every Canadian producer is influenced by global trade patterns and the geopolitical events that shift markets. The prices Canadian ranchers pay for feed and the prices they get for their cattle reflect that global landscape.

Every Canadian producer is influenced by global trade patterns and the geopolitical events that shift markets. Tweet this 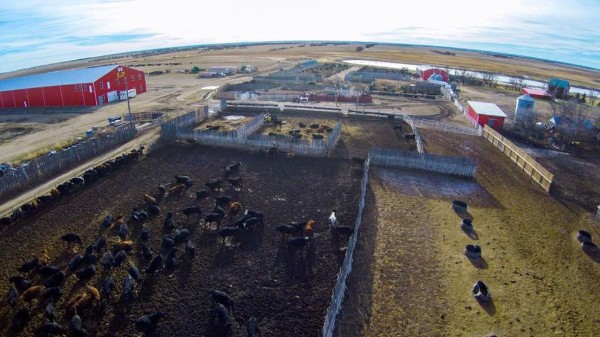 The Ross family has ranched here for 112 years. Chad, his wife Crystal and his father Brian have endured in an industry hit by disrupted markets, bad weather and herd disease on the way to becoming a 1,500-head operation. That’s large in a Canadian industry that has averaged 3.3 million new calves each year over the last five years.

Those calves were born at a time when the market was unexpectedly robust. 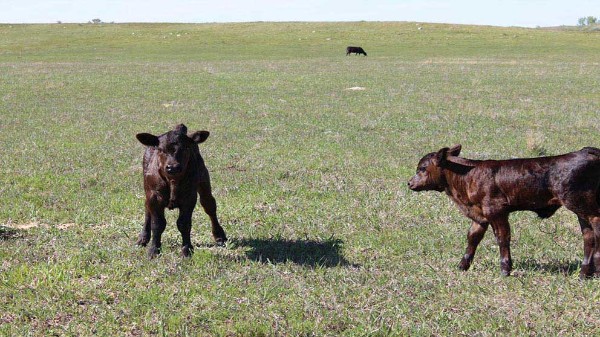 Despite an expected jump in both global and North American 2017 production, the outlook for Canada’s cattle industry had showed promise in January. The global trade landscape was already suggesting the volatility that would feature prominently throughout the coming year and into 2018, but demand for red meats showed signs of impressive growth. Alberta fed cattle prices averaged $191.51/cwt in the spring, well above seasonal expectations. A growing U.S. herd and recent processing investments had boosted production there since 2014, prompting lower beef retail prices that spurred both North American and global beef demand beyond expectations. That bumped up the prices for North American fed cattle (or slaughter-ready cattle) from feedlots, who could afford to pay cow-calf operators more for the calves they would fatten.

The Rosses run their own feedlot. Many of the calves born on the L-7 leave the ranch as fed cattle for processing. But in 2017 the Estevan area was dry, part of a largescale drought across the Canadian Prairies and the U.S. too, driving up feed prices throughout North America. Because the U.S. is the world’s largest beef producer, shifting costs of feed grains there has ripple effects well beyond its own borders.

In southern Saskatchewan, feed prices climbed. In March, barley cost C$164/tonne in western Canada; between October and December, it cost roughly CA$220/tonne, an annual gain of about 24%. The higher costs of holding the animals longer meant more cattle were sent for processing in the second half of the year, often at lower carcass weights. Domestic beef production rose 3.2% year-over-year.

Weather and feed costs partially explain when ranchers sold their cattle in 2017. But the prices Canadian ranchers received, whether their product ended up in the States or not, was also influenced by the CAD – USD exchange rate.

Why a low Canadian dollar is good for Canadian beef

J.P. Gervais explains how a low Canadian dollar can benefit the beef value chain and result in better profitability for our producers and packers.

In part two, we follow the Ross cattle as they move from Saskatchewan to Alberta for processing. There, the meat packers link together the key stages of Canada’s cattle supply chain.