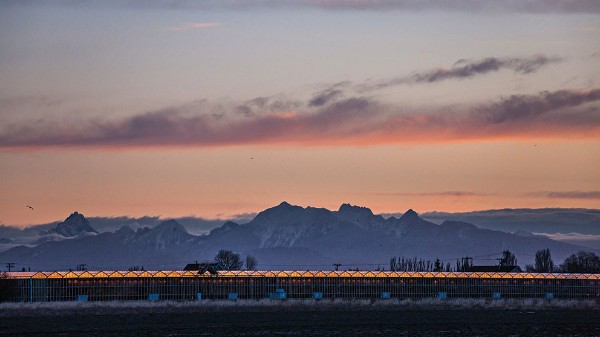 Demand for Canadian farmland remained strong in 2020 due to record-low interest rates and improved crop production revenues. According to the FCC Farmland Values Report, farmland values increased 5.4% in 2020.

Average farmland values have increased every year since 1993 and were more pronounced from 2011 to 2015. Since then, Canada has seen more moderate single-digit increases. But despite low interest rates and high farm revenues in 2020, affordability was at its second-lowest level in the last 20 years.

In this post, we look at the farmland values report findings through the lens of ownership costs.

Most farmland is purchased with a combination of equity and debt. And the affordability of farmland is a matter of land prices, financing costs and farm revenues.

Let’s assume we have a new land purchase with a down payment of 25% and a loan amortized over 25 years. The annual payment will be based on the loan interest rate.

Figure 1. Canadian average farmland values vs. the cost to purchase 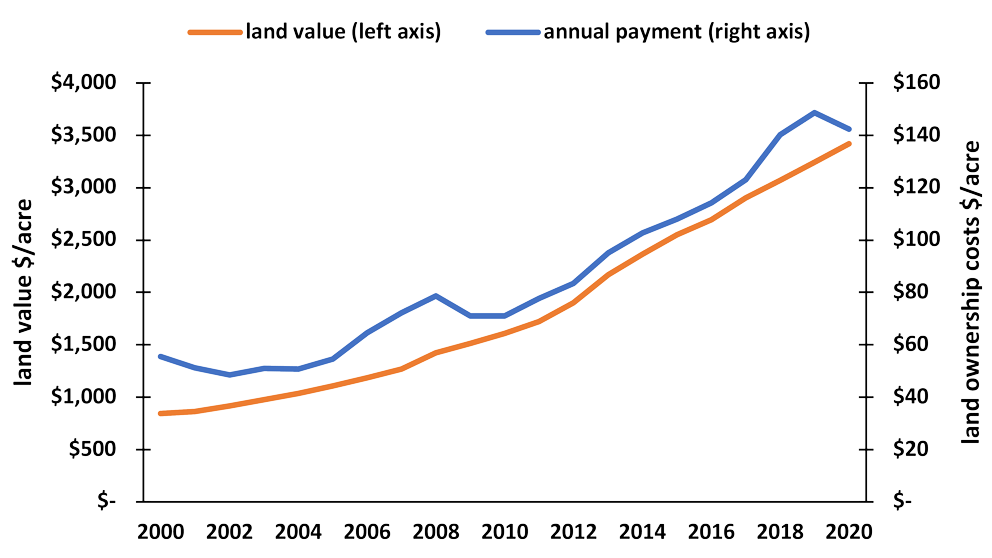 A measure of affordability is obtained by comparing land payments relative to gross revenues derived from crop production (Figure 2). We used average provincial yields and prices to measure revenues – a soybean-corn rotation in Eastern Canada, a canola-wheat rotation in Western Canada and a potato-wheat rotation in Atlantic Canada. 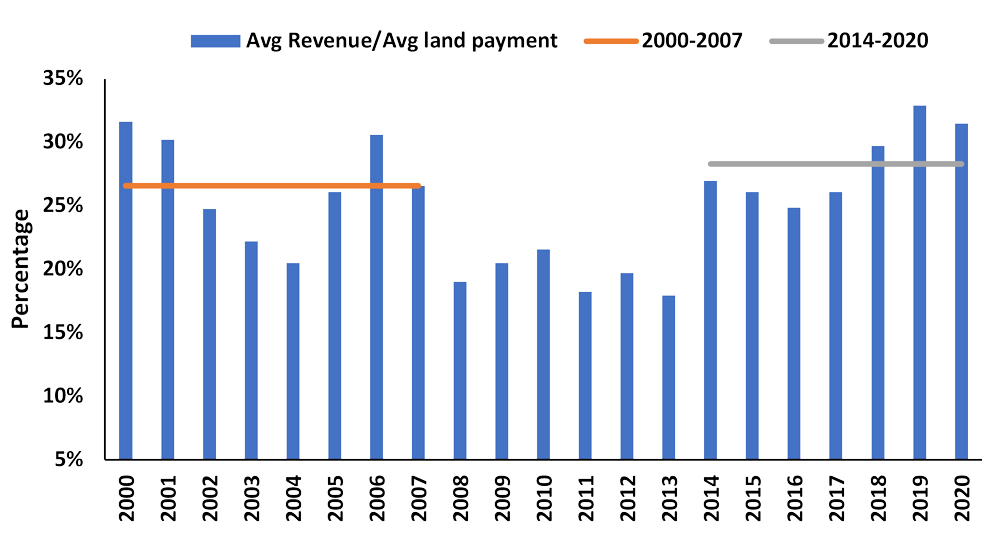 Land payments as a percentage of crop revenue declined from 33% in 2019 to 32% in 2020 due to strong crop receipts and lower interest rates. This remains slightly higher than the 2014 to 2020 average of 29%. The 2008-2014 average share of crop revenues devoted to ownership costs was the lowest. That period also had some of the highest increases in farmland values, highlighting the strong annual returns in the grain and oilseed sector during this period. As crop revenues following 2014 showed stability, land values increased, resulting in affordability declining.

The trends are similar across all provinces, but the proportion of crop revenues to cover payments varies considerably. In Saskatchewan, the share of crop revenues (canola-wheat rotation) relative to average land payments was estimated at approximately 18% in 2020, down from 19% in 2019.

In Ontario, the share of crop revenues (soybean-corn rotation) is much higher at 66% in 2020. Ontario agriculture is diversified across many enterprise types, including horticulture and livestock sectors that compete for farmland. Also, farmland values vary considerably within Ontario, ranging from as low as $2,000/acre in Northern Ontario to as high as $32,900 in the Central West region. High valued land would require gross revenues of $4,200/acre to reach the national average of 32% of revenues covering payments.

Elevated payment/revenues ratios suggest that observing farmland purchases with a negative net cash flow is possible in the current environment. In this case, the ability to “subsidize” the purchase from other sources of revenues or other land will factor in the buyer’s decision.

Monitor interest rates trends as the economy recovers. There are some early signs of rising yields for longer-term bonds. Understanding the influence of various rate and farm income scenarios on farmland payments is an essential component of a solid financial risk management plan.