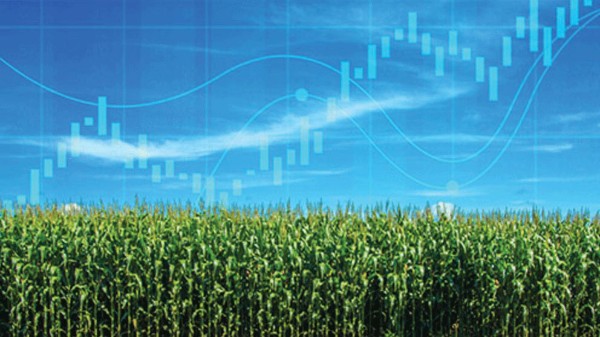 FCC’s most recent projections suggest farm cash receipts could climb 15.9% to $96.0 B in 2022, driven by robust commodity prices and prospects of much stronger crop yields. This would surpass the 2021 record high, which was itself an increase of 14.9% over 2020. The Canadian agriculture industry seems financially healthy based on gross farm income alone. And even if operating farm expenses in 2021 climbed 10%, the conclusion stays the same. Net cash income in 2021 was an all-time high of $22.6B, an increase of 29% over 2020.

But the agriculture operating environment is evolving fast and sustained inflationary pressures on farm input prices dampen the outlook. Fertilizer prices climbed at least 50% YoY, much more in some cases. Farm fuel is up 35% and the Bank of Canada (BoC) lifted its overnight rate by 1.25% over 3 months, with increases of 0.50% expected in July, September and October. Knowing that farm debt outstanding increased 7.1% to $129 B at the end of 2021, is financial risk in Canadian agriculture significantly elevated in the current inflationary environment?

Interest rate increases come in all forms and shapes

Inflation and interest rates are directly connected. The BoC inflation target is 2%, much lower than the latest inflation data. It aims to slow inflation by increasing the overnight interest rate, which affects the whole banking system and slows aggregate demand in the economy.

The share of disbursements for variable rate lending declined to 38% at the end of 2021. It got to a low of 29% in Q1 of 2022 as it became obvious the BoC would have to lift its overnight rate to fight off growing inflationary pressures. Historically, when the BoC increases its overnight rate, FCC experienced an increased demand for fixed rate mortgages and saw conversions from variable to fixed rate.

In summary, the higher interest rate environment will cause interest payments to climb over time, instead of causing a major shock.

The ability to service debt is the most critical financial risk indicator for a farm operation. It looks at how much cash a business generates for every dollar of loan principal and interest owed. At the aggregate industry level, it’s difficult to make informed assumptions about the amortization on the total farm debt outstanding to evaluate the industry debt service coverage. Instead, one useful indicator to evaluate financial risk in the context of rising interest rates is the interest coverage ratio (ICR). It evaluates the ability to pay interest on outstanding debt by using net cash income before interest payments, divided by interest expenses.

Will financial risk climb with rising interest rates? Let’s assume that farm cash receipts grow 15.9% in 2022 as per our projections. Also, assume that expenses will grow at this rate while farm debt increases at the same pace as last year (7.1%). The increase in the effective interest rate paid on farm debt will depend on the mix of fixed and variable rate loans.

A.  Minor increase in the effective rate to 4.1%

B.  Moderate increase in the effective rate to 5.1%

C.  Substantial increase in the effective rate to 6.1%

Scenario C is quite aggressive in that the last time the average effective interest rate paid on farm debt was this high was in 2006. At the time, prime rate averaged 6% throughout the year. Under scenario C, the ICR comes back near its average (3.8) between 1981 and 2008. 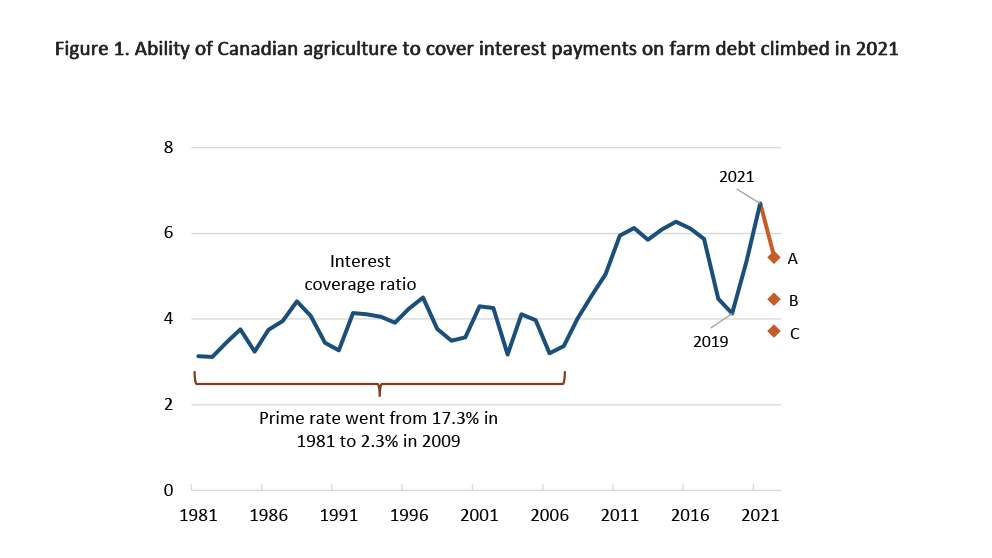 Farming under inflation is nothing new, yet each inflationary period is unique. A critical feature of the current inflationary phase is the growth in farm revenues. Global food demand continues to be robust while supply is limited in many producing countries. Canadian agriculture is in a good spot to weather inflationary pressures and higher interest rates. Yet, operations will need to adjust to farming under high interest rates – a situation unlike the one experienced for the last 15 years.

Operations should run various assumptions with regards to commodity and farm input prices, yields, interest rates to understand their financial risk exposure, and seek different strategies to mitigate risk if they find situations that exceed their risk tolerance.