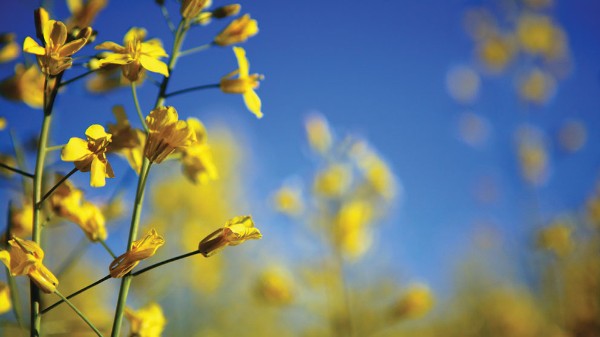 Large supplies of canola, softer global demand for oilseeds largely due to the spread African Swine Fever in China and market access issues have led to a weaker canola market. But, despite these challenges, canola prices remain resilient. Potential swings in supply and demand of canola highlight the need for producers to develop a solid risk management plan and revisit it on a regular basis.

Both domestic and export demand fuelled the increase in canola production. In 2018, Canada exported 10.8 MMT of canola seeds, 90% more than 2009. The largest export market remains China, representing 4.8 MMT (over 40% of total exports). Significant expansion in Canadian canola crush capacity has resulted in a 124% increase in domestic canola use, totalling 9.3 MMT in 2018, or 43% of production.

Weaker global demand for oilseeds is behind the pullback in prices

The canola market softened recently due to a combination of large stocks, lower global demand and market access restrictions. Average Saskatchewan canola prices declined 14% from a high of $513/MT in May 2017 to $438/MT the third week of March. Canola prices declined a further 9% after China revoked the export license of a second Canadian exporter.

Global demand for oilseeds is partly function of the demand for animal feed. The USDA estimates that the spread of the ASF will cause a decline of 13% in Chinese pig production which could lead to a 40% decline in canola imports in crop year 2018-19 when combined with market access restrictions. Other estimates suggest a bigger impact with a projected 35% drop in China’s pork supply.

Domestic canola crush is expected to continue operating at or near capacity. AAFC is projecting the crush to remain at 9.3 MMT in 2019 despite growing global supplies in the oil, seed and meal markets.

The relationship between the canola stock-to-use ratios and average annual prices in Figure 1 suggest current canola prices should be $20 to $30 per MT lower given AAFC’s 2019-20 stock and price projections. The expected average price is low, but weather concerns continue to provide support to prices. 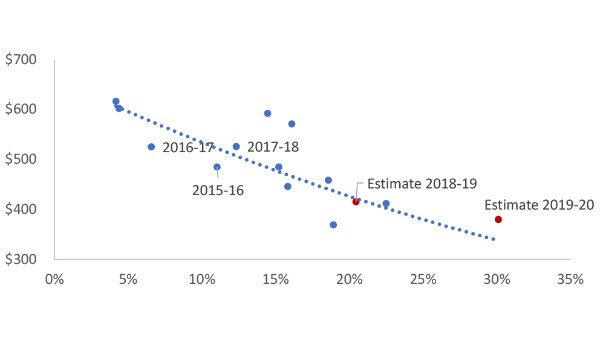 The long-term prospects of the Canadian canola industry remain strong, despite the near-term headwinds. The balance of strong domestic use relative to exports for canola is a major advantage compared to other commodities grown in Canada. Marketing the 2019 crop could however be delicate if weather or demand trigger swings in prices. Watch seeding progress in Canada and the U.S., climatic conditions, and changes in export opportunities. A sound risk management and marketing strategy is paramount to success.