Canada food and agriculture trade are resilient – despite a pandemic 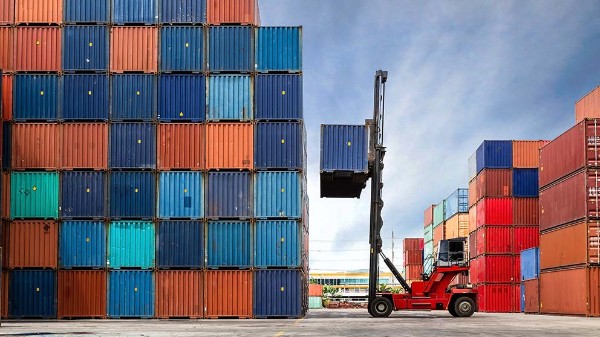 For more insights on agri-food, check out our 2020 Trade Rankings report: Opportunities and challenges to diversify Canada's food exports.

Our June blog post on trade examined if the COVID-19 pandemic could cause permanent distortions in trade patterns as countries seek to become more self-reliant. Now, with a few more months of data to provide an answer, we see that Canadian food and agriculture has performed relatively well.

In Q2, the food trade balance was positive, with a $126 million trade surplus. In Q3, the situation changed, and Canada recorded a food trade deficit of $219 million, resulting from a drop in exports of animal or vegetable fats and oils and an increase in beverages imports. For the first three quarters of 2020, Canada has a trade surplus of $480 million.

The pandemic’s impact on trade is undeniable, but Canada is still poised to have a trade surplus in 2020. 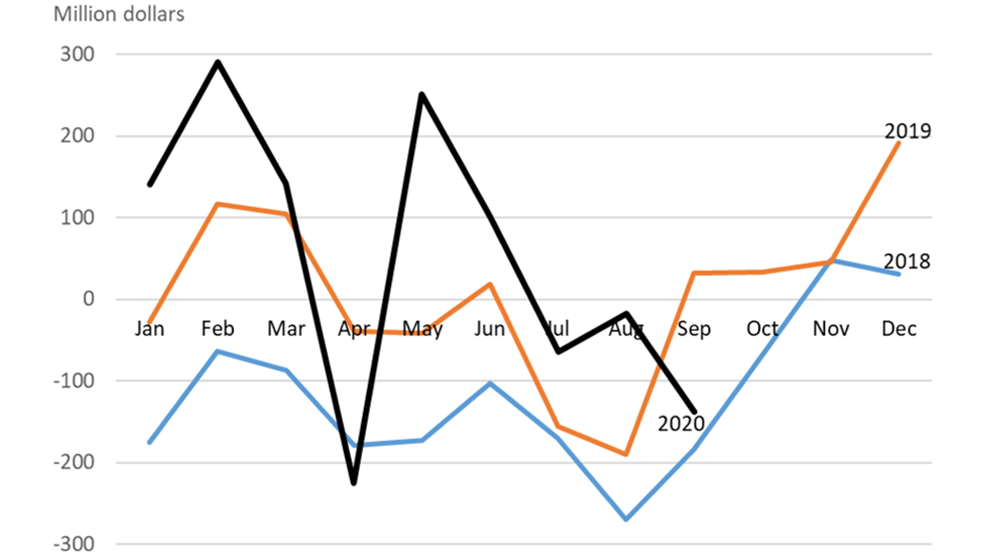 One reason for Canada’s impressive trade performance in the food sector is pork exports. China continues to deal with an outbreak of African Swine Fever (ASF) and imports massive pork quantities from other nations. China’s hog industry is rebuilding, and we can expect China’s import demand to slow over the next year. Germany is now also dealing with ASF and is banned from exporting pork to China, opening the door to Canadian exports. Moreover, the upward trend in pork overall cutout values has boosted export values.

Pork export declined for three consecutive months since its peak in May but rebounded in September. COVID-19 outbreaks in pork packing plants did not help export numbers because China suspended meat imports from plants reporting COVID-19 cases. The outbreak of ASF in Germany likely contributed to increased exports in September. 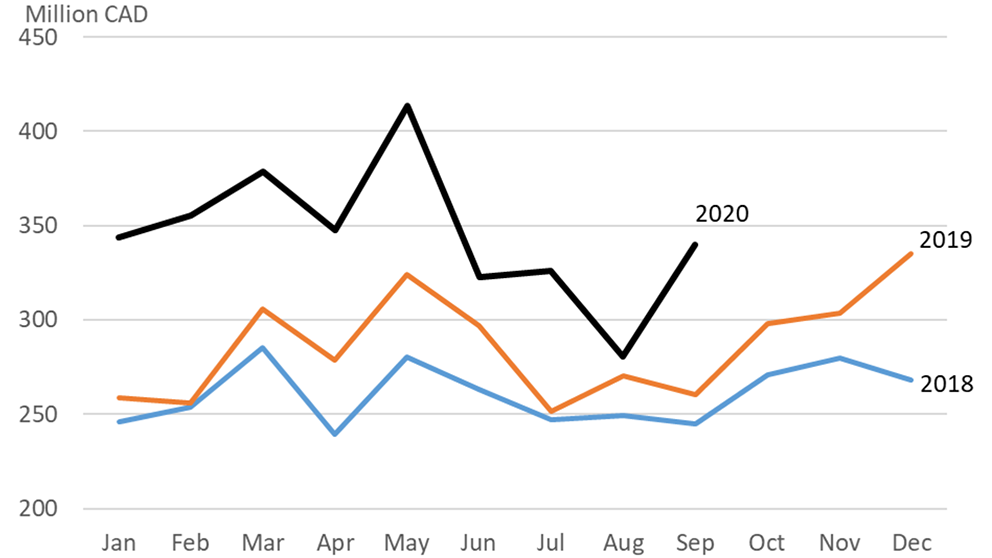 The figure below shows export values for wheat, canola, dried leguminous and soybeans, which account for about 90% of Canada’s export value of grains, oilseeds and pulses over the last three years. What’s remarkable about 2020, so far, is that exports peaked in March as a result of export delays from train barricades in fall 2019 and a rail strike in early winter. Prospects are positive for the rest of the year. The data indicates strong and early grain deliveries this fall, and prices are better than last year. Through the first three quarters of the year, exports of grain and oilseed were $16.5 billion.1  Total exports of grains, oilseeds and pulses in 2020 will likely exceed the $20.8 billion observed in 2015. 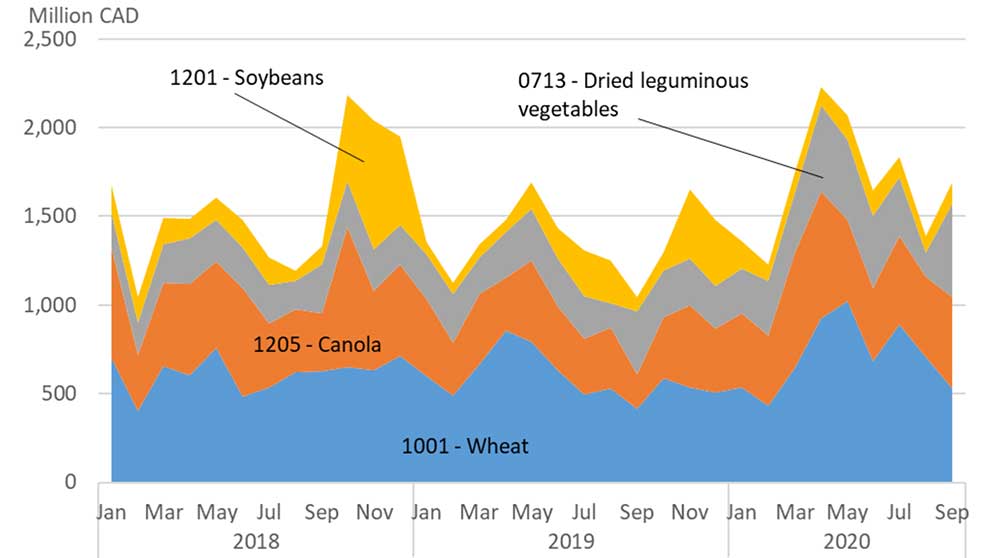 While it’s still early to quantify these agreement’s full impact on Canada’s dairy, the figure below tells us there’s no upward trend in dairy product import quantities so far. Except for a peak in cheese and whey imports in fall 2019 and a surge in milk and cream imports in June 2020, dairy products imports have stayed relatively constant. It’s important to monitor these imports as market access increases following the three agreements schedules. 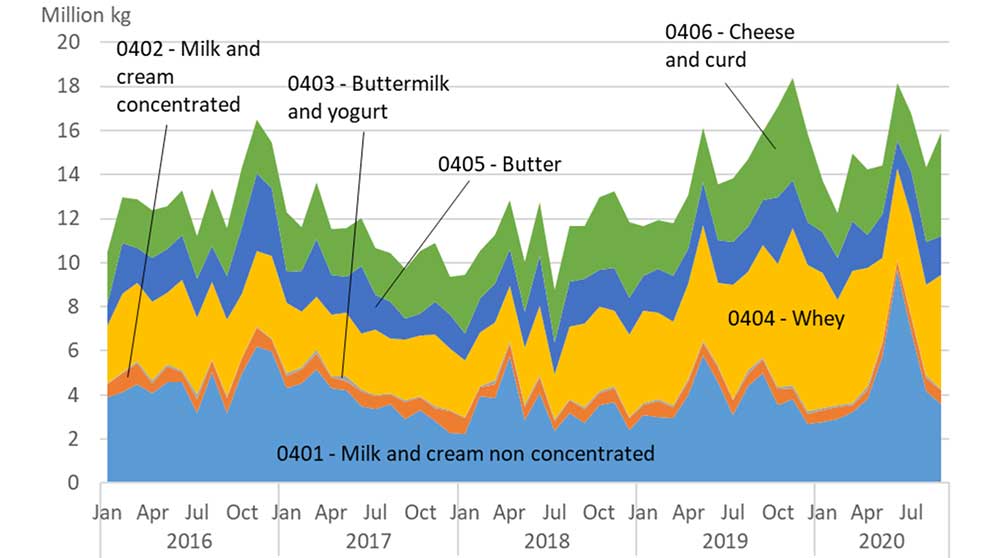 Trade resilient to the COVID-19 crisis

COVID-19 appears to have had minimal negative impacts on food and ag trade so far, based on the trends recently observed. In the longer run, the crisis may lead countries to revise their strategies for securing food supplies and turn toward more self-reliance. We’ll continue monitoring trade patterns for transforming long-run trends.