2022 Grains, oilseeds, and pulses outlook update: Prices soar due to war in Ukraine 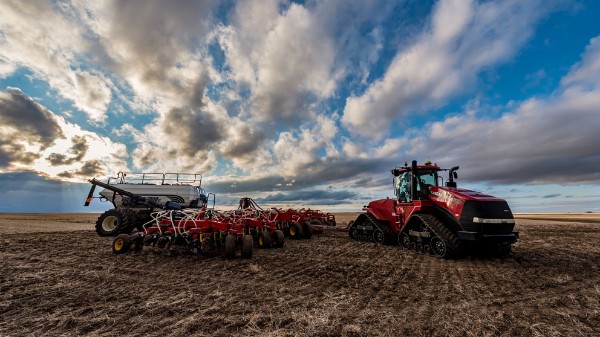 This is the first of three quarterly updates to our 2022 Outlook for major crops published in January. Over the next two weeks, we’ll update the Outlooks for dairy and cattle and hog.

Despite recent events, major trends to monitor in 2022 have not changed: inflationary pressure on input prices, geopolitical tensions, and global trade; that said, the Russian invasion of Ukraine has changed how we need to analyze these trends and manage the risks associated with them.

Our current forecasts show prices will remain strong for the rest of the marketing year (Table 1). Some prices will ease off their recent highs, while canola, corn and soybean prices should increase. Recent news from the US on the decision to extend the usage of E15 gasoline this summer provides an additional boost to corn prices. 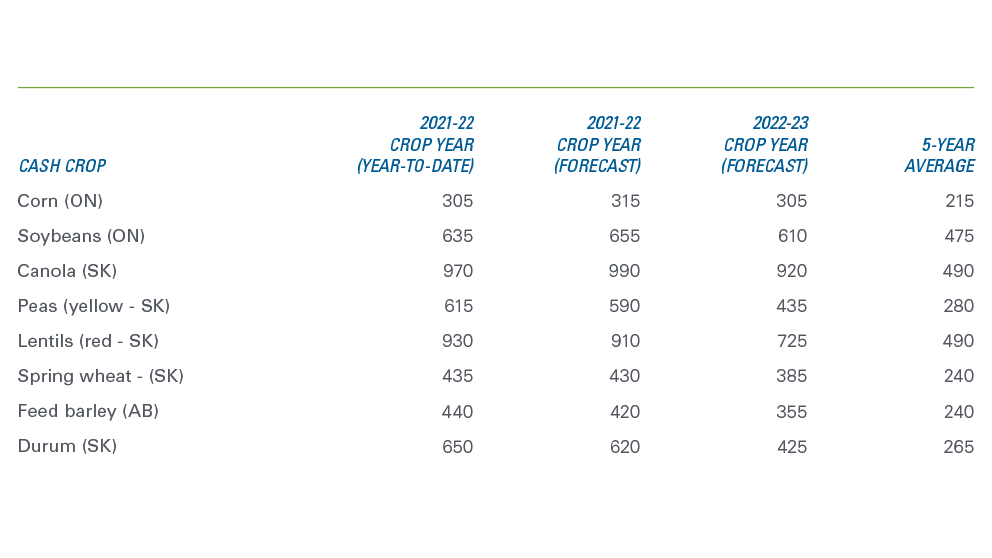 The invasion plunged global grain markets into a state of chaos. As we highlighted in early March, Ukraine and Russia are major exporters of many grains and oilseeds, particularly wheat, corn, rapeseed/canola and sunflower oil. Western sanctions and logistics issues are limiting old crop exports from these regions. The war raises many questions about the new crop: how many acres can be seeded this spring? If seeded, how much will be available to harvest? Will producers be able to get harvest completed? Without answers to these questions, combined with uncertainty about input and labour availability, it is understandable why ag commodity markets have been so volatile. The situation has left traditional buyers of Ukrainian and Russian commodities scrambling for alternative suppliers, causing prices to surge.

Markets have settled since then, but prices for traded commodities are still much higher than at the beginning of the year. Futures prices for wheat and corn are up 37 % and 32%, respectively (Figure 1). 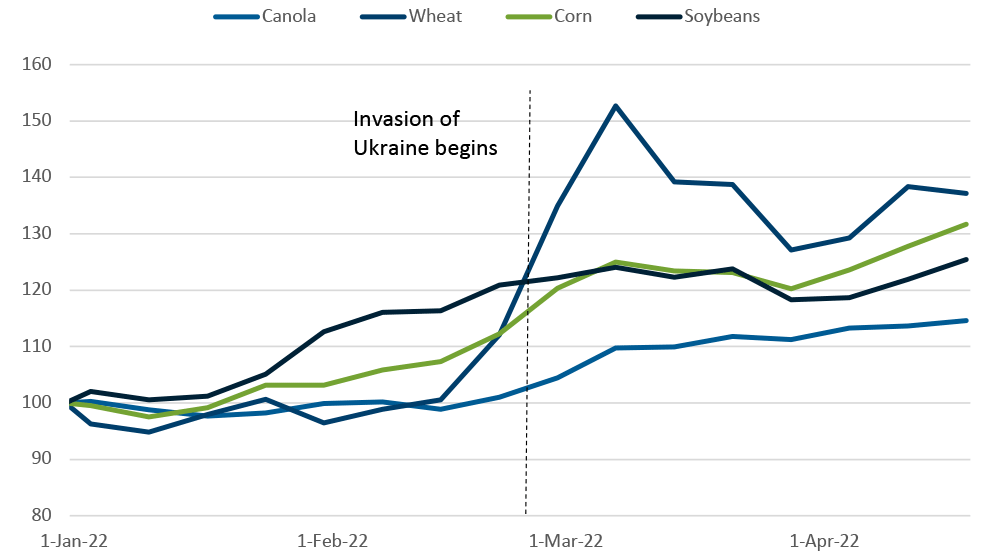 Input prices are up

The invasion of Ukraine added pressure to the fertilizer market. In 2021, Russia was the leading exporter of nitrogen fertilizer and the second-leading exporter of potassium and phosphate fertilizers. Belarus, a Russian ally also the subject of sanctions, was the third-largest exporter of potassium. From January to March, anhydrous, urea and phosphate fertilizer prices increased another 22%, 4% and 9%, respectively. But potash prices – after staying stable from August to January – jumped 155% from January to March. Economic sanctions on Russia are more heavily impacting fertilizer imports in Eastern Canada as it’s more dependent on fertilizers from that country, in particular nitrogen, and there is limited on-farm fertilizer storage in Eastern Canada.

Our forecast models show no slowdown in fertilizer prices growth. Average prices for the summer (May to August) will be 12-15% higher than March levels (Figure 2). 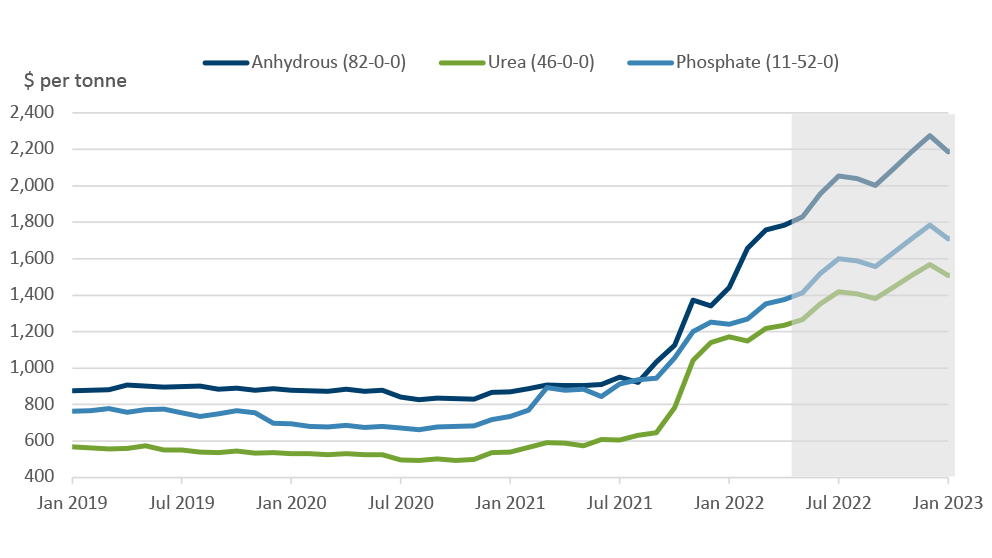 Fertilizer affordability, calculated by the price of fertilizer divided by the crop price, has recently deteriorated. The higher the ratio, the less affordable fertilizer becomes relative to crop revenue. The ratios for wheat, canola and corn are near their respective long-run averages and are expected to increase slightly for the remainder of the year (Figure 3). If correct, this would put the ratios in line with where they were between 2014 and 2015.

Figure 3: Fertilizer-price ratios are at or below historical averages, but could go higher 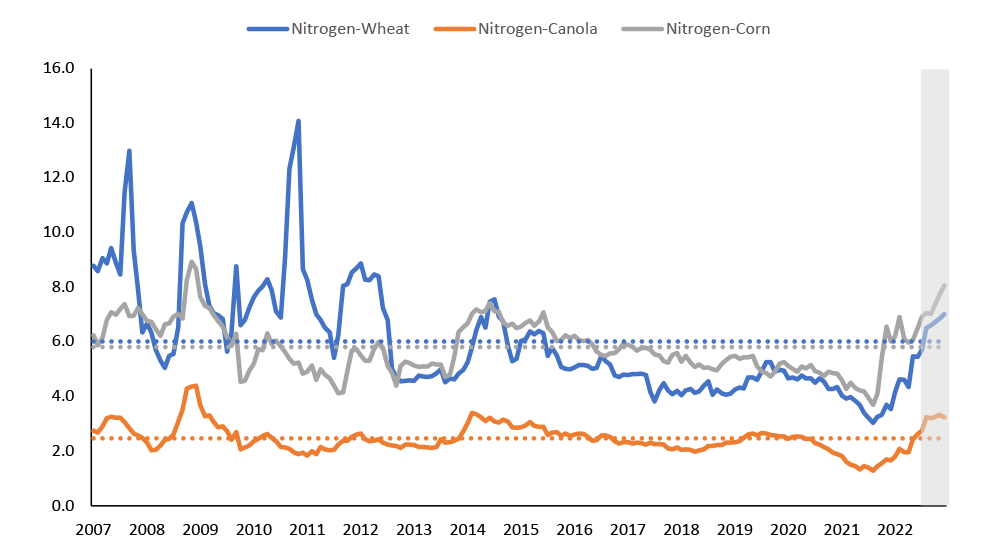 Soil moisture will be key this year following the 2021 drought. Drought conditions have improved since the fall, but large areas in the Prairies remain under severe or extreme drought. The situation has improved in Manitoba and most of Eastern Saskatchewan, while it is still dire in Southwestern Saskatchewan and Southeastern Alberta. Assuming trend yields, crops will be profitable in the next marketing year (Figure 4), and there is room to accommodate lower yields and maintaining profitability. We find that it takes about a 15% yield reduction for profits per acre for spring wheat to be negative. 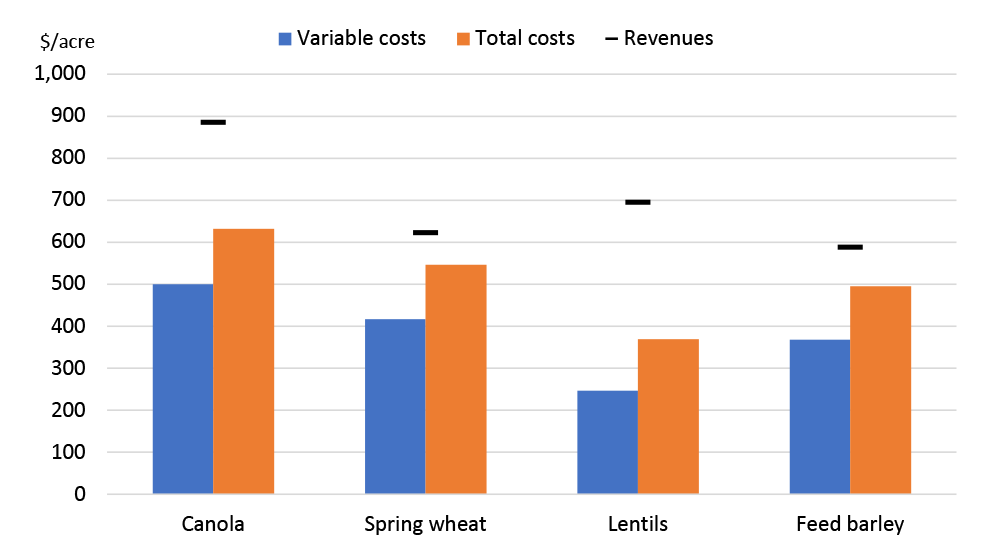 In Eastern Canada, moisture is plentiful in most areas, but the cold and wet spring is keeping tractors off the fields and slowing down work. There is ample time to catch up, however. We expect strong profitability for Eastern crops under normal growing conditions. We are keeping an eye on fertilizer and pesticide prices and the availability of these inputs, which could be an issue for some farms. 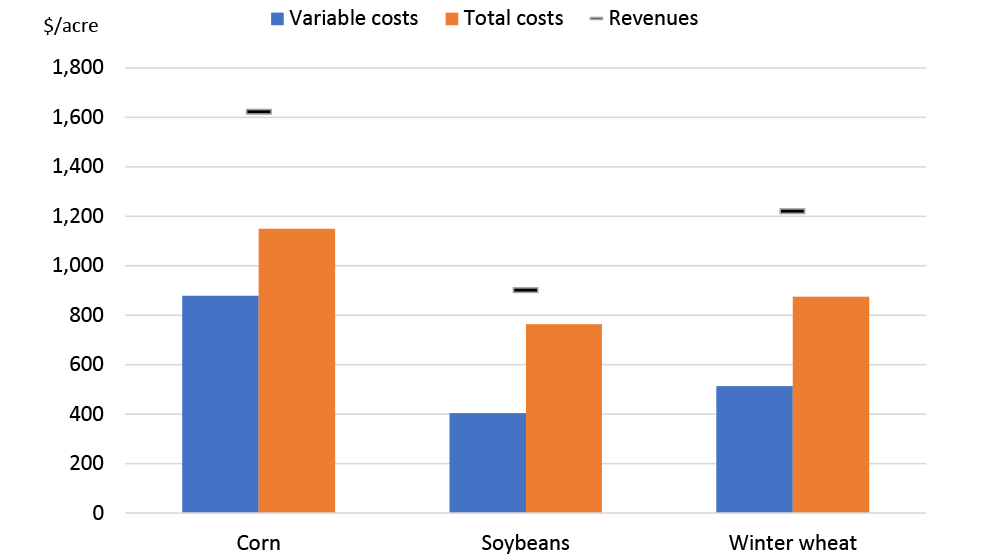 What to expect going forward

Forecasting when and how the war will end is nearly impossible, but the longer it continues, the more global trading patterns will shift. New challenges — and opportunities — will emerge. Managing expenses, including input prices and debt servicing costs in the context of rising interest rates, will allow the ag industry to take advantage of these emerging opportunities. Global stock-to-use ratios were stable prior to the invasion, but the disruption the war created will test supplies in 2022-23. Canada is positioned to play an important role in meeting global demand for wheat, canola, and barley, assuming the drought subsides. Indeed, the most important variable in the short-term in how the 2022 growing season will unfold is the weather, particularly moisture levels in the prairies.

Graeme joined FCC in 2013 and has worked in a variety of roles in risk management within the organization. He joined the Economics team in 2021, specializing in the development and maintenance of risk analysis models and economic forecasting. Graeme grew up on a dairy farm in Saskatchewan, holds a Master of Science degree in financial economics from Cardiff University and is a CFA charterholder.