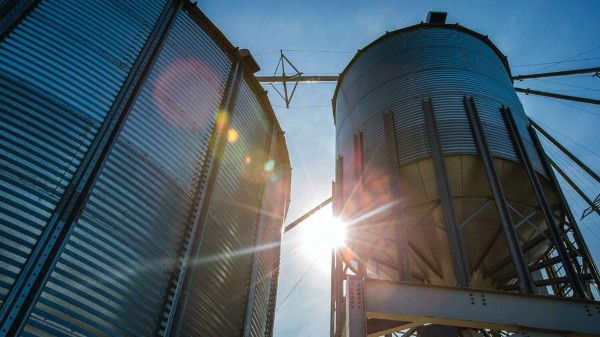 This is the second of three quarterly updates to our 2022 Outlook for major crops published in January. Over the next three weeks, we’ll update the Outlooks for dairy and cattle and hogs.

Prices for Canada’s 22-23 crops have improved relative to our last outlook. With markets focused on accessing Ukrainian and Russian grains, boosted prices for 22-23 marketing year (MY) crops will offset challenging planting conditions in Canada and the U.S. Most commodities for 22-23 have lower year-over-year (YoY) prices, but they’re still well above their 5-year averages and are projected to remain there over the coming months (Table 1). 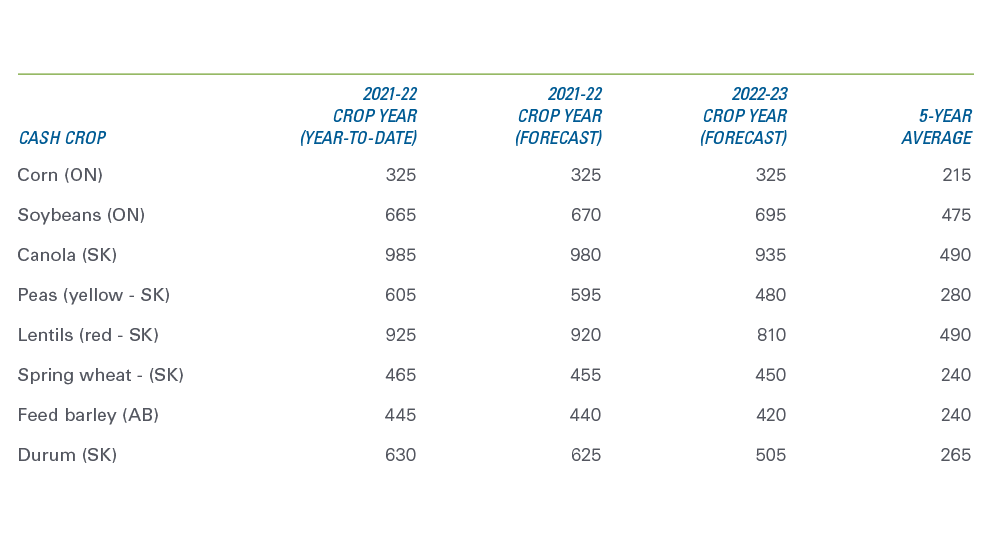 The Russian invasion of Ukraine plunged global grain markets into chaos, led by wheat and corn. In May, wheat futures were up 61% year-to-date (YTD), but market weakness led by recession fears in early July and large Russian and Australian wheat crops resulted in these gains falling to only be up 9% YTD (Figure 1). Corn futures’ sharp run-up was similarly reduced over the same period.

Oilseed futures also had big spring price rallies before settling down after seeding. Canola futures reached a 2022 peak in April at $1,195/tonne before tumbling 35% by July, trading 18% below January 1 prices. July soybean futures are 5% above January 1 prices after falling from their spring highs. 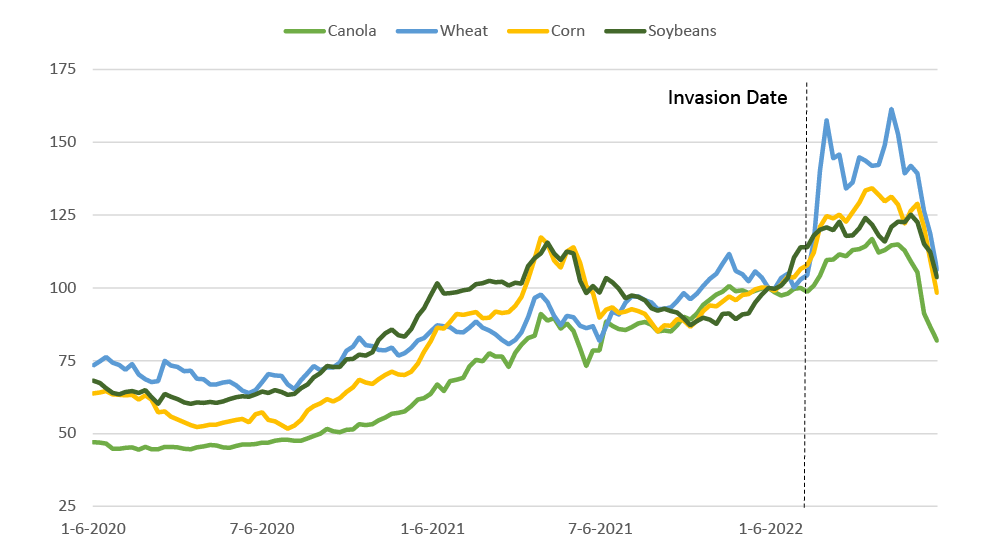 Despite some recent weakness, prices for canola, wheat, corn, and soybeans were still up YoY at the start of July. While the volatility experienced to start 2022 is significant, the four commodities are historically high heading into the new crop harvest, all of which are up at least 35% compared to July 2020.

Although Ukrainian grain production is expected to fall 38%, exports are forecast to drop by a greater margin. The inability to move grain out of the country means there will likely be a grain stocks build-up: 2022/23 ending stocks are projected to be 20 million tonnes larger than their pre-war levels. These stocks would be a price threat to global commodity markets, potentially for years, should they not be released soon. North American production may help fill some of these export gaps.

Accessing Ukrainian grain is challenging, with major Black Sea ports blocked or damaged. Current efforts to move grain by truck and rail will not be enough to replace the efficiencies of large, modern ports. As a result, Ukraine’s exports of barley, corn and wheat will be down 51% in 2022/23 MY, according to the USDA (Figure 2). 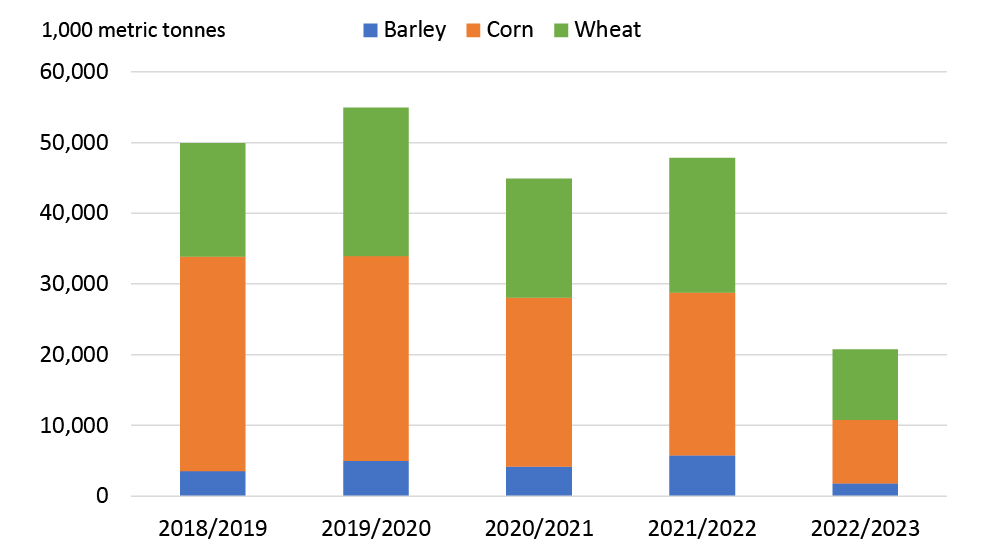 Since May’s update, prairie farmers have dealt with significant weather challenges. The Eastern prairies have had excess rainfall, slowing seeding and leaving some acres fallow. Western Saskatchewan’s dryness has continued, which may limit yield potential. In contrast, Alberta received above-average rains in June, which has improved its outlook. For farms able to achieve trend yields, profitability for the 2022-23 crop looks excellent (Figure 3). Canola, spring wheat, and lentil profitability in Western Canada have all increased since the last update due to increased revenue potential from strong crop prices outpacing input price increases. Higher fertilizer prices are driving the higher variable costs. 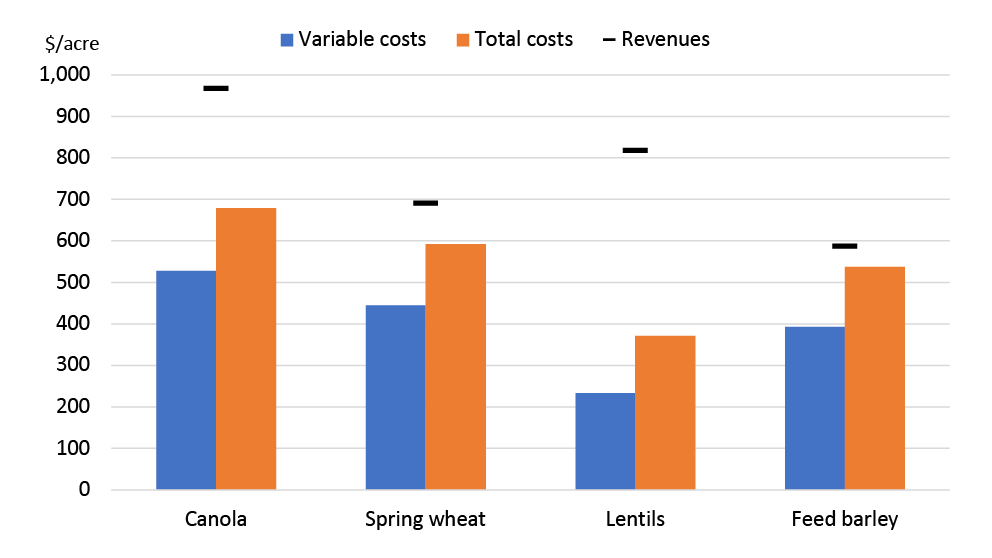 In Eastern Canada, a nice-looking winter wheat crop is being harvested in July. Margins are expected to be strong; however, they have declined since the previous update (Figure 4). The decline is mostly due to declines in wheat prices, and input prices (i.e., fertilizer prices) also impacted the 3 major eastern crops. Corn and soybean margins remain favourable assuming trend yields, but widespread rains would be beneficial. 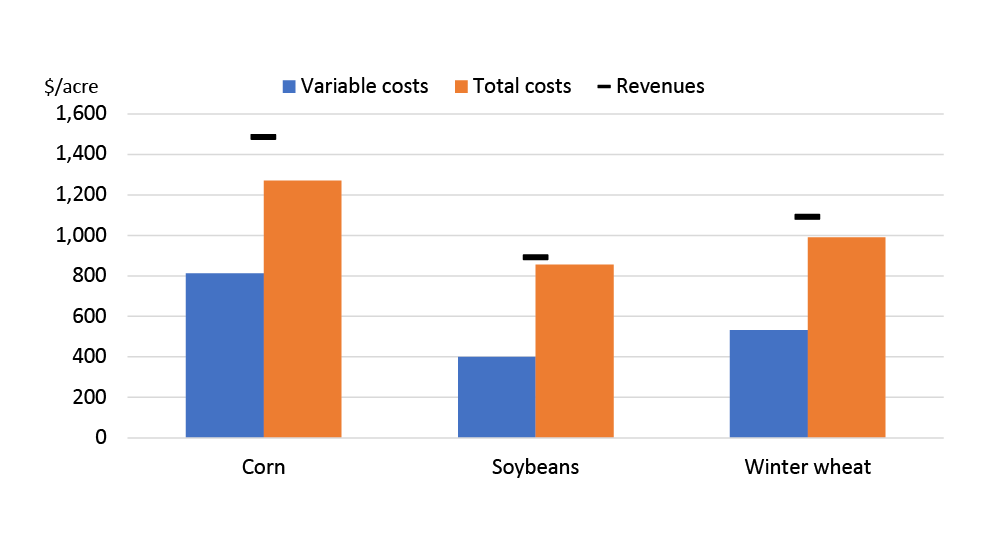 What to expect going forward

Significant global tensions and inflation have created volatility in the first half of 2022 for farmers and consumers alike. Global supplies will depend on North American growing conditions and Ukrainian port access.  Whether Ukrainian grain gets to world markets is a huge risk factor heading into fall, and Canadian grain will continue to be in demand from the world and domestic markets. Farmers must continue managing input expenses and taking advantage of price rallies for good price risk management.

Justin joined the FCC Economics team in 2021, specializing in monitoring agricultural production and analyzing global supply and demand trends. He grew up on a mixed farm in Saskatchewan and continues to be active in the family operation. Justin holds a Master of Applied Economics and Management from Cornell University and a Bachelor in Agribusiness from the University of Saskatchewan.