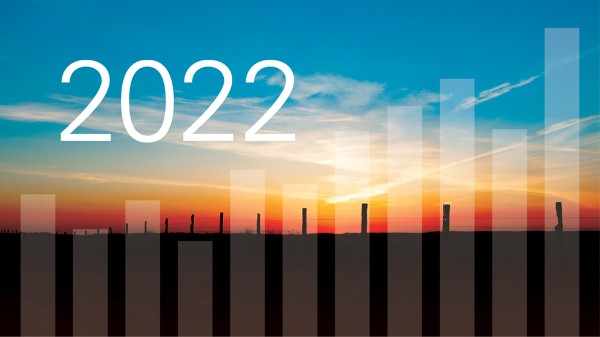 The ever-optimistic among us hoped we’d seen the worst COVID impacts. If that were true, a moderation in demand would help to lower inflationary pressures without invoking dramatic monetary intervention from the Bank of Canada (BoC). But with inflation at 5.1% to start the year and the omicron wave underway, it wasn’t clear if that would amount to anything more than wishful thinking.

COVID had unleashed a storm of demand on global markets that had become increasingly costly to supply. As elsewhere, experts believed Canadian rate hikes would happen in 2022, moving the overnight interest rate (OIR) from the then-current 0.25% to end the year at 1.5%. With such hikes, expectations were that inflation would fall to around 3% by December. The economy was humming, doing better than expected, with strong forecasted growth.

There were, however, signs of the forces that would soon dominate headlines. Canadian agrifood producers were getting high commodity prices, realized from the ongoing strength of global demand and leading some to wonder if those prices laid at the root of global food inflation. China was cutting back its outsized influence that had dominated the 2020-21 global agri-food trade, and overall Canadian pork exports were down year-over-year (YoY) as a result. Hog slaughter capacity in eastern Canada had been reduced in response to packers’ COVID-related slowdowns in 2020 and 2021, creating a historically high backlog of hogs in Quebec.

But all that took a back seat with growing reports of Russia amassing troops at Ukraine’s borders.

Canada’s job market was strong, with the unemployment rate dropping to 5.5.%, slightly lower than its February 2020 pre-pandemic level. With the omicron restrictions, employment had fallen by 200,000 jobs in January but bounced back with 337,000 jobs in February. Production headwinds had nonetheless appeared in several of Canada’s livestock sectors.

Hog slaughters in Quebec and Ontario were destined to be cut further, putting additional strain on the pace of slaughter needed to clear the backlog noted in January. And Avian Influenza was reported in the eastern region of the U.S. and Canada. Twelve thousand turkeys were culled in Nova Scotia.

Then, the world watched in horror on February 24 as Russia advanced into Ukraine. Forecasters warned that should the two countries’ ag and oil production or exports fall due to the war, world prices would rise again. Futures for corn, soybeans, canola and wheat rose significantly that week, some even hitting their daily upper limit. It didn’t bode well for those worried about inflation.

Although GDP data showed that the Canadian economy grew in the first quarter at a 3.1% annualized rate, things were slowing down. April’s growth was expected to slow from the previous months. But that news took a back seat to more worrying reports.

Overall inflation was 6.8%, and food inflation had climbed 8.8% YoY. In ag markets, wheat was above US$11/bushel. The price of corn reached the US$8/bushel mark in Chicago for the first time since 2012. That didn’t help markets’ concern that high inflation expectations were becoming ingrained – and possibly the source of future inflation growth.

Avian influenza was spreading unchecked, with 700,000 birds euthanized to date and the end, not in sight. The outbreak hit Alberta hardest.

Another effect of the war? Investors were turning to the U.S. dollar as a haven in uncertain times and boosting its value relative to the CAD.

It was sinking in Canada-wide that our fears were gaining life. The month’s inflation rate was 7.7%, the highest in nearly four decades.

But it didn’t stop there: More global supply shocks raised food prices. The Russia-Ukraine war was pushing up prices. With forecasts of tighter stocks-to-use ratios for major commodities, Indonesia and India limited or banned exports of key agri-food commodities to secure their domestic supplies. Commodity prices soared. Markets made nervous by tight stocks meant such volatility would continue.

At home, the BoC was making decisions few had foreseen. Hiking the rate by 0.5% for the second consecutive month (to 1.5%), they noted more hikes would be needed at the upcoming July 13 meeting. The year-ending OIR was expected to be 3.00% or slightly higher.

Growth in production costs was at the heart of a move by the Canadian Dairy Commission, which announced an out-of-schedule 2.5% increase in the target for the farm-gate milk price. Even with the announcement, costs were forecasted to outpace farm-gate prices.

Amid that market volatility, another crop cycle was underway. Spring seeding was all but finished in the East, where fields were reported to be in good shape. Various parts of the Prairies suffered from too much moisture, where planting progress lagged the 5-year average considerably. There was some good news though: fertilizer prices were softening as urea futures were down 43% in mid-June compared to the end of March and were expected to decline further throughout the summer.

Russia and Ukraine struck a deal to allow shipments to leave Ukraine ports. It appeared that crop prices had peaked as uncertainty faded about the geopolitical conflict and more news of the 2022-23 marketing year (MY) crops was available. With Canadian seeding finished, StatsCan estimated fewer canola and soybean acres in favour of wheat, corn, and oats.

The long arm of COVID was receding in some livestock markets. Canada’s poultry producers recorded increased production due to three factors: a recovery from the COVID-led demand slowdown; chicken was a favourable purchase point relative to other meats; and a slowdown in imports from the U.S.

Q2 GDP numbers showed that the Canadian economy grew at an annualized rate of 3.3%, higher than Q1 (3.1%). Nonetheless, Canadian retail sales were down 2.5% from June to July, mostly driven by lower gasoline sales. Despite this slowdown in retail sales, the BoC delivered a super-sized rate increase of 100 bps.

New OECD projections to 2031-32 supported suspicions that crop prices had peaked in the 2021-22 MY. They were expected to stabilize within the 2022-23 MY, although at higher levels than before the pandemic. While increased costs of production would keep them elevated, they were able to retreat from the highs of 2021-22, pressured lower by slightly improving stocks-to-use ratios and the resolution of some of the worst logistics bottlenecks that arose during COVID.

With the latest CPI data showing inflation at 7.6% YoY in July, it had become clear that inflation was going to be that unwelcome guest who wouldn’t leave. Prices were expected to continue increasing, although at a slower pace than in the last 12 months.

Hurricane Fiona landed on the east coast on September 24. The storm was the strongest hurricane and one of the wettest ever recorded in Canada. Massive damage was sustained across sectors, including dairy, potatoes, corn, greenhouses and fisheries.

Statistics Canada production estimates showed that the corn crop would be the largest in history. That boded well for Eastern Canadian producers, given that recent global production estimates and news involving Russia were bullish. France’s drought-reduced 32-year low in corn production was worsened by newly downward-revised expectations for Ukraine’s corn production. The USDA projected overall declines in the EU’s production of wheat and corn as well. And Russian natural gas exports were so limited to Europe that by mid-month, 70% of European nitrogen fertilizer plants were completely closed. Headlines suggested Russia’s agreement with Ukraine (to export grain through the Black Sea) was in jeopardy.

Avian influenza re-emerged in Eastern Canada with the first case in four months. It was worse in the West. The disease had impacted 1.1 million birds in Alberta alone by September 27. More than 2.5 million birds had been disposed of across Canada.

Transportation challenges were top-of-mind in Canada and south of the border as the possibility of a U.S. rail strike loomed and water levels fell in the Mississippi River - where 92% of U.S. ag exports pass. With transport costs soaring, Canadian producers were facing a dual-edged sword. The forecast of little rainfall for the river basin could mean a boost in Canadian crop exports, but input prices for Canadian farms and businesses could increase if the slowdowns weren’t resolved.

The BoC hiked the overnight rate by 50 bps, but in anticipation of a 75 bps increase in the U.S. federal funds rate, the Canadian dollar continued to fall against the greenback. By October, it had lost 10% against the USD on the year, making U.S. imports increasingly more expensive.

The year was perhaps best characterized as one of extreme price volatility, and it was back in the news. On October 29, Russia suspended the grain movement deal with Ukraine, resulting in swift commodity price increases. However, within several days, Russia re-entered the deal, and futures dropped. On November 17, the deal was extended for four months.

The federal government unveiled the details of a $1.7 billion package to compensate the supply-managed sectors resulting from the impacts of the Canada-United States-Mexico Agreement (CUSMA), with payments starting in early 2024.

Price volatility in agricultural commodities has calmed as winter has approached. That means prices could be more stable through to spring. At home, there was good news for farm revenues. Crop receipts were up 7.3% in the first nine months of this year relative to 2021. And with a much better 2022 crop in the Prairies, receipts will climb much higher in Q4. Although livestock receipts increased 11.6% over the first nine months, the positive trend in gross income was muted by the large input cost increases recorded throughout the year. The BoC lifted its overnight rate to 4.25%, but we think borrowing costs overall are about to plateau for most of 2023 and that overall farm input inflation should moderate considerably.

This is a reminder that we’ll be taking a break from bringing you insights until the week of January 10, when we’ll outline the top charts you should monitor in 2023.

From all of us at FCC Economics, we wish you the best of the season and a Happy New Year!