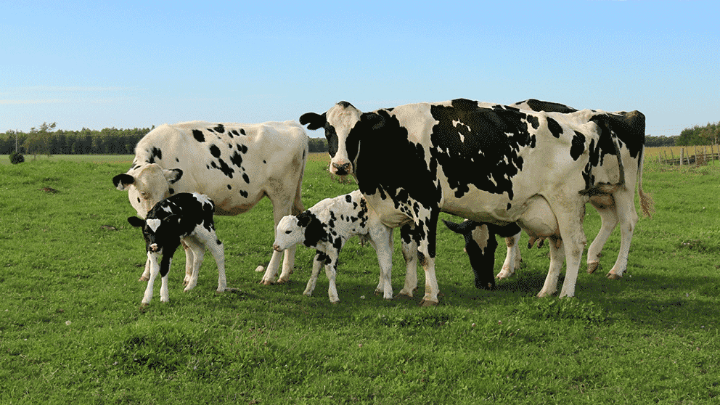 This is the second of three quarterly updates to our 2022 Outlook for Canada’s Dairy Sector  published in January. Last week we updated our Grains, Oilseeds, and Pulses Outlook, and next week we’ll update the outlooks for cattle and hogs.

Inflation continues to put pressure on dairy profitability. Energy and feed prices seem to have peaked - but both remain near historical highs. With high inflation expected to continue, the Bank of Canada (BoC) raised its policy rate by 1%, increasing the cost of capital for farmers. After consultations with stakeholders, the Canadian Dairy Commission (CDC) announced a 2.5% increase in the farmgate milk price, effective on September 1, to partially offset the impacts of inflation. This price adjustment will be deducted from the next price adjustment scheduled for February 1, 2023.

Table 1 summarizes revenue and cost data for 2020 and 2021 and our latest forecasts for 2022. From our May outlook update, we revised gross revenues upward for P5 and WMP farmers. We increased our 2022 feed costs forecast for P5 farmers but slightly lowered it for WMP farmers. Note that the feed cost estimates are opportunity costs, meaning that farms able to grow their own feed can do so at a lower cost. 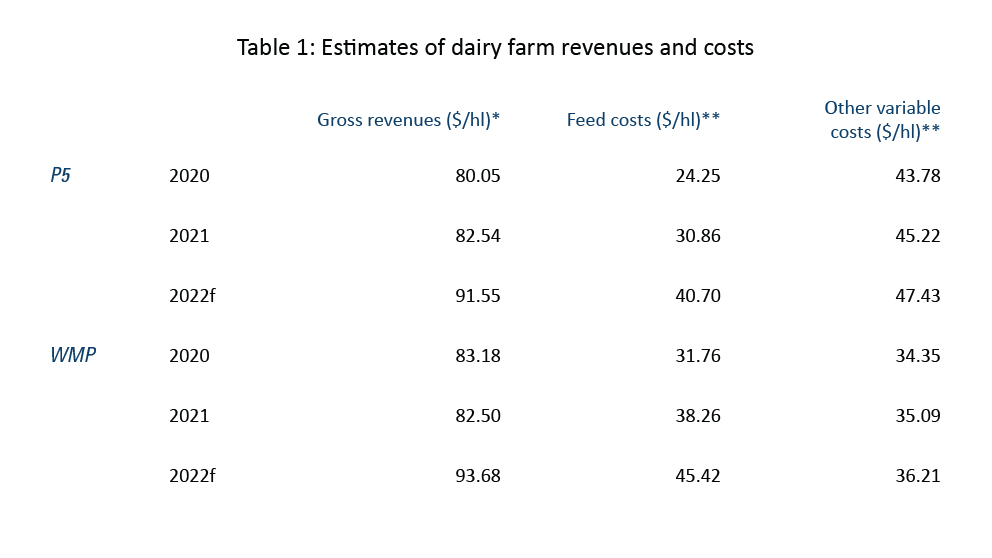 Sources: Calculations by FCC based on cost of production estimates from the Canadian Dairy Commission and Government of Alberta and data from the Dairy Farmers of Ontario, Les Producteurs de Lait du Quebec, Alberta Milk, Statistics Canada and USDA.
*Gross revenues are based on data reported by producer groups, which differ from Statistics Canada data used in calculating dairy receipts.
**The calculations use different definitions of cost categories for the P5 and WMP and, therefore, values are not directly comparable.

Butter stocks are low relative to previous years. From 2018 to 2021, the stocks-to-use ratio for creamery butter declined from 3.65 to 2.17. For the first four months of 2022, the ratio was 1.60, a level not seen since early 2017. We will continue monitoring butter stocks and see whether imports (see below) or domestic production will bring the stocks-to-use ratio up toward its five-year average of 2.80.

Feed prices have eased from their peak. We've lowered our forecasts for grain prices compared to our earlier projections, but they remain well above their five-year average.

Although large areas in the Prairies are under moderate or severe drought, conditions have significantly improved according to the Canadian Drought Monitor. Recent Alberta crop reports show that the quality of pasture and tame hay have improved compared to last year but are still below their long-term averages. Western producers are expected to reduce feed imports, lowering production costs. In British Columbia, a wet and cold spring has meant reduced feed production. In Eastern Canada, the outlook is still positive for another good hay harvest.

Recent data show that prices for gasoline and diesel have begun to decline since peaking in June. Predicting the price of oil is a risky business, but signs are pointing to a decline in oil prices due to increased production and slower consumption growth.

Following the February farmgate price hike, the price of butter increased the most at retail. From the June inflation data, the price of butter increased by 17.5%, compared to 7.9% for cheese, 8.0% for fresh milk and 8.7% for dairy products in general. This is not too surprising because after CUSMA, the lever the Canada Dairy Commission can use to increase the price at the farm is the support price of butter. For other dairy products, prices have been increasing more gradually as the prices for components other than butterfat depend on prices in the United States and in the rest of the world.

Inflation of world prices for skimmed milk (or nonfat dry milk) is also high and has helped balance the relative prices of milk components and supported the farmgate price. Between June of 2021 and 2022, the U.S. price for nonfat dry milk increased by 42.5%. In Canada over the same period, this caused the price of class 4(a) for non-fat solids to increase by 68%. Inflation in other milk classes has been high from a historical perspective but much lower than in class 4(a).

Given inflation, how well is the demand for dairy products holding up? It's difficult to make definitive statements about the strength of demand because year-over-year (YoY) comparisons are not informative due to pandemic disruptions. Moreover, the demand for dairy is getting tested by high inflation for the first time in several years, and we are uncertain how consumers will shift consumption toward new products. Nielsen data for retail sales show that dairy volumes declined 7.8% in May 2022 compared to May 2021, with a 5.4% inflation rate over that period. The consumption decline could be partially attributable to increased consumption in food services and not reflect a shift down in the demand for dairy products. Consumption data for dairy alternatives suggest that it is the case. Like dairy products, volumes of dairy alternatives declined 6.0% YoY while their price increased by 2%.

The value of Canadian imports of dairy products has continued to grow, but this largely reflects price inflation. Compared to the first five months of last year, import volumes for milk and cream (HS codes 0401 and 0402) have declined, but have increased for buttermilk, whey, butter and cheese (HS codes 0403 to 0406).

The Canada-U.S.-Mexico Agreement (CUSMA) has been with us for two years. Under the agreement, import quotas for U.S. dairy products are set to increase annually. In Figure 1, filled rates are lower for products with a marketing year coinciding with the calendar year because we are just past mid-year. We are about to complete the second full year of the agreement for products with a marketing year from August to July. By the end of July, the import quota for butter should be nearly filled. This is not surprising given that this product has the highest fill rate given the low stocks-to-use ratio for butter. Filled rates for milk and cream will exceed 50% but should not approach 100%. 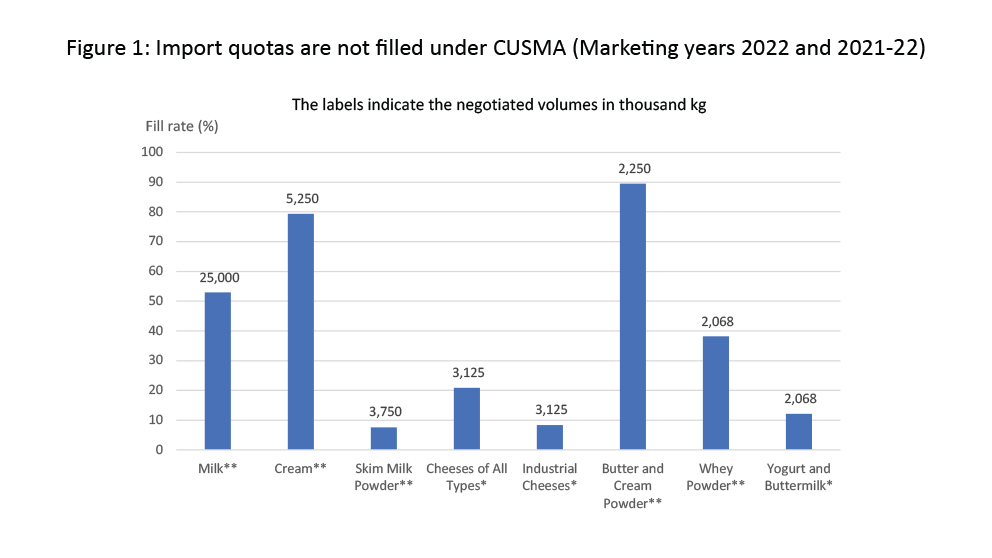 Inflation hit 7.7% in June. The BoC increased the overnight interest rate (OIR) by 1% on June 13, noting in its announcement that it expects inflation to stay high for the rest of 2022. The BoC has increased the OIR by 2.25% so far this year. We can expect the BoC will increase the OIR by another 0.5 to 1.0% before the end of the year. For more information on the macroeconomic environment, check out our Economic and Financial Market Update coming out on September 8.

Check back on our blog for a regular update of the 2022 dairy outlook and outlooks on the grain and oilseed, hog/cattle, broiler, and food processing sectors.