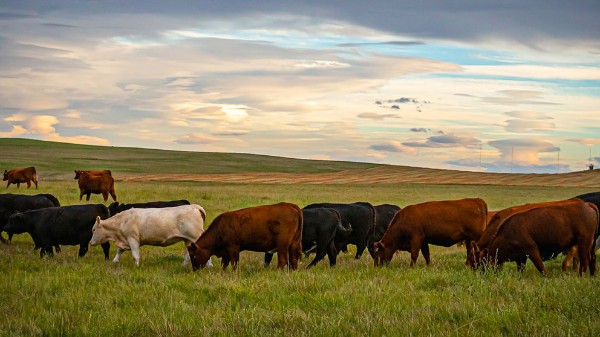 FCC Economics helps you make sense of the top economic trends and issues likely to affect your operation in 2022.

Watch a recording of the 2022 FCC Ag Economic Outlook that reviews the major drivers and trends to look for in the year ahead.

The three major trends to monitor for cattle and hog operations include:

It will be another year of split margins in the cattle sector – positive for cow-calf and pressured for feedlots. Prices will rise year-over-year (YoY) and be better than their respective five-year averages (Table 1). But, continued growth in feed costs has taken — and will continue to take — a big bite out of profitability.

Table 1: Livestock prices ($/cwt) are expected to improve YoY and to exceed the 5-year average 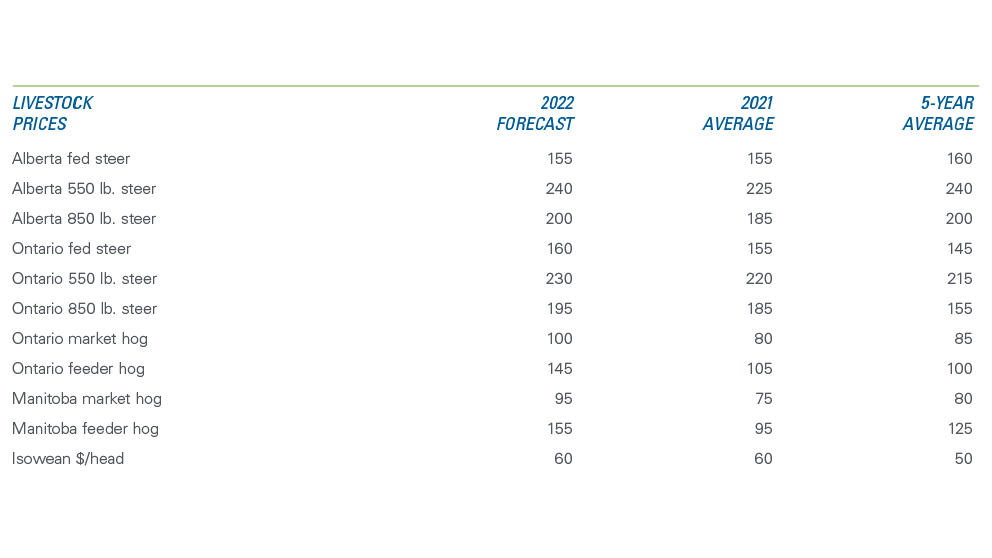 Average hog prices should be higher in 2022, both YoY and relative to their five-year averages, and that will help produce positive margins for isowean operations. But it will also be a year that farrow-to-finish operations in the East will benefit more from a relative feed cost advantage than those in the West, where some profitability challenges may be present.

At the end of last year, higher cattle placement led to a strong supply of fed cattle in early 2022. But high feed costs mean fed cattle will be marketed at lower weights, leading us to forecast Canadian cattle production at 6.4 billion lbs. in 2022, a 2.5% YoY loss. That, along with lower beginning stocks, has dampened the forecast for exports in 2022.

1. The legacy of ASF and China’s efforts to rebuild its hog herd

In 2022, China’s hog production is forecast to grow YoY, and pork production will grow 5%, the second year in a row it’s risen (Figure 1) after low prices and disease outbreaks led to higher YoY slaughter in 2021. Pork imports will decline as domestic pork production is expected to help total meat supplies reach pre-ASF levels but remain elevated beyond historical levels. In 2021, they fell 16.7% from the sharp high seen in 2020, and they’re expected to fall a further 4.5% in 2022. Year-over-year growth in beef imports is expected to continue for the second year in a row, with the USDA forecasting 10.2% growth in 2022 after 65.5% growth in 2021. 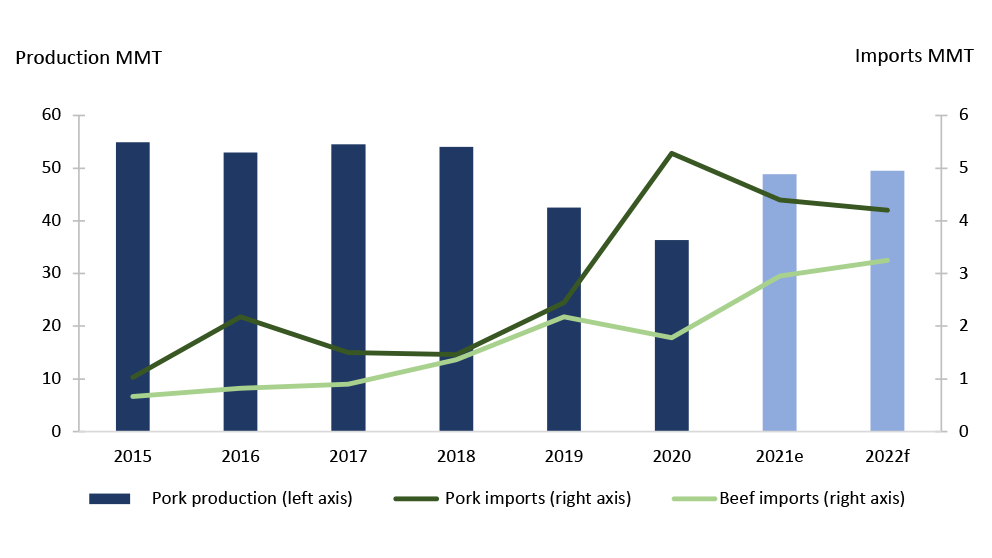 According to some commentators, China has struggled to produce its planned meat output for several years now. Some Chinese estimates suggest that by following their current five-year livestock plan, Chinese producers will regain the output of 2014 only by 2025, primarily by recapturing the pork production lost to ASF. The national plan calls for increased self-sufficiency in livestock and meat production, a questionable goal given the country’s available land and clean water supplies.

China’s pork production may be stalled for the short term as disease continues to take a toll and the sow herd continues to rebuild, implying opportunities for Canadian exporters. Chinese imports of Canadian pork exploded in 2020 (Figure 2). They then fell 54.9% YoY in 2021 while remaining 65.7% above the previous five-year average. It’s the same story for Japan, where lower YoY exports were still 16.9% above their five-year average. Exports to our other principal import markets gained in 2020 and continued to grow in 2021. That suggests global pork demand remains elevated and can be expected to support price growth soon.

Figure 2: Growth in 2021 Canadian pork exports to U.S. and others help offset lower exports to China 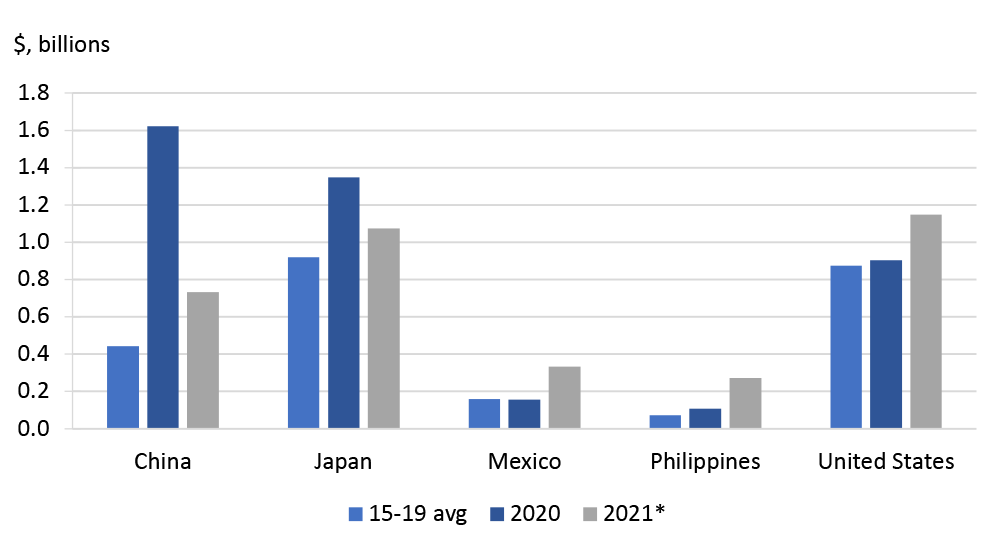 2. Feed availability and prices in Canada

While feed costs remain well above their five-year averages in Eastern and Western Canada in 2022, they should drop YoY (Table 2).

As prices for livestock rise and feed costs decline, the livestock-to-feed ratios in Canada’s east and west are expected to improve moderately. For cattle, the improvement in prices expected in 2022 won’t be enough to offset the steep increase in feed costs seen in 2020 and 2021, despite a levelling of feed price increases in 2022. The price-to-feed ratio is projected to be flat and at lower levels than the last two years (Figure 3). 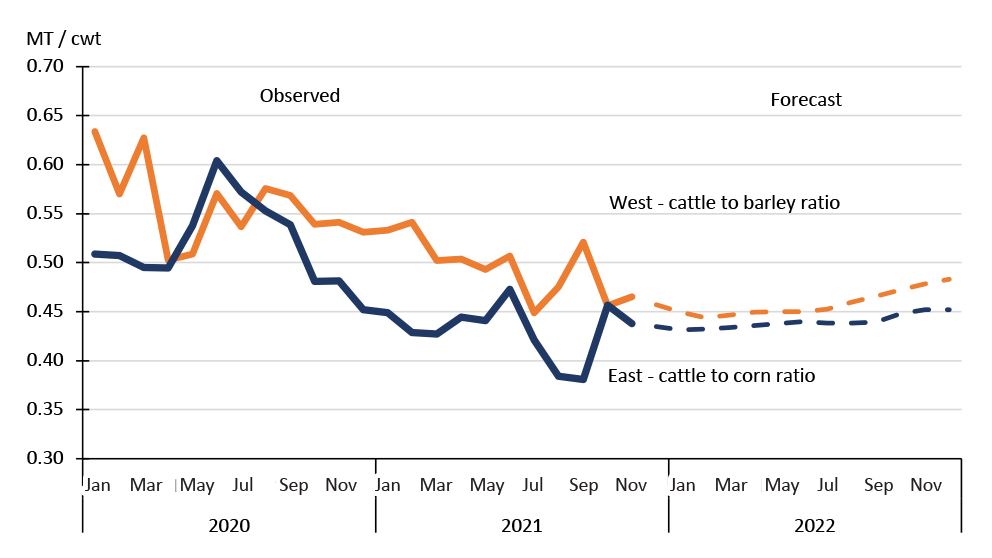 Between 2015 and 2019, the annual average Canadian consumption growth for the two red meats averaged -1.0% for pork and 1.0% for beef. In 2020, YoY pork domestic availability fell while beef remained steady.

Preliminary estimates suggested declining Canadian beef consumption in 2021, but that may prove to be a unique aberration that will reverse in 2022. Domestic consumption had been slowly climbing for five previous years and stabilized in 2020. Pork consumption declined 10% YoY in 2016, pulling down the five-year average, then it quickly gained ground between 2017 and 2020. But the first year of the pandemic was extraordinary in terms of the sudden fall in pork consumption - and whatever decline in 2021’s red meat consumption is realized may paint an even bleaker picture.

It may not be as bleak as it seems, however. The falling consumption can be explained by dips in household income while meat prices rose, foodservice shutdowns and two years of huge boosts to Canadian red meat exports.

Retail inflation in December stood at 11.9% and 8.4% YoY for beef and pork, a higher figure than other animal proteins such as chicken (6.2%), eggs (3.8%) and dairy (3.0%). We should see less inflation over the next few months as various supply chain issues are sorted out. But prices for red meats are likely to stabilize at high levels given higher costs across the entire supply chain and strong domestic and global demand.

Check back for a 2022 cattle and hog outlook update and for outlooks on grain, oilseed, pulse, dairy, and food processing sectors. An in-depth analysis of interest rates, currencies and GDP will be released in early March.