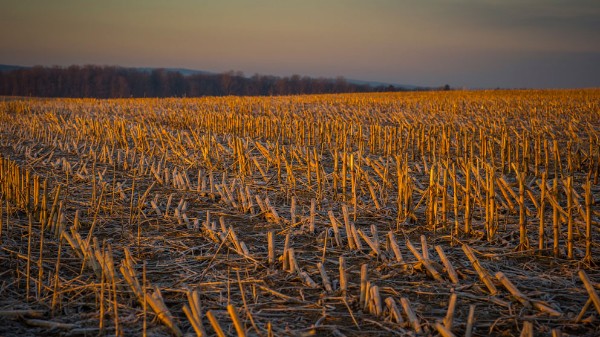 Farmland values reached an all-time high across the country in 2021, driven by strong commodity prices and low interest rates. A favourable commodity price outlook in 2022 suggest that the demand to purchase farmland might not weaken even in a higher interest rate environment.  Renting land can be an alternative for producers to reach their desired scale of operation and mitigate financial risk. The analysis below provides an overview of cash rental rates in selected provinces by leveraging the set of farmland benchmarks of our FCC farmland value report.

We collect cash rental rates in each province for specific farmland benchmarks. We focus on a Rent-to-Price (RP) ratio to minimize the variability reported in cash rental rates observed within regions. The reported RP ratio is the cash rental rate per acre (based on the gross rent price generated by the land) relative to the value of farmland per acre.

A higher average price of farmland will result in a lower RP ratio even if the rental rates do not adjust upward proportionally. The weighted average RP ratio of Canadian cultivated land is 2.50%, which represent a decrease of 0.2% vs last year. 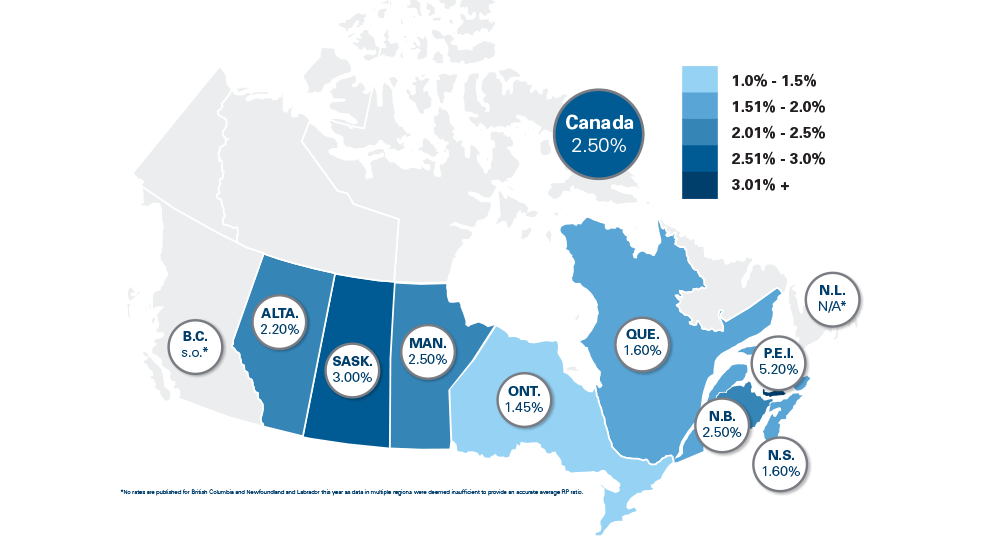 Numerous factors influence the per acre rent for land: interest rates, farm revenues, duration of the agreement, type of agreement, quality of land, environmental considerations, availability of cultivated land to rent to name a few. These can vary a lot in some areas where demand for certain types of land is robust and supply is limited. There is considerable fluctuation in each province’s cash rental rates and land values (Table 1). The high-end RP ratio is usually for land that is the lowest value per acre in the province. And the lower end of the RP ratio is conversely associated with land of higher values per acre. 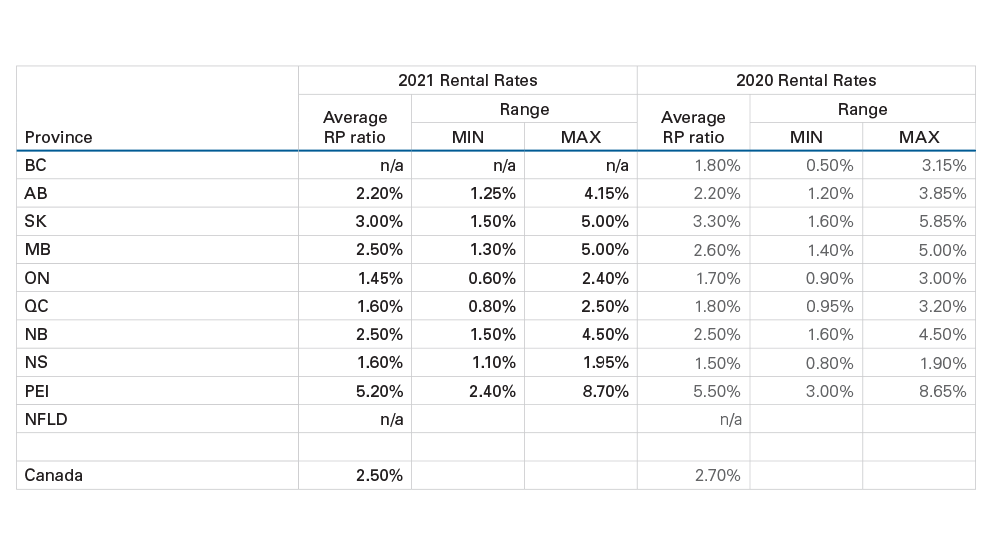 Average RP ratios are the same as last year in Alberta and New Brunswick, coinciding with the smallest changes observed in the average farmland values amongst all provinces.

The average RP ratio in Saskatchewan was 3.30% in 2020 and is now 3.00% in 2021. Most areas in the province recorded stable rental rates this year, albeit with some exceptions, which led to a lower RP ratio given the increase in farmland values overall. Similar observations can be made for Manitoba, Quebec and Nova Scotia.

In Prince Edward Island, the average RP ratio was 5.50% in 2020 vs 5.20% in 2021. The range of RP ratio observed in PEI is larger than in other provinces. Revenue from specialty crops, like potatoes, are generally higher than revenue for grains and oilseeds on a per acre basis. This creates upward pressure on rental rates. Also, land suitable for these specialty crops is often not as available for rent as other land that can accommodate cash crops.

No rates are published for British Columbia this year as data in multiple regions were deemed insufficient to provide an accurate average RP ratio.

There exists a correlation between land prices, rental rates, and farm revenues. Movements in any of these indicators can lag however any of the two other indicators. In the current environment land prices are elevated and the outlook for farm income is positive given strong commodity prices. In the long run, they tend to move together and any deviation from their long-run equilibrium can be a sign of further adjustments to come in the farmland market.

A discussion of the different land rental agreement options available will be provided next week.