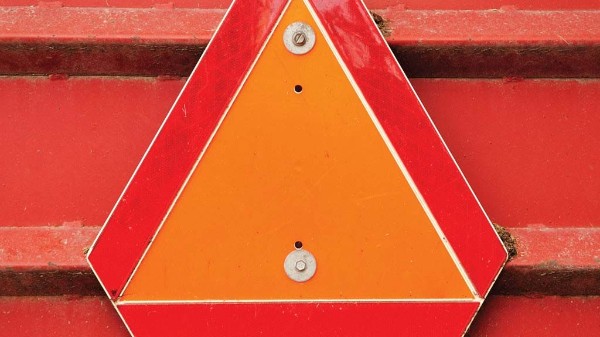 Since driving is a provincial jurisdiction in Canada, no two jurisdictions have the same rules when it comes to moving farm equipment on public roads. But to hear safety expert Raynald Marchand tell it, courtesy and good judgment are two common denominators for every region of the country.

“Car and truck drivers must realize these vehicles are on the road for a reason, which is to put food on our tables,” says Marchand, general manager of programs for the Canada Safety Council. “But operators have an obligation to ensure they are moving in a safe and legal manner on public roadways.”

Operators have an obligation to ensure they are moving in a safe and legal manner on public roadways.

Though regulations differ between provinces, Marchand says all have rules governing everything from the licensing requirements of machinery and drivers to speed limits and hours of operation of slow-moving vehicles like farm equipment.

Tips for taking your tractor in traffic

In regards to visibility, for example, the use of a triangular red-and-orange slow-moving vehicle (SMV) sign is mandatory on the rear of any towed equipment or machinery travelling 45 kilometres per hour or less, depending on the province.

“You need to be visible from 150 feet,” says Marchand. “And you need to do a walk-around to make sure your markers aren’t obstructed and aren’t worn out to the point where they no longer reflect.”

At least one rear red light and two front lights are also normally required if driving a half-hour before or after sunset, he adds, as are amber sidelights for vehicles six metres or more in length.

Marchand also emphasizes the need for two separate means of attachments when towing implements behind a tractor.

“In addition to safety chains, you should always use a drawbar or hitch or cable,” he says. “People fool themselves into a false sense of security when they say, ‘No worries, I’m just going down the road to the other field.’”

Whether towing equipment with a tractor or driving self-propelled machinery, Marchand recommends SMV drivers stick to their lane of the road. “Stay right of the centre line,” he says.

He warns operators against driving on the shoulders of roadways in the mistaken belief they are being courteous by letting cars and trucks pass.

“Sometimes the shoulder can’t sustain the load,” Marchand says. “And it isn’t illegal for drivers to cross solid lines to pass slow-moving vehicles if they do it safely. So leave that decision to them.”

From an AgriSuccess article (May/June 2016) by Mark Cardwell.