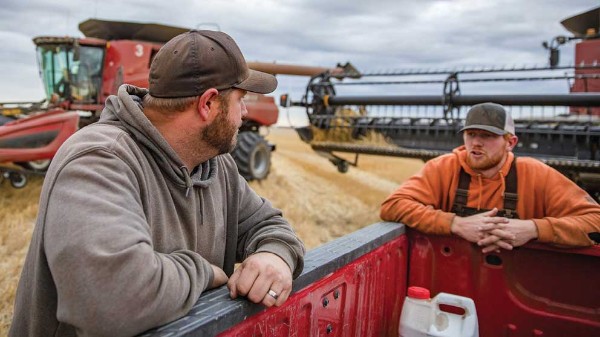 James and his brother Keith farmed together for more than 25 years after taking over and expanding the family grain operation.

In their early 50s, the brothers were hitting their stride and the business was positioned for further expansion. Both James and Keith had young adult children working part time on the farm, but there was no clear indication any of them wanted to take on farming full time.

A fork in the road came after a back injury James suffered while working in the shop. What they thought would be a quick recovery turned into surgery and a lengthy recovery period. It became apparent James wouldn’t be able to work at the pace and physicality he once enjoyed.

At first James suggested he would take on more administrative tasks, but sitting in the office was torture. He began to consider options and decided to study for his real estate license.

When James told Keith his plan, Keith was supportive but suggested they review the situation after six months. After only three, it was obvious it was not going to work. Tensions were rising. There were numerous arguments about his level of commitment to the farm. Finally, James said he wanted out.

They agreed to think it through for a week and then discuss how they might move forward. When they reconvened, both brothers brought a list of ideas.

After they laid their cards on the table, both James and Keith felt better about their decisions. The uncertainty hanging over them was addressed and while there was lots to figure out, they had a clear end result in mind. The goal would be to create a five-year transition plan.

An initial meeting with their accountant raised some significant red flags and provided a reality check.  First, the good news:

The brothers were asked to do some napkin math to estimate a value for the business and land – and the results were miles apart.

The joint tenant arrangement meant that if one brother died, the other would get title. A better scenario would be designation as tenants-in-common whereby if a brother dies, his share of the property would go to his heirs or estate. They had started the joint tenancy before either brother was married and had never revised it.

The accountant advised they would need a plan to address capital gains exposure, and laid out some simple steps and hard questions for them:

It was a sobering first meeting and they still didn’t have a plan for handling the land held as joint tenants. Both brothers had always thought they’d work together until they retired. There was goodwill on both sides, but with no roadmap to address James’s exit, they would have to work through the process step by step.

Marty Seymour talks with Garnet Martin, a senior partner at the end of his family’s farm transition journey, about lessons learned along the way.