What does a new high in farm debt mean for the ag sector? 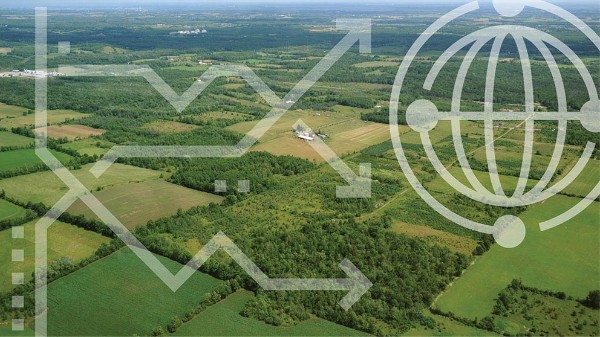 There’s no question the credit landscape is changing: there have been four interest rate hikes from the Bank of Canada since our 2017 assessment of farm assets and debt. Agricultural markets are also going through significant turbulence because of weather and trade tensions. Commodity prices have generally declined in 2018 and volatility has picked up. Within that uncertain economic and financial environment, Canadian total farm debt increased 6.6% from 2016 to reach over CA$100B in 2017.

This might be cause for concern, but Statistics Canada’s Balance Sheet of Agriculture suggests not. It paints a picture of a sector that has had the resilience to get through a patch that has been bumpier than usual.

Statistics Canada’s latest balance sheet shows resilience in ag, even when going through a patch that’s been bumpier than usual.

I’ll look at how some financial measures from the Balance Sheet can be used to assess Canadian agriculture’s financial health, and why I believe the sector will be in good shape to end 2018 and head into 2019.

The decrease in the DAR to .15 means the ag sector funded CA$1.0 of assets with CA$0.15 of debt and was right on par with its 10-year average (Figure 1). Provinces from Quebec to Alberta drove the decrease, with the DAR lower than the 10-year average in each. 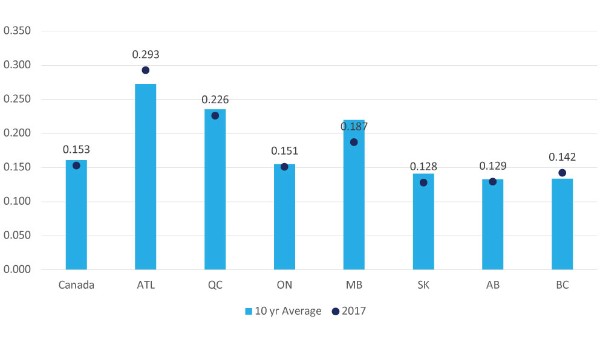 Pressures on liquidity trends were building, but manageable

Another key indicator of overall health is the current ratio, measuring liquidity. Even as debt has grown, Canadian agriculture could boast of good liquidity in 2017, with enough easily-convertible assets to cover all immediate debt. The sector’s strong current ratio (CR) of 2.27 in 2017 (Figure 2) means Canadian agriculture had CA$2.27 in current assets for every CA$1.0 in current debt. Although it also represented a 2.5% decline from 2016, and was lower than the 10-year average, it was still in a range we consider healthy.

Figure 2: Current ratios weaken across most provinces, but remain strong 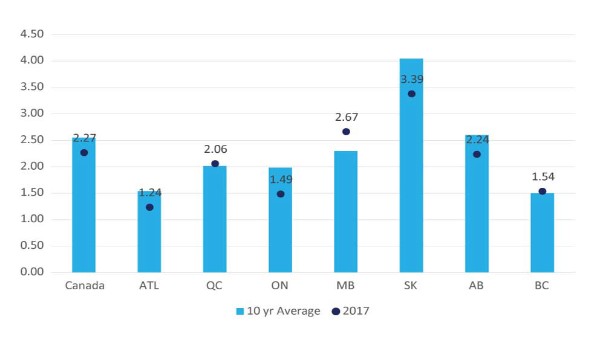 Only Quebec and Manitoba recorded year-over-year CR increases in 2017 and, along with British Columbia, had current ratios in 2017 that were higher than their 10-year average. Saskatchewan continues to have the highest CR of all provinces (3.4). That’s typical for the province because large grains and oilseeds operations dominate Saskatchewan agriculture. But even there, the 2017 CR fell below its 10-year average.

Because of price pressures on some crops, higher interest rates and farm input costs throughout 2017, current ratios for Ontario, Alberta, and the Atlantic also dipped in 2017 below their respective 10-year averages. Each, however, remains in a healthy range.

Saskatchewan, with the highest ROA in the last ten years, recorded a 21% decline in ROA in 2017, the country’s largest drop. Alberta also recorded a declining year-over-year return-on-assets and Quebec saw no change in 2017.

Figure 3: Even with the biggest drop from its 10-year average, Saskatchewan’s 2017 ROA still highest 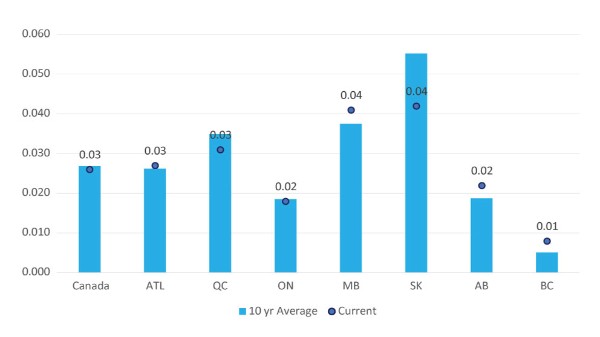 Elsewhere, the sector’s ROA increased from 2016. And strengthening net income improved the 2017 ROA in the Atlantic provinces, Ontario, Manitoba, Alberta, and BC to levels higher than their 10-year average.

Affordability of farmland continues to decline

Farmland values increased in 2017, totalling roughly 70% of all assets. Land prices, farm income and the relationship between the two vary across provinces but, in general, Canadian farmland, as measured by the land-to revenue ratio (LRR), has become less affordable.

Farmland values in Canada total about 70% of all farm assets in 2017.

The LRR measures the affordability of land using crop receipts (i.e., gross revenue from crops). Average land values and crop receipts are expressed on a per acre basis.

The pace of land value appreciation has exceeded appreciation in crop receipts since 2012. Given that more rapid increase, the LRR increased to be higher in 2017 than its respective 10-year average across all provinces (Figure 4). This suggests that land is expensive from a historical standpoint, but other factors must be considered. The downward trend in interest rates for most of the last ten years, wealth effects and expectations of future growth in agriculture can explain why the ratios are higher than their average.

Figure 4: The LR ratio increased across all provinces in 2017 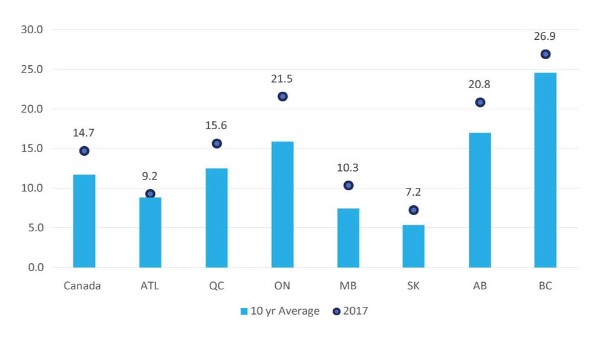 A few headwinds emerged for Canadian agriculture in 2018 and we believe Canadian ag is in good shape to weather the storm. The industry’s financials are strong despite some recent softening. And we project 2018 and 2019 revenues to approximate 2017 levels given the strength of global demand.

Understanding the industry’s exposure to possible fluctuations in the environment, whether from farm income trends levelling out or further interest rate increases, can help to avert financial hardship. By providing guidance to individual operations, that understanding will go a long way to maintain the overall health of Canadian agriculture.

Next week, find out how the currently rising interest rates will impact Canadian agriculture.

Amy joined the FCC Economics team in 2017 to monitor agricultural trends and identify opportunities and challenges in the sector. Amy grew up on a mixed farm in Saskatchewan and continues to support the family operation. She holds a Master in Applied Economics and Management from Cornell University and a Bachelor in Agricultural Economics from the University of Saskatchewan.