Lessons in financial resilience from the U.S. downturn 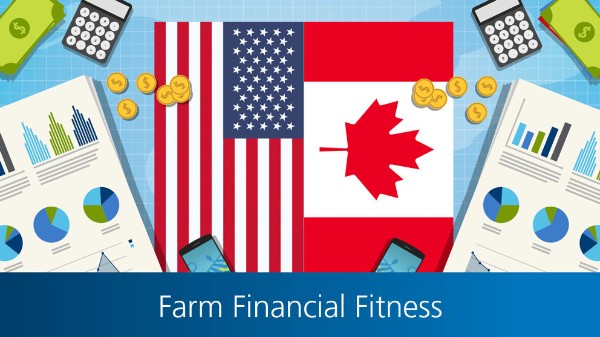 The slowdown in commodity prices since 2013 has hit the U.S. agriculture sector hard. Not surprisingly, their net cash income dropped 30% between 2014 and 2017. They managed to stay afloat though, thanks in large part to their success in reducing costs of production.

A similar emphasis will help Canadian producers weather any market disruption 2018 and 2019 may bring. Margins are expected to tighten in Canada in 2018. And because Canadian producers can’t influence prices, managing costs while working to become even more efficient on every acre will be key.

Costs of production will matter in 2018

Soybean and corn prices have been, on average, below the U.S. cost of production for several years. Producers adjusted to those low prices by reducing costs: total U.S. costs per acre peaked in 2014.

U.S. profitability and financial leverage in 2018 point to a weakening position

Although costs seem to be falling further, tight margins are expected to continue – until corn exceeds US$4 per bushel and soybeans exceed US$10 per bushel.  Average rents have also fallen, but they’ll need to decline further for U.S. corn and soybean farmers to be profitable. Tight profit margins in the U.S. have put a financial strain on the liquidity (the ability to pay outstanding short-term debt) of some operations more than their solvency (the ability to pay all debt, including both short- and long-term debt). Operations with working capital constraints in recent years have been able to extend the amortization of their loans, while negotiating more favourable interest rates on long-term debt.

This might prompt concern. The U.S. Federal Reserve is expected to increase interest rates three times in 2018, which will boost the value of the USD. However, estimated U.S. net cash income for last year is expected to be US$96.9 billion and the USDA estimates 2018 net cash income in the U.S. at US$91.9 billion which, if realized, would represent a 6.7% decline.

A Canadian advantage: the exchange rate

With U.S. producers possibly at a turning point, the outlook for Canadian agriculture remains more optimistic. As U.S. income tumbled, Canada’s farm economy remained robust, with a net cash income indicative of the difference in our health between 2013 and 2017. In fact, Canada set a net cash income record in 2016, after a decade of significant growth driven by strong global demand for agricultural commodities. Canadian net cash income in 2017 is estimated at $16.3 billion, another record.

And although the Bank of Canada is expected to follow the Fed with at least one hike to the interest rate in 2018, Canada’s pace of increase will be slower than that in the U.S.

The outlook also remains positive thanks to slightly better margins afforded through an advantageous loonie. While U.S. fertilizer prices tumbled 3% in 2017, Canadian prices declined 5%, pushed even lower due to a 2% appreciation in the loonie in 2017. We forecast 2018 input prices to remain flat.

Focusing on costs and efficiency is part of sound financial management, even during periods of strong growth. It’s safe to say that Canada’s 2018 net cash income will fall, and while margins may not tighten to the extent that they have in the U.S., producers always need to have a handle on the cost structure of their operation.

In fact, there’s an important lesson about financial resilience that Canada can take from the U.S. experience. Their working capital positions were strong heading into the downturn, and that allowed producers to weather the storm.

How resilient are your farm’s finances to a potential weakening economy? Never lose your focus on costs.