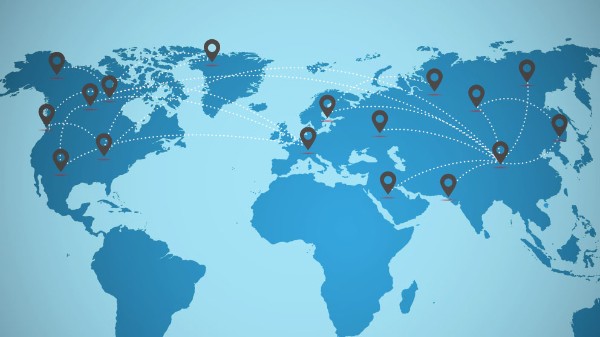 How growth in the global demand for food brings tremendous opportunities for the Canadian agri-food industry.

Investment grows at a rate slower than exports

The U.S. economy has remained a preferred destination for Canadian FDI. It captured a 64% market share of Canadian greenfield investments, up from 50% ten years ago. The U.S. market is an important destination for food and beverage exports, representing on average 77% of all exports between 2015 and 2017. This market share has remained relatively stable over the last ten years. NAFTA and proximity of buyers have made the U.S. an attractive export and investment destination.

Figure 1: Canadian greenfield investments into the U.S. increased in value and importance 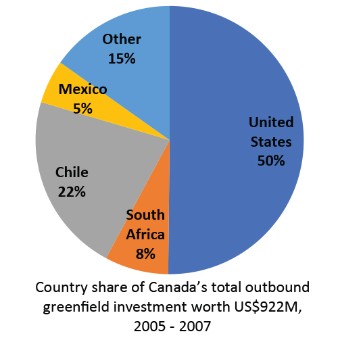 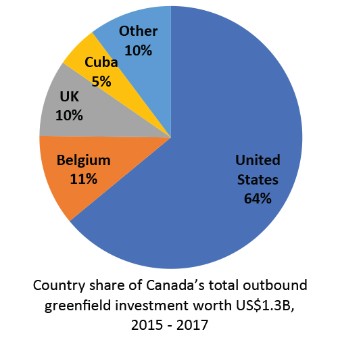 A supply chain perspective is fundamental to developing a strong performance in domestic and export markets. Foreign investment can help source higher quality primary products that otherwise are not grown in Canada (such as cacao) and invest in processing capacity to add value (producing chocolate for example). Exercising control in the supply chain through vertical integration or strategic partnerships can lead to traceability initiatives, something highly desirable by today’s consumer.

Chocolate is part of the ‘sugar and confectionary products’ category which grew substantially over 10 years (Figure 2). The fruits and vegetables processing sector captures a large share of all greenfield investments, and include initiative in potato processing, greenhouse, and beverage sectors. In this sector alone, FDI has risen by 55% over the 10-year period, increasing from US$544M in 2005-2007 to US$841M in 2015-2017. During that same period, exports of fruits and vegetables and specialty foods rose 50%, starting at US$3.3B and increasing to US$4.9B.

Figure 2: Fruit and vegetable processing sector dominates where Canadian greenfield investments are made 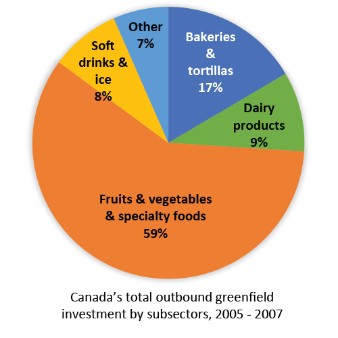 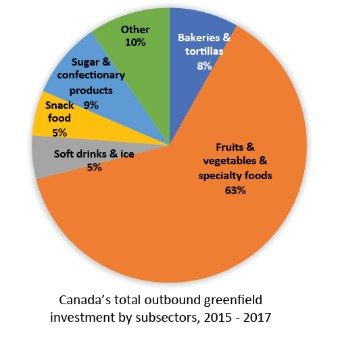 Exports and foreign direct investments are inextricably tied. Investments from foreign businesses into the Canadian food market increases competition for domestic food manufacturers but creates export opportunities across the supply chain that may not otherwise be present. Foreign investment leads to larger Canadian-owned global operations and raises our competitiveness. Together, inbound and outbound FDI can help the industry reach its ambitious food export goals.