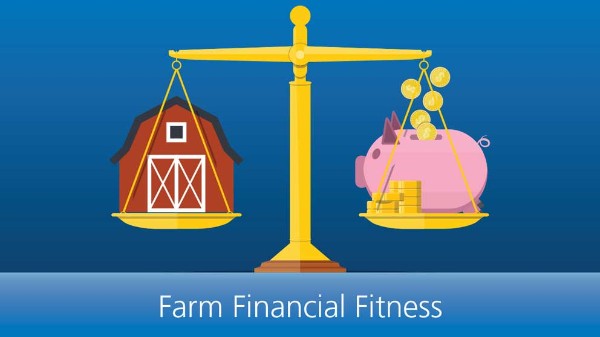 What a difference time makes. Borrowing costs climbed in 2018 from their historic lows one year earlier. Farm cash receipts flattened nationally over the same period. Throughout March, FCC Economics will make sense of these evolving financials and more. Check back weekly to see where Canadian ag is going – and how key financial tools can help you stay ahead of the game.

With Canadian agriculture’s total debt outstanding now over C$100 billion, we can ask some important questions about the value those liabilities provide.

Taking on more debt to finance the purchase of assets allows a business to expand and grow.  Paying off the debt is done with the additional revenues generated by properly deploying these assets. Reducing debt or seeing assets gain value over time are two ways to build equity or net worth. However, financing a large portion of the business growth through debt also exposes a business to financial risk. The last ratio I look at in our March Financial Fitness series, the debt to equity ratio, can answer the question of the long-term value generated by liabilities.

The debt-to-equity ratio indicates the ability of shareholder equity to cover all outstanding debt.

DE ratios can range broadly and still be considered healthy. Different levels of debt are required to take advantage of different sectors’ opportunities; what would be an ideal level of debt for one sector is less optimal for another. A low DER could indicate a mature operation that’s not seeking to expand or innovate. A high DER can indicate a highly leveraged business pursuing growth opportunities while being exposed to financial risk.

Figure 1 shows the average DER for dairy, hogs, cattle and grains and oilseeds between 2013 and 2017*. Each sector shows a healthy range of scores over a five-year period, reflecting its unique capital expansion needs and trends in revenues. 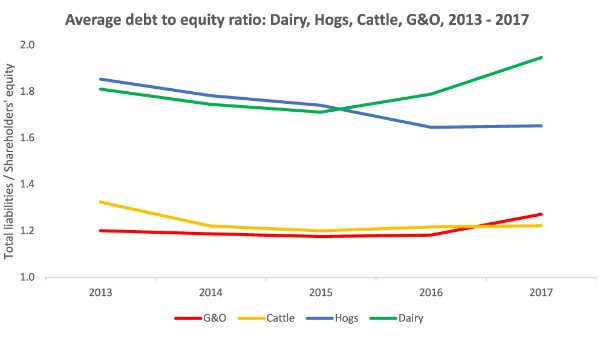 With a more predictable income, dairy producers can carry higher debt to equity than other ag sectors. As the demand for dairy products expanded, opportunities arose to expand production capacity starting in late 2014.

We’d expect the other three sectors shown here to have ratios lower than dairy’s: revenues for each of these sectors are more volatile and borrowing to fund assets and growth makes sense for these producers only during periods when such investment will offer profitable returns.

Cattle and grains and oilseed producers had low debt-to-equity scores each year between 2013 and 2017. The period was generally characterized by strong revenue growth for crop producers that enabled payback of any increase in debt obligations, and matching increases in farmland values.

Between 2013 and 2017, we see hog producers’ DER fall. Even at its lowest, it’s still higher than either cattle or grains and oilseeds. But it’s a great example of why we can’t compare across sectors and why, instead, we look only at a sector’s history. Hog producers’ five-year average of 1.74 compares to the sector’s previous five-year average of 1.96 and represents a continuing decline in DER since 1998. Canadian hog producers have steadily improved their net worth through periods of consolidation and investment.

What does the future hold?

Highly leveraged farms are more likely to show more volatile rates of return on equity. The debt-to-equity ratio shows how leverage amplifies the return – whether in good times or bad. Revenues will shift in 2019 when commodity prices respond to shifts in the demand for agricultural commodities. There’ll be opportunities that emerge in the year ahead that will have to be evaluated considering each operation’s exposure to financial risk.

There’ll be opportunities that emerge in the year ahead that will have to be evaluated considering each operation’s exposure to financial risk.

As with each ratio we highlight throughout this series, DER is only one view of the financial health of Canadian agriculture. Using different ratios together fills out the big picture. As well, using the average DER as we’ve done here doesn’t begin to tell the whole story, as it reflects both operations with recent production investments and higher DER scores, and more mature operations carrying lower debt levels (and lower DER scores).  Work with your lender and accountant to determine the suggested ratios for your specific industry and be sure to understand them according to your own strategy and the risks facing your own operation.

Are you comfortable using financial statements to better manage your operation? A good place to start is your accountant or an FCC Relationship Manager.