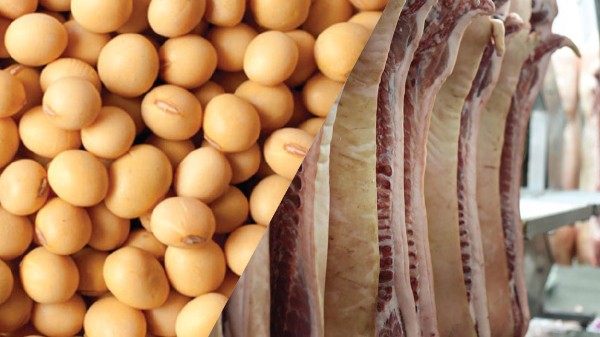 China-U.S. trade tensions have disrupted trade flows and increased price volatility in many agricultural markets. The November 2018 soybean futures price has fallen approximately 20% from US $10.50 at the end of May to around US $8.50 per bushel. Lean hog futures have also seen large declines in recent months, with the October 2018 contract reaching lows of US$ 47 per cwt in August. It has since partially recovered with the conclusion of NAFTA renegotiations and the outbreak of African Swine fever in China.

The movements in commodity prices are nothing exceptional considering the importance of China in ag markets: China is the largest soybean and pork buyer in the world. Export patterns have shifted, creating gains or increasing costs for importers and exporters. Where does Canada stand?

U.S. export patterns for soybeans and pork are disrupted

China has been purchasing close to 80% of Brazilian soybean exports over the summer, projected to result in an increase of 10% from 2017.  Efforts to reduce China’s reliance on U.S. soybeans include reducing domestic Chinese soybean stocks and adjusting hog rations to use either fewer soybeans or use alternative proteins like canola and peas.

The volume and value of U.S. pork exports to China remained relatively flat during the first four months of 2018 over 2017, however export volume and value declined approximately 40% during the May 2018-July 2018 period relative to the same time in 2017.  Trade tensions between Mexico and the U.S. did not impact U.S. export volumes much but had a negative impact on export prices.

Canadian pork exports to Mexico have increased 19% in 2018 versus 2017, while pork exports to China are down 17%. The outbreak of African swine fever may further amplify trade disruptions in the soybean and pork markets. A decline in the Chinese sow herd can lead to more exports and a weaker demand for soybeans.

In the short-term, global tensions shift trade patterns and prices fall. Despite additional Canadian export sales, the price impact usually outweighs any trade benefit. The long-term impact can be more meaningful. Continued tensions could open opportunities and lead to a stronger demand for Canadian commodities.

Check out the 2018 annual trade ranking report being released in November to learn about volatility in commodity prices and its influence on Canadian exports of agriculture and food products.