FCC Ag Economics will update its projections about profitability across three Canadian agriculture sectors (red meat, dairy, and grains, oilseeds and pulse) throughout July. We’ll describe what has happened in 2020 to-date and what to monitor over the next six months.

How we did for the first half of the year

The first two months of 2020 were very positive for both the pork and beef sectors. Strong consumer demand in both the domestic and global markets and the reduced global supply of red meats due to ASF supported hog and cattle prices.

While coronavirus was on our radar as a major threat, we didn’t anticipate how big of a global disruptor it would be, negatively impacting both supply and demand for red meat.

COVID-19 caused a global recession. In North America, processing plant disruptions led to a backlog of animals and concerns about pork and beef availability at grocery stores. And confinement and the foodservice shutdown significantly weakened meat demand.

The large supply and demand shifts introduced a massive swing in producer prices for cattle and hogs. As a result, the average livestock prices for the first six months are generally lower than our January forecasts (Table 1). One exception was 550 lb. steers in Ontario, as disruptions were minimal in the Ontario market. Downward price pressures led to negative margins for results for hog producers and cattle feeders. 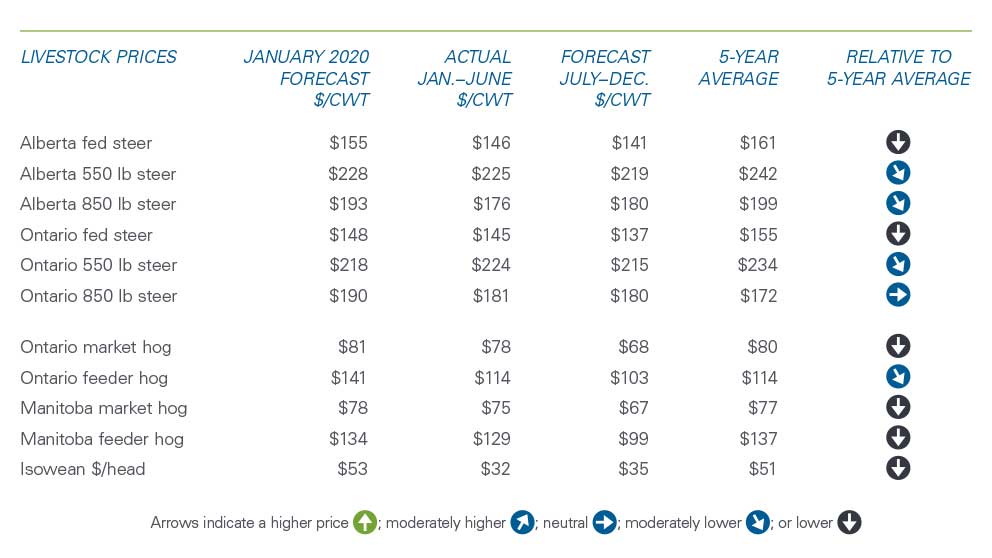 Our revised forecasts show that prices will be down across most commodities compared to the five-year average and our initial forecast. It shows:

Processing facilities have largely resumed their full operations, but with higher costs due to social distancing and other health protocols within plants. But there are still backlogs of hogs and cattle to process. The Canadian hog industry appears to be on-track to process or export the backlog of hogs in 2020.

Conversely, the massive backlog of Canadian cattle makes it very unlikely for the industry to successfully work through the entire backlog by domestic processing or export in 2020.

The expected increase in red meat production out of the U.S. appears to have vanished. U.S. beef production was expected to increase by 1.2% in 2020 but is now expected to drop 1.8% according to the June WASDE report. This change is a substantial turnaround from the 5% decline projected from May due to a faster recovery in processing capacity.

North American economies are re-opening at various paces and will increase pork and beef demand. However, proceed with caution. The U.S. is currently seeing a resurgence of COVID-19 cases across many populous states - and the effects of a possible second wave are unknown.

We don’t expect restaurant demand to return to pre-COVID levels for an extended period. Yet the demand for red meat appears strong despite the retail inflation (YoY increases of 13.7% and 6.0% for beef and pork, respectively). Red meat inflation should ease, but COVID-19-related costs at the processing and retail levels are expected to keep inflation above average.

ASF is now present in 50 countries worldwide and supports prices as Canada produces more than twice as much pork than we consume domestically. Many countries limit imports from suppliers with ASF and China is a major export opportunity for Canadian pork. Exports throughout the first five months of the year were 56% higher than for the same period last year.

FCC Ag Economics forecasts that the cow-calf sector would be near or slightly above break-even for 2020. Losses are projected for feedlot operations throughout 2020. Profitability for hog farrow-to-finish operations is expected to be somewhat below break-even for the remainder of 2020, before regaining consistent profitability in 2021.